In order to do something that has never been done before, you not only need to start thinking outside of the box, you need to start examining your task deeper. I had to realize not only the creature I was up against, but the conditions and water I was fishing as well. The Porbeagle Shark is a very elusive fish. It is rarely seen, heard of or caught. I had to go beyond the Wikipedia articles and fishing reports on the net. My first real step into turning my visualization into a reality was contacting James Sulikowski, a renowned marine biologist at the University of New England. Sulikowski is one of the leading shark experts in the Northeast and has been on Shark Week on numerous occasions. He was essential in teaching me about the species, beyond just the broad internet information I could find. I learned what these fish were eating, where they were migrating, at what water depth/column they would be found depending on the time of year as well as their habits. I then began reaching out to local tuna fishermen, some of which starred in ‘Wicked Tuna’. The reason being for this is that tuna fishermen often catch porbeagles by accident. As a result, I began adopting some tuna fishing techniques. No longer was I tying knots, I was crimping, and no longer was I using commercial shark rigs, I was making my own from wire cable and using squid skirts to hide hooks. I attached chum bags to either side of my kayak as well.

The day was October 1st. Something truly felt different about this trip. I made my 5 am departure into the chilly waters of the Cape Neddick River and into the gulf. Two hours later I found myself in more than 200 feet of water, and I was chumming heavily. It was a beautiful fall day, but the wind was picking up with every hour. After more than 7 hours of nothing, I began to consider making the trip back in to shore, my chum was almost completely dispersed, and I knew the ride back home would prove to be challenging. ZIINNGG. Line began howling out of my free spooled reel at an inconceivable rate. My heart felt as if it had pounded itself right out of my chest. This was it, I thought, this was the porbeagle, and all that hard work and research was about to pay off! I set the hook, and the 45 minute battle ensued. Run, run run. Dive, dive dive. The fish was acting uncontrollably sporadic. The unknown angry monster had no actual identity until I had tired him out and got him close enough to the boat.  I took a deep breath and gathered up enough courage to take a peek below the 12 foot piece of plastic I was floating on. It was a long and slender specimen. Turns out it was a blue shark and it had dragged me all the way over into Ogunquit waters. I spent a few moments with the shark before I released it, and I must say, being on a kayak with that fish so close on the side of me, was the most humbling and beautiful collection of seconds I have ever experienced. The shark’s eyes sported no character, just darkness. A true predator from fight to finish. 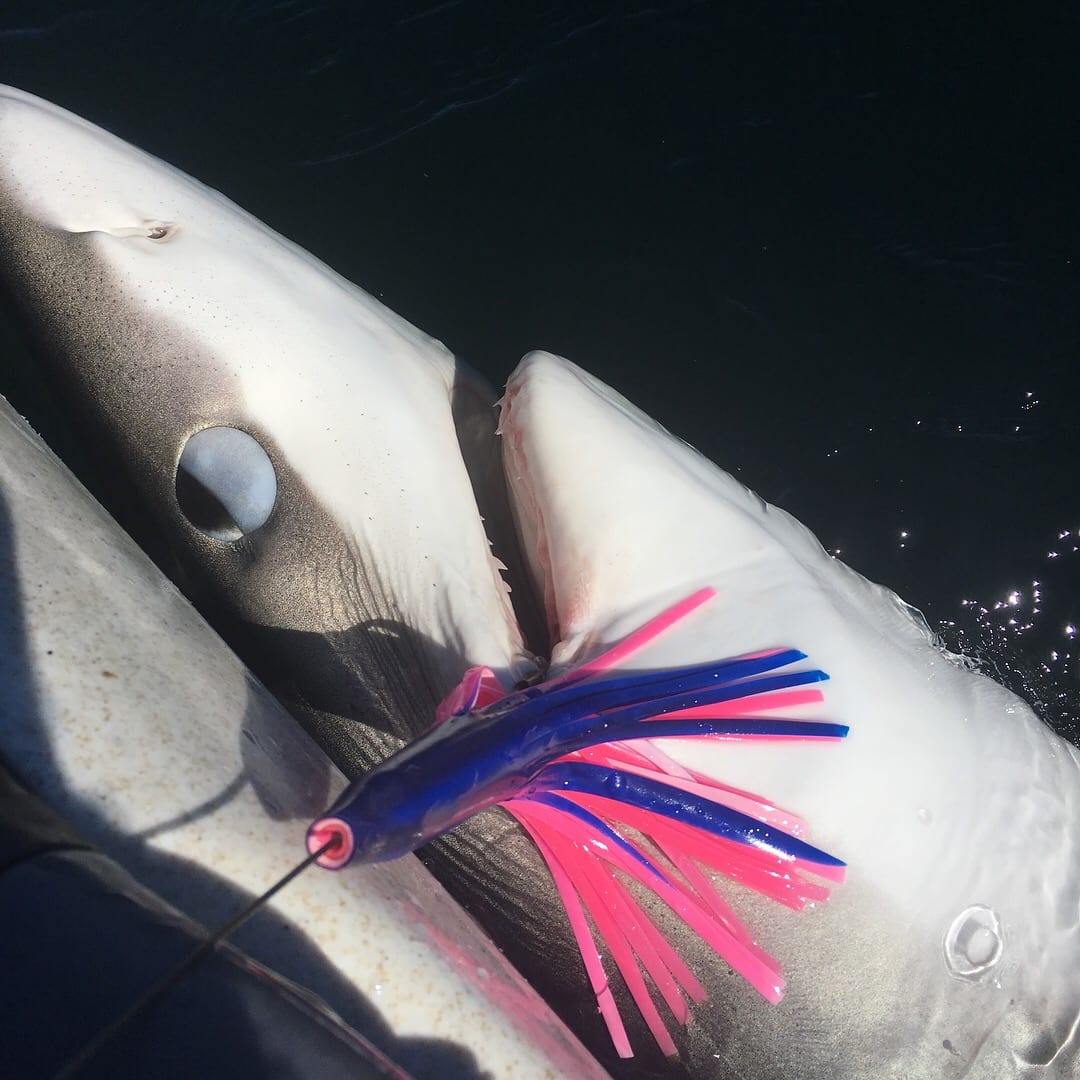 That long paddle back to shore was probably the happiest I’ve ever been. Although, a blue shark was not what I was looking for, to me the experience solidified to myself that what I was doing was achievable, and not that crazy of an idea at all. My friends and family began to take me a little more seriously after that series of events too. I celebrated the blue shark for a night, but the next morning it was back to business trying to further gameplan for the elusive porbeagle. 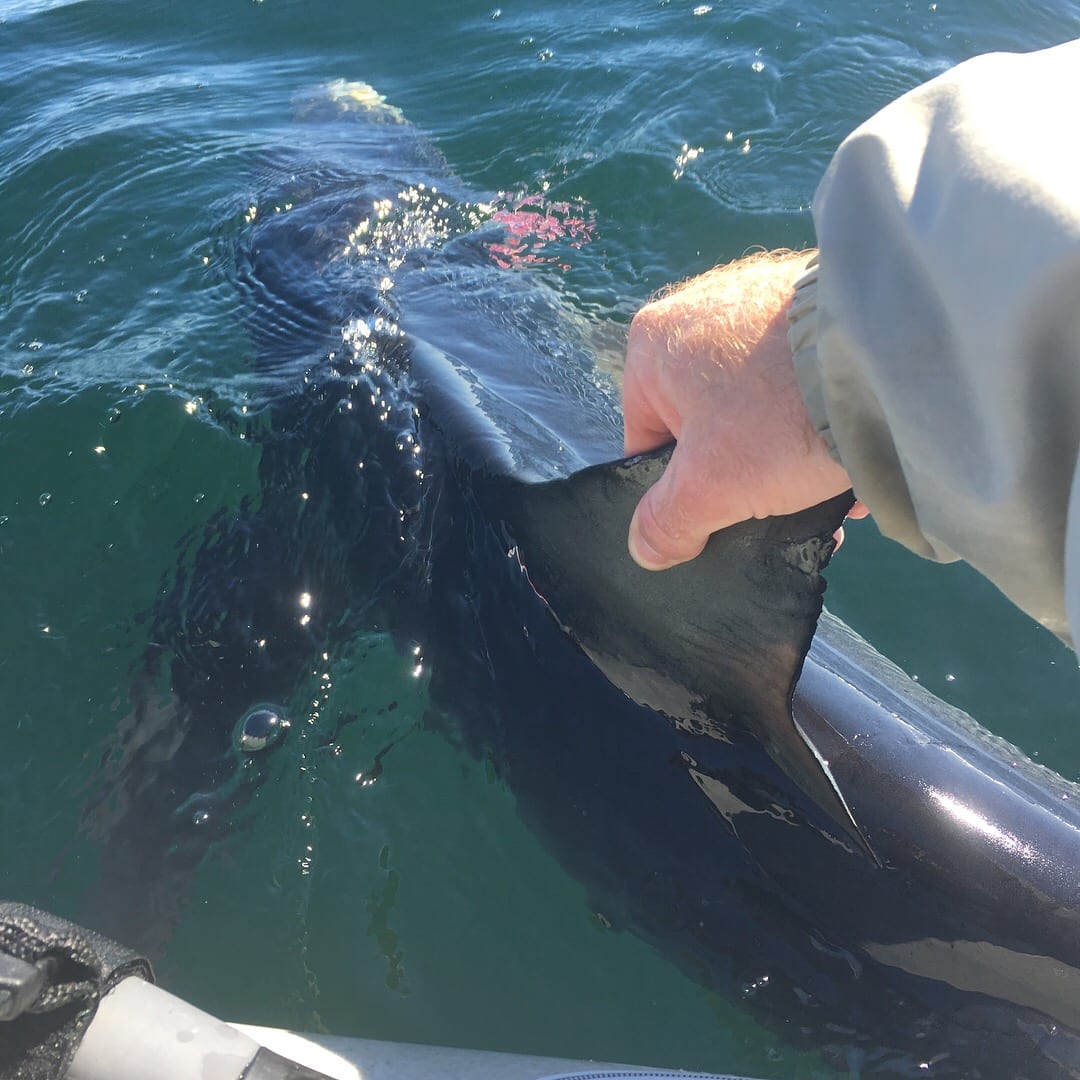