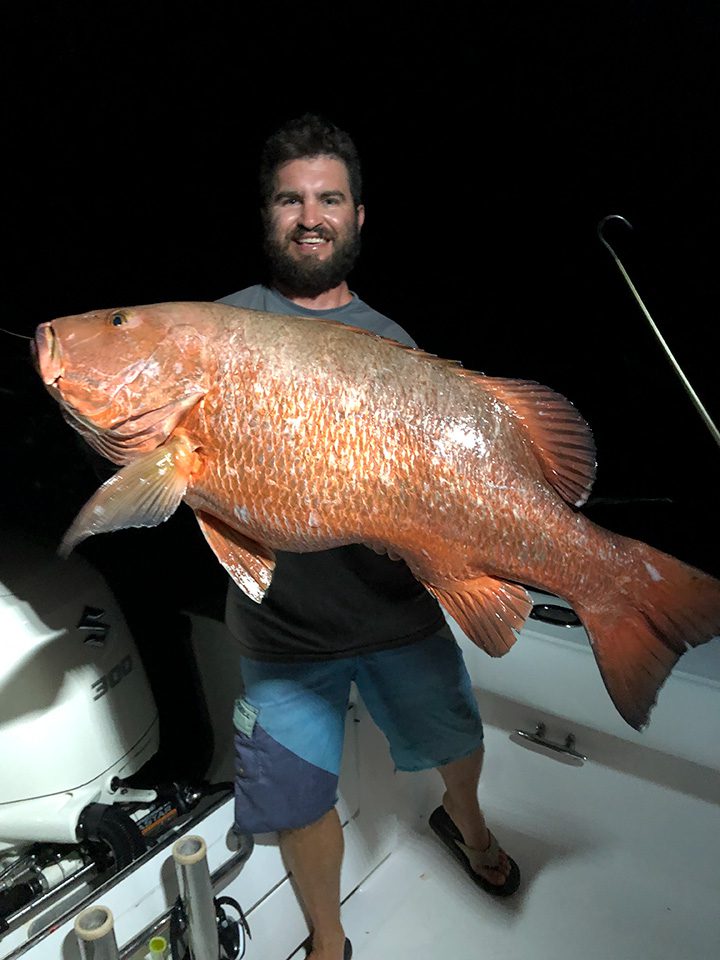 In addition to the patriotism, God bless America, I look forward to July all year long for another reason, the cubera spawn and the start of lobster season! How are these two events related?  While everyone else is clamoring for the mini season opener so they can sear Florida spiny lobster with butter and garlic, I am filling my bait well.  Lobster are by far the absolute best bait for the cubera snapper!!

The cubera is a true sea monster. It is the biggest fish in the snapper family.  They have huge scales, almost alike a tarpon, unbelievable power and long sharp fangs.   They can grow up to 100 lbs, but most of the cubera that we catch are in the 40-60 lb range.

We target the fish on wrecks in 150 – 280 feet of water.  The best times are before, during, and after the full moon. Although lobster is king, they will also hit big pinfish, grunts and blue crabs. If the full moon happens before lobster season starts, like it will this year, we go and catch Spanish lobster.  At night during a slack tide, we’ll dive the jetties and pick up as many of these tasty treats as possible within the short window between the fast water.

We try to use the smallest “legal” spiny lobster or the biggest Spanish lobster we can find. Keep in mind that just because you are using them as bait you are not excluded from the laws that govern the legal taking and possession of lobster. Having said that, I like to bring as many baits as are legal.  A lot of the times the fish will get eaten by sharks during the fight or the lobster gets picked on the way down.

We use conventional reels, 50’s and 80’s and some people even use 130’s.   We have them spooled with 80 lb braid.  The rig is 15-20 ft of 200 lb mono leader with a crimped stinger rig of (2) 16/0 J hooks.  The lead is a 32 once bank sinker attached to the rig with a rubber band at the top of the leader where it meets the main line.   To rig the lobster, push the first hook on the stinger rig through the bottom of the tail so that it protrudes out the top of the tail shell.  Then secure the second hook on the fat part of the antenna with a zip tie.

We drop the bait all the way to the bottom and then raise it 20-30 ft off the floor. When you get hit, it will feel like you hooked a freight train.   You have got about 20 seconds to turn him before he gets into the wreck and breaks you off. Once you get him up to the boat cross your fingers, usually the sharks are brutal.   When you see the sinker, secure it and grab the leader.   You will have to hand line the fish the rest of the way up as the large crimps won’t fit through the eyes of the rod. Have the gaff ready.

Cubera can be targeted inshore too, although the fish are typically smaller, usually from 8 to 12 lbs.  You can find them earlier in the year on rocks and jetties and heavy structure.  We normally fish them on an incoming tide and mostly with finfish and crabs.