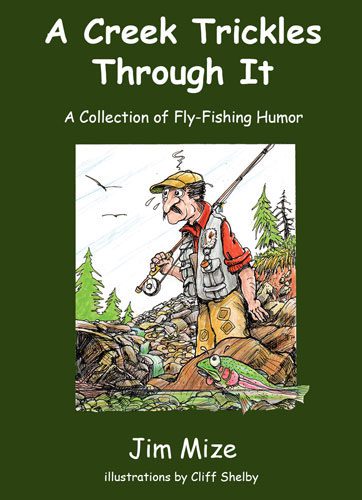 Chuck Norris jokes have had a longer life than, well, Chuck Norris. Websites proclaim his supernatural powers, his intimidating spirit, and his total mastery of his universe.

We’ve heard that “when the boogeyman goes to sleep at night, he checks his closet for Chuck Norris.” When Chuck Norris campaigned for Mike Huckabee, National Public Radio reported that the press would pass the time telling Chuck Norris jokes. One of them went like this: “Didn’t you know that Huckabee’s bumper stickers don’t have glue on them? They stick to cars because Chuck Norris told them to.”

A while back, Chuck Norris began making a comeback, as if he ever went away, by endorsing a laundry detergent. “Chuck Norris approved – a lot of fight for a little dough.” A detergent so powerful it “makes grass stains stain themselves.”

It all does make you wonder what would happen if Chuck Norris fly-fished.

For example, if Chuck Norris fly-fished, would carp pucker on both ends?

Chuck would probably save a lot of money on tackle, because he would only need one rod. It would train to whatever weight he wanted and flex where he told it to.

None of his tackle would dare malfunction. If his waders leaked, it would be because they wet themselves.

The knots in Chuck’s leaders would never give way. That’s because he’d seal his blood knots with real blood.

When Chuck fished, every fish would spook. Still, they would bite if he told them to.

I’m not sure what fish would be his favorite, but I can tell you he wouldn’t bother with weakfish.

Fishing, for Chuck, would be simple. That’s because the hatch would match him. Trees would hand back his flies. Chuck’s fly line would be afraid not to turn over. If he ever had a wind knot, it would be in the wind. Chuck wouldn’t need backing; that implies the fish is winning.

Can you imagine Chuck in a bar after a trip? He wouldn’t tell fish tales; his stories would be documentaries.

Chuck would never have to wear sunscreen. His skin is SPF-100.

Nor would he need a wading staff. Not even high water can take him down.

Miss a strike? Not Chuck. If his hook didn’t get them, his roundhouse kick would.

If a DNR officer bothered to check Chuck’s license and it had expired, that would only mean the calendar made a mistake.

If Chuck tied flies, it would be with their hands behind their backs.

I suppose, just for the challenge, Chuck would gravitate toward saltwater. For instance, if he ever fought a swordfish, he’d use a real sword.

Finally, the fish would know they were up against a karate master. All the world would be his dojo. So when he bowed to a leaping tarpon, the tarpon would bow back.

“If Chuck Norris Fly-Fished” is an excerpt from Jim’s award-winning book, A Creek Trickles Through It. You can find his books on Amazon or purchase autographed copies at www.acreektricklesthroughit.com

Award-winning author, Jim Mize, has written a humorous book specifically for fly fishermen. Titled, A Creek Trickles Through It, this collection delves into such topics as carnivorous trees, persnickety trout, and the dangers of fly-tying. This book was awarded first place in the Southeastern Outdoor Press Association’s Excellence in Craft competition. Whether you are an arm-chair fisherman or one with well-earned leaky waders, it will be a welcome addition to your fishing library.

Jim has received over eighty Excellence-In-Craft awards including one for his first book, The Winter of Our Discount Tent. His articles have appeared in Gray’s Sporting Journal, Fly Fisherman Magazine, Fly Fishing & Tying Journal, as well as many conservation publications. You may order copies through Amazon or get autographed copies from his website at www.acreektricklesthroughit.com