Flamingo, Costa Rica: With a record fleet of 20 boats and 91 participating anglers, the fourth annual Presidential Flamingo Fishing Rodeo posted some amazing numbers. Held August 10, 11, 2019, the tournament’s anglers released 81 sailfish and fourteen blue marlin amid near perfect weather conditions. There were also 17 family teams participating in this year’s event, thanks in large part to a very family-friendly format that favors lady and junior anglers in a low-stress fun environment.

Taking an early lead on the first day of fishing was Team Top Fly. The husband/wife team of Anki and Kurt Forsberg put 7 sailfish on the board.  However, Team Lupo came on strong with a blue marlin and 2 sailfish plus the addition of a 46 pound tuna to top the Day One fleet.

Day Two belonged to Seacario. Michael Moretti and team got into the sailfish and pulled out a win in the Top Billfish Division topping Huntress  on time.. Huntress was not to be denied the Top Offshore Award. The Huntress Team put 6 sailfish, two blue marlin and a 61 pound Mahi on the board to sweep the Top Offshore prize.  Fishing on the Huntress, Lori Schroeder captured the Top Lady angler award and clinched the Top Family for Team Schroeder.

The Parker Family on Georgia Rican weighed 3 tuna which put them in a strong third place at the end of Day 1. The Father, Son and Friend team went on to win the Inshore Division over the Suarez Family on Yellowfin III.  Catalina Suarez, seven years old, became our first ever Top Junior Girl angler and released a nice roosterfish to claim the Roosterfish Release Trophy. Scott Dunlap fishing aboard the Fish Tale II pulled in a 84 pound yellowfin tuna to win the Heaviest Tuna of the Tournament

The tournament’s social functions were also well-attended this year, from the great kickoff party at Marie’s Restaurant in Flamingo, complete with live music. The awards celebration, auction and party was hosted by the newly refurbished Margaritaville Beach Hotel. The Presidential Flamingo Fishing Rodeo benefits several important charities, including Abriento Mentes, a group that assists local residents in the Guanacaste Province with employment opportunities and continuing education, as well as The Billfish Foundation, promoting conservation in Central America and throughout the world.

The Presidential Flamingo Fishing Rodeo features a low entry fee and a family-friendly atmosphere that’s perfect for ladies and junior anglers to experience the fun of tournament fishing without the stress associated with a big cash prize. The event also highlights the outstanding summer fishing in the northern Pacific around Flamingo.

The participants were also excited to learn that construction is scheduled to begin on Marina Flamingo within the next few months. This will greatly expand the opportunities for fishing and boating throughout the region.

The 2020 dates of the Presidential Flamingo Fishing Rodeo are August 14-16, 2020 so make plans now to attend. For more information, visit www.preschallenge.com.

Over the American Independence holiday, Coastal Angler Magazine – Costa Rica Publisher, Michael Erickson was proud to honor a US serviceman and his wife who were vacationing at Los Sueños Resort. Teaming up with the charity Freedom Alliance, Michael treated Fred Walters and his wife Nikki to a day fishing on Dreams II, a 32’ Luhrs Express. Fred had recently returned from a deployment in Afghanistan and enjoyed spending quality time with his wife as they caught nine sailfish! 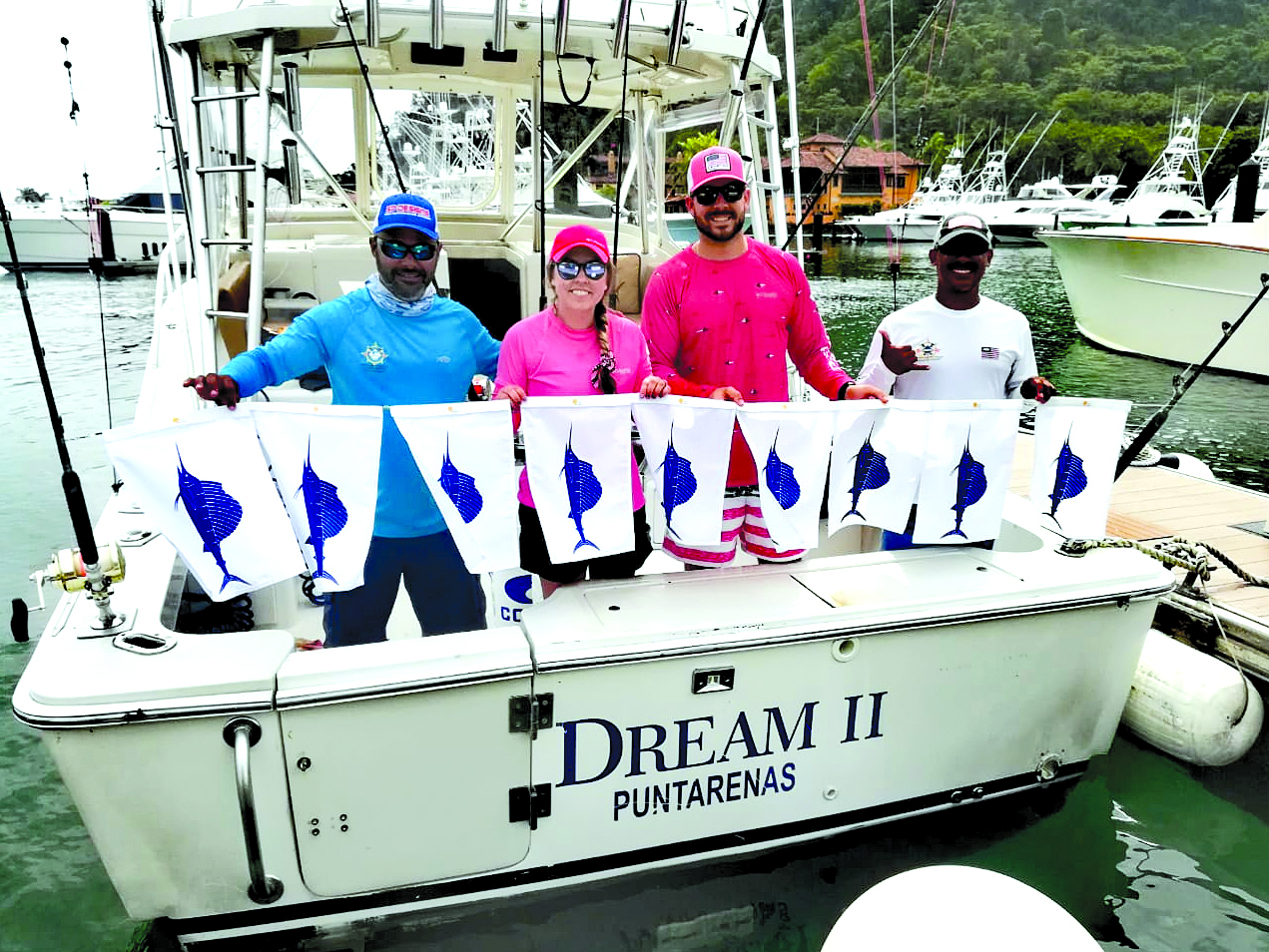 Freedom Alliance is well-known around the marina at Los Sueños for hosting an annual event in April that brings together wounded veterans from all over the United States to participate in what they call the “Heroes Vacation”. The community support is so great that earlier this year, Freedom Alliance launched another program for those wounded in Iraq or Afghanistan that combines sport fishing with a series of structured talks. It’s called the Freedom Alliance Offshore Experience and you can learn more by visiting www.faoffshore.com.

“I am forever indebted to Mike Erickson, the crew of DREAM II, Jim Stewart, Pepper Ailor, and the entire Freedom Alliance enterprise. The experiences my wife and I were afforded by these selfless individuals will be impossible for us to ever duplicate. The transition from being wounded in Afghanistan to catching sailfish in Los Suenos in only a matter of five weeks was a surreal experience incapable of being appropriately put into words on paper. The peacefulness that Costa Rica offered, in contrast to the chaotic Afghanistan combat environment, was therapeutic and instrumental in my recovery. I appreciate everything you all do for veterans and active service members and I hope to see you again in Los Suenos sooner than later. Thank you for being Americans worth fighting for. Pura Vida!”