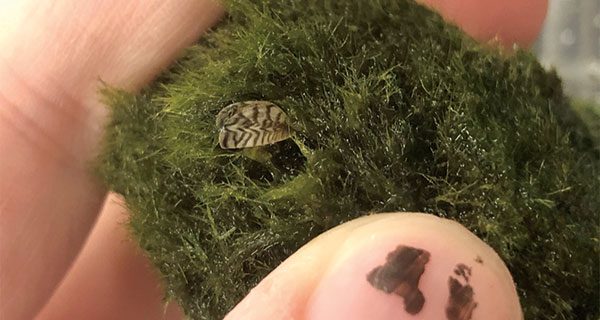 NASHVILLE – The Tennessee Wildlife Resources Agency, alongside other state and federal wildlife agencies, is alerting pet and aquarium store owners and customers about the finding of invasive zebra mussels in products known as “moss balls.”

Most major pet stores have already pulled these products from shelves. However, consumers should always be cautious about products purchased online. It is illegal to purchase, possess, or transport zebra mussels.

The products, “Betta Buddy Marimo Ball” and similarly described products, were imported and have been distributed nationwide in the United States. Aquarium owners who have purchased and used “moss balls” should follow disposal and disinfection guidelines described by the U.S. Fish and Wildlife Service at https://www.fws.gov/fisheries/ANS/zebra-mussel-disposal.html. This guidance suggests freezing the products in a plastic bag for 24-hours or boiling the products for at least one minute and discarding in the trash.

“Aquarium owners should never dump an aquarium into a body of water or into drains that may lead to local waters,” said Cole Harty, TWRA Aquatic Nuisance Species Coordinator. “This situation shows how easily an invasive species could be introduced by someone improperly disposing of their aquarium contents.”

Although zebra mussels are already present in numerous bodies of water in Tennessee, including the Tennessee and Cumberland rivers, actions should be taken to prevent further spread of these invasive mussels in Tennessee and beyond. In addition to proper disposal and disinfection of aquaria, boaters and other resource users should take steps to clean, drain, and dry equipment between outings.

More information on zebra mussels and other invasive species in Tennessee can be found on the TWRA website, https://www.tn.gov/twra/fishing/twra-fish-species/zebra-mussel.html.