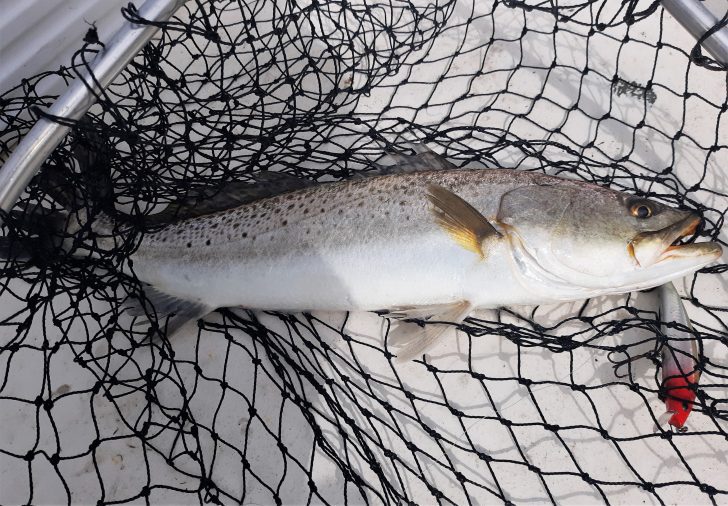 Great fishing will resume at Keaton Beach in March, as water temperatures rise into the 60’s early in the month, and then hold 70 degrees later on. Suspending baits will catch fish in early March with Catch Jrs. Catch 2000’s and MirrOdines taking front stage.

Mid-March will see a diversity of artificial baits producing trout & reds as warmer temps bring fish out of their winter doldrums. Bite-a-Bait Fighters, Cordell Redfins and other lipped hard jerkbaits will be the ticket then.

I plug-fish with TrikFish 12 lb. test X-rated Co-Polymer line for longer casts in clear water. This low stretch TrikFish Co-polymer has a smaller diameter and greater sensitivity than regular monofilament, yet doesn’t tear lose big trout like braid is likely to do.

By the end of March, we should see Gulf water temperatures holding around 70 degrees, which opens the door for pelagic bait to show up from the south. The presence of these bait schools trigger the topwater bite with stickbaits, propbaits and chuggers, taking trophy trout from the shallows.

Don’t forsake soft plastics in March, as Assassin’s 5-inch shads, rigged-up un-weighted, on a 5/0 offset worm hook are a perfect choice in March. Whether you fish them as a primary bait, or as a follow-up lure behind missed strikes on topwater plugs, they will take a lot of fish this month.

Redfish should be showing up in greater numbers out on the flats and the arrival of pelagics will turn them on as well. Weedless spoons, such as the Flats Intruder HEX spoon in the 1/2 oz. Gold and Copper, will be my Go-To bait of reds in March.