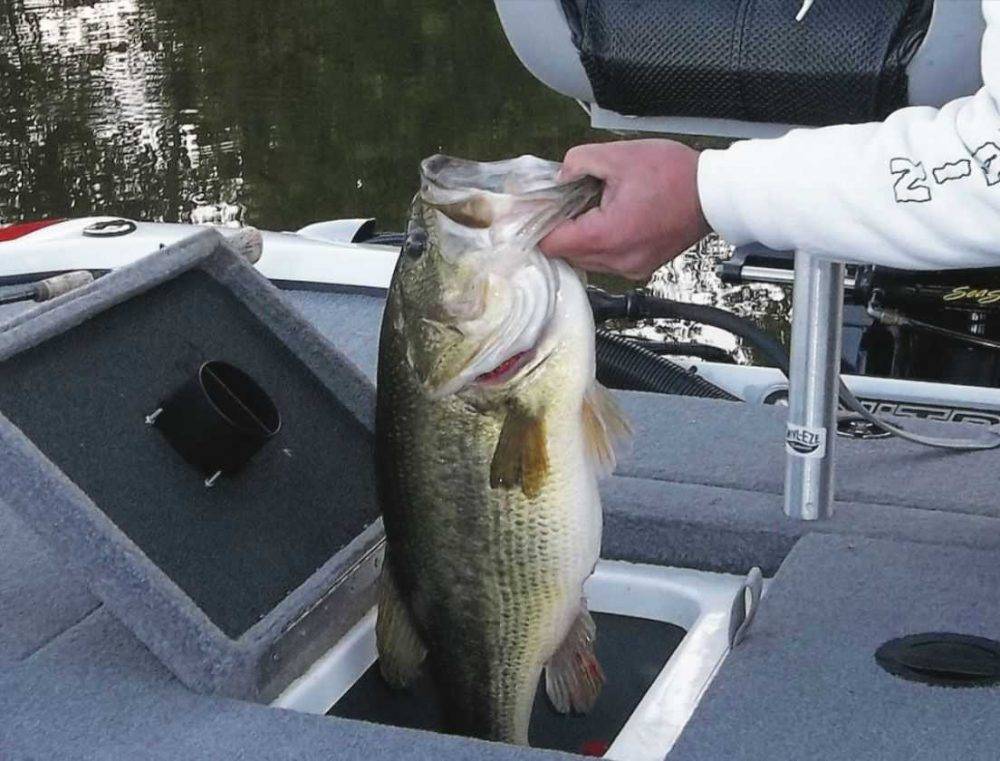 For most of the nation when one mentions springtime one thinks of warming temperatures, cold streams fed by recently melted snows and fish breaking out of their lethargic winter state. But here in Florida, by mid-March the air temperature has already climbed to over 90°F. By the time April rolls around water temperatures in the shallower lakes will be approaching the 80’s if not higher. So now is the time to revisit your livewells and prepare for summertime conditions.

When keeping fish for catch-n-release tournaments in livewells, there are three factors that have a direct correlation to post- release mortality, they are oxygen levels, water temperature and water contamination. To give the fish the best chance for survival all three factors must be considered.

The single most important factor in keeping your fish alive is to maintain sufficient oxygen levels in the water. During its battle to stay out of the hands of the angler, a fish utilizes all of its physical resources in its fight or flight reaction and its muscles burn sugar which results in a build-up of lactic acid. So immediately upon being placed into the livewell the fish begins replenishing its oxygen reserves to break down the lactic acid and return to a more balanced state. The bigger the fish the more oxygen the fish will consume. Therefore you need to continuously aerate your livewell to ensure the fish has sufficient levels of oxygen. Many anglers wait until they caught the first fish of the day to begin filling and aerating their livewell but this practice in hot weather could be too little too late to a spent bass. You should begin the tournament by filling your livewell with cool morning water from the lake and continuously aerate the well throughout the day.

The second most important factor is the temperature of the water in the livewell with respect to the lake’s temperature. According to research, B.A.S.S. and the FWC, the rate of fish mortality drastically increases once ambient lake temperatures reach 75°F. Here is where we Floridians need to be vigilant. Just because the calendar says April doesn’t mean we don’t have  to watch the temperature in the well. Most bass boats are made of fiberglass and their decks are protected with heat absorbing carpeting so it doesn’t take much time under the hot sun to super heat the water in the livewell. Ideally it would be nice if all livewells came equipped with temperature gauges and recirculating coolant systems making temperature control simple and carefree but they don’t. So we need to do it manually. According to research and generally accepted practices, the preferred water temperature in the livewell should be between 5° to 10°F below that of ambient water temperature measured at 2-feet below the surface. Any cooler and the fish may go into shock and though it might not die in the well, its chances of long term survival will be diminished.

So what is the best method of keeping the livewell temperature down, a thermometer and ice. There are a wide variety of thermometers or temperature measuring instruments on the market. You could hard-wire one into your performance console, you could float one in the water, or you could use an infrared measuring gun. Any one will get the job done. As for adding ice to the livewell, the key is to add ice made from non-chlorinated sources. As many of us learned when we were kids, putting Skipper the goldfish in a bowl of fresh clean tap water resulted in a floating goldfish and a quick dash to the pet store by Dad to buy a replacement. The same is true for Mr. Bass, adding chunks of chlorinated impregnated ice to your livewell could spell the demise of the bass. Ice made by city water supplies will most likely contain chlorine so unless you know that the local ice vendor is not using municipal water, don’t place ice from the local gas station or convenient store directly into your livewell. The simplest solution is to fill plastic bottles or jugs with tap water at home and freeze them. Then place them in an ice chest onboard your boat and use them as needed. How many you’ll need will depend on the size of your livewell, the temperature of the water, and the heat gain of your livewell. Without going through the math, a 1⁄2 gallon of ice will lower a 15-gallon tank by almost 4°F. How long the water will remain cool is dependent on whether your tank is insulated or not, how much heat the tank gains as the result of the sunlight heating your boat’s deck, and how many fish you have in the well. Once you’ve cooled the livewell to 5° below the lake’s temperature, maintain the tank’s temperature with some smaller bottles of ice such as 16 or 20-oz bottles. This will counter the hourly heat gain of the tank without driving the temperature beyond the 10° threshold. After a few days of fishing, you’ll quickly learn when to replenish the ice and by how much.

The third critical factor in reducing fish mortality is to maintain the water quality in the tank. The fish in your tank will be under considerable stress and recovering from its fight and will be releasing large amounts of carbon dioxide (CO2) and ammonia into the water. If they happen to regurgitate their last meal or two, this too will add to the contamination in the livewell. The level of CO2 can be controlled by aerating the water but the ammonia cannot, so it needs to be flushed out. Depending on the number of fish in your well and the size of your well, the rule of thumb is to exchange one-half of your well water with fresh lake water every three to four hours. After which you will need to cool down the tank once again by 5°. Remember, the bigger the fish the more toxins it will excrete and the more you will need to recirculate your tank.

These three criteria are the critical factors in maintaining the fish in your livewell but there are other things you can do to improve the survivability of your catch. One is the use of additives that aid in fish recovery. The simplest additive is non-iodized salt such as table salt or rock salt. Salt stimulates the rejuvenation of the fish’s slim coat which protects the fish from bacteria, viruses, and other harmful organisms. The salt will also help the bass maintain osmotic balance which is the exchange of electrolytes in its blood stream. The recommended concentration should not exceed 1/3 cup per five gallons of water. However when using salt or any of the commercially available products they must be used separately and not combined with any other product. If you combine products you could end up exceeding the safe limits of these chemicals and kill your fish. Also if you use oxygen generators in your well, not to be confused with aerators, do not add salt to the water. The interaction between the oxygen generator and the salt results in chlorine as a by-product which will kill your fish.

Though maintaining a healthy livewell is important in ensuring your bass lives to fight another day, how you handle your fish is equally important. Proper fish handling is a whole discussion in itself but some of the keys points are: don’t play the fish until it is exhausted; protect the fish’s slim coat by not placing the fish on a hot boat deck or dragging it across the boat’s carpet; wet your hands before touching the fish; use knotless fish nets; do your best to dehook the fish; and when releasing the fish back into the wild, support the fish until it regains its equilibrium and swims away on its own.

Considering the large number of fishing clubs and tournaments in the Okeechobee area, it is every angler’s responsibility to ensure the survivability of their catch and to protect our fish stocks in order to maintain our title of the Fishing Capital of the World.