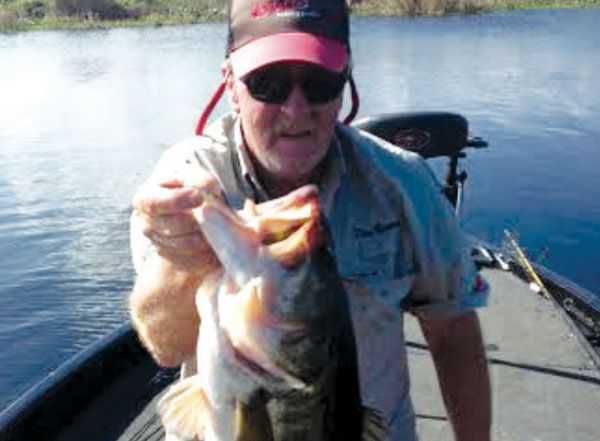 Twenty years ago, when I moved to Avon Park from Jupiter, Florida, I kept hearing about Lake Walk-in-Water in Polk County. I remember I’d read something about it in the newspaper, or I’d run into a fisherman at another lake who would mention it, but no-one seemed to know where it was.

I figured it must be somewhere north of Highlands County, but when I looked at maps, I still couldn’t find it. Finally, after an internet search, I realized that Lake Weohyakapka in Polk County was locally known as Lake Walk-in-Water.

Stories circulated about 50 and even 100 bass being caught out of this 7,528 acre lake in a single day and I had to find out for myself. Part of the Lower Kissimmee Chain of Lakes, Lake Walk-in-Water is a relatively shallow freshwater, spring-fed lake. Tiger Creek flows into the lake from the southeast, and Weohyakapka Creek flows from the north end of the lake, through forested floodplain, into Lake Rosalie.

The largest lake in Polk County, with an average depth of only 5 feet, the Lake Walk-in-Water that I first visited in the late 1990’s is a much different lake than it is today.
On my first visit to the lake, I was surprised at how well hidden the lake actually was. It seemed to be considerably ‘off the beaten path’ and yet upon arrival, based on the large number of trucks with empty boat trailers, it was pretty obvious that I wasn’t the first to discover it. My first couple of hours confirmed why so many fishermen were there; the lake was full of hungry bass.

ON THAT FIRST TRIP, MY PARTNER AND I CAUGHT AND RELEASED
AT LEAST 50 BASS, MOST BETWEEN 2 1⁄2 AND 5 POUNDS. OUR LARGEST, A SOLID 8 POUND FISH WAS CAUGHT ON MY ‘LAST CAST’ OF THE DAY.

On that first trip, my partner and I caught and released at least 50 bass, most between 2 1⁄2 and 5 pounds. Our largest, a solid 8 pound fish was caught on my ‘last cast’ of the day.

The name ‘Walk-in-Water’ comes from the Indian translation of the lakes name, Weohyakapka, a lake so shallow that at one time Indian tribes could actually walk across it. Prior to the rainy season, just launching your boat can be a challenge in the shallow, sandy bottomed lake.

The lake owes its crystal clear waters to the spring-fed, under-developed land surrounding the lake and to the bulrush and hydrilla encircling most of it. But today, it’s a much different lake than it was in the late 1990’s.

Most fishermen are aware of the benefits of hydrilla, a non-native, invasive plant that can grow as much as 3 inches in a day. When I first fished the lake, as much as 70% of the lakes surface was covered with hydrilla. Thick, dense mats covered the surface and often choked the outboard motors of anglers attempting to run through it.

Fishermen could virtually position themselves anywhere near the edges of the fast growing vegetation and find an abundance of eager largemouth bass willing to strike their lures.

One of my most memorable trips was with my brother-in-law, Dave Hykes. He and my sister Pat moved from Ohio to Avon Park and the first morning after they arrived, even before we un-loaded the truck with all their belongings, we made a trip to Lake Walk-in-Water for a day’s fishing.

We started the day drift-fishing for crappie, which in itself was a challenge, constantly dodging and re-positioning the boat to drift in-between the many hydrilla beds. We caught a number of good-sized crappies and around lunch- time, we decided to fish for bass.

On the North end of the lake, perhaps 200 yards off shore, the water was open and relatively shallow. Fishing with Zara Spooks, we immediately started catching bass in the open-water areas. In many cases, we’d have two or three strikes on the top-water lure before finally setting the hook on a nice two or three pound bass.

But the real excitement came when we moved into a couple of the reed islands. Casting our Zara Spooks up to the edge of the bulrushes, we found bigger bass hiding in the shadows.

Around 3pm, I casted my bone-colored Zara Spook into a small pocket near the edge of the bulrushes and before I could even begin the stop-and- go retrieve often referred to as ‘walking-the-dog’, a huge bass engulfed the lure and the battle was on. Working the fish into open water, I eventually worked her to the boat where Dave placed a net under her and brought her on-board.

WE ENDED THE DAY WITH A NICE MESS OF CRAPPIES FOR THE DINNER TABLE AND MORE BASS THAN WE COULD COUNT THAT WERE RELEASED BACK INTO THE WATER.

Topping 10 pounds, she was our biggest bass of the day, but not the last of the bigger bass we would tangle with. Just a few casts later, another big female nailed the Zara Spook, but this time, getting her to the boat was a real challenge. Immediately charging back into the bulrushes, we had to move the boat in and as I did, she charged out again into open water. Running under and then along-side the boat, all I could do was hold on. After what seemed like a long battle, she worked herself back to where the Mercury 225 was half out of the water and almost as if she had planned it, the line ran across the stainless steel prop and cut the line. She was a beauty, and likely even larger than the bass I had boated just moments earlier.

We ended the day with a nice mess of crappies for the dinner table and more bass than we could count that were released back into the water. Part of the reason we quit fishing was that we’d lost all of my Zara Spooks, either breaking off on a good fish or snagging up in the bulrushes. It was an incredible day of fishing.

But things changed in 2004 when Hurricane Charley and three other hurricanes decided to hit our area. Winds of over 100 mph swept across the lake, primarily from the north, driving the water and the floating hydrilla into the south shore. As unbelievable as it may sound, much of the hydrilla was actually ‘blown’ out of the lake in piles as high as 15’ on the south shores.

What was literally once a bass factory, quickly became just another good Florida bass fishing lake. The loss of the hydrilla was devastating for many fishermen.

I still fish Lake Walk-in-Water, but not as often as I used to. And the lake still has plenty of bass, many in the trophy class, but it’s not the lake that myself and many other fishermen remember.