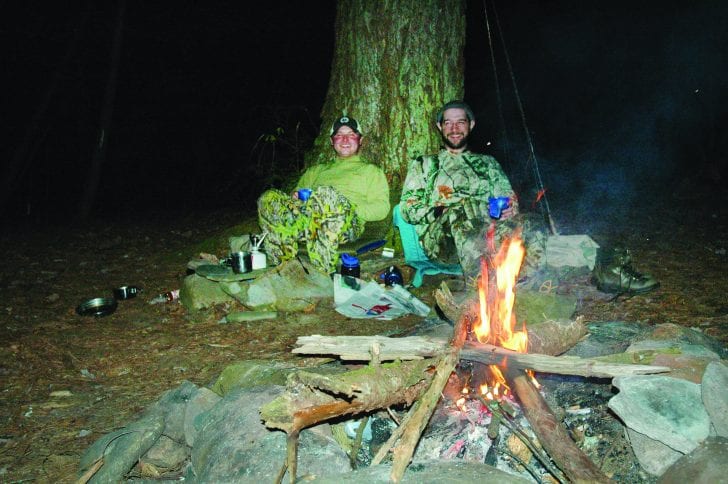 Camping to fish is fun. And when you’re trout fishing, spending the night allows access to portions of streams that would be difficult to fish or even completely inaccessible on a day trip. Sleeping, cooking and eating by the river also allows you get on the water earlier and fish later, which is often when the bite is best. But perhaps the most overlooked angling advantage to camping streamside is that you’re there. You’re either in the river fishing or you’re near the river relaxing or doing camp chores.

It might sound hokey, but this allows you to fall into the rhythms of the woods and the water and all the life surrounding them. Lest this be mistaken for sentimental hippie drivel, here it is put another way: By spending time around the river, one is able to constantly observe their surroundings. That bug that just dropped into your morning coffee might be an orange caddis, which is a mighty good hint at what the trout might be keyed on. When cloud cover begins to dissipate and the sun raises thousands of swirling midges into the air, it’s time to wrap up that lunch sandwich and pick up your rod.

On a backcountry trip several years ago, two buddies and I were kicked back around the campfire long after dark and running our whiskey-lubricated mouths when Jeff let out a startled yelp. A big black stonefly, maybe 2 inches long, with bright orange trim had pelted him in the side of the face. Over the next hour or so, these giant leggy critters descended upon us to the point that we had to seek out the shelter of our tents, but not before we dug through our fly boxes by headlamp to secure a handful of reasonable imitations.

Those big stoneflies were gone the next morning. We wouldn’t even have known they were there if we hadn’t been sitting up late around the fire. But guess what the trout were eating? They were eating big black stonefly nymphs, exclusively for all we could tell. We caught pretty wild rainbows and browns until our last nymph unraveled from overuse. After that the fun was over. We couldn’t get them to eat anything else.

On another occasion in a different place, I remember squatting by the creek using sand to scrub the dinner dishes. The sun had set behind the ridge and it was beginning to get a little gray out when I noticed big white mayflies with dark wings on and over the water. They were coffin flies. I was witnessing something I had never seen before, a spinner fall of eastern green drakes. I left those dishes right there on a rock and caught fish until it was too dark to see brown trout dimpling the surface as they fed. I’ve only experienced a hatch like that on a Southeastern river one other time, and I would have missed it if I hadn’t been washing dishes in the creek.

On second thought, “falling into the rhythm” is definitely too mushy to describe the situation. What’s really going on is opportunistic. By spending night and day by the river for several days, the odds are improved that you will be there when something really cool happens.

For GPS coordinates to access points and detailed maps of all North Carolina’s and Georgia’s best trout water, check out “Flyfishers Guide to North Carolina & Georgia.” It is available at fly shops, on Amazon, and signed copies are available from the author by emailing nsc8957@gmail.com.