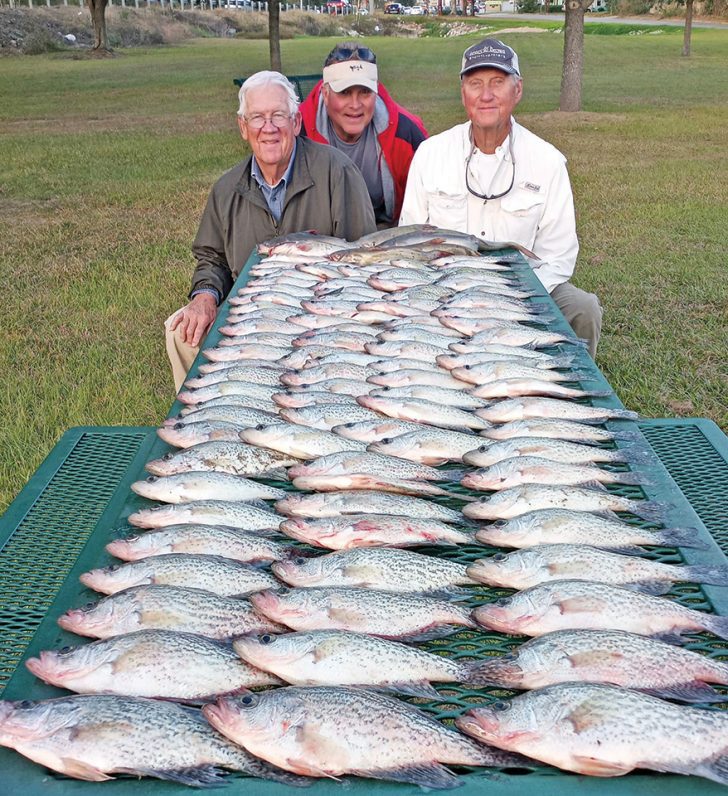 Take a look at what guide Tony Adams does during the winter on Alabama’s Lake Eufaula. With all the slab crappie he catches this time of year, it’s worth considering a fish fry for festivities.

Gone are the days when crappie fishing was a springtime-only endeavor. Anglers have figured out how to pattern these swimming fish sandwiches year-round, and Adams has them dialed in on Eufaula. It’s a pattern that probably translates well to many reservoirs across the South.

Lake Eufaula is an impoundment of the Chattahoochee River that stretches out to more than 45,000 acres on the southern end of the Alabama/Georgia border. Centered around the town Eufaula, Ala., hard winter is usually short-lived. Instead of being hunkered down in the depths this time of year, Eufaula crappie are still in a fall feed-up mode.

“Lake Eufaula doesn’t get as cold as a lot of lakes. They’re chasing shad in the mouths of the creeks or on the flats in 8 to 10 feet of water,” Adams said. “It’s one of the best times of year to catch bigger fish. They’ve pushed up out of the depths to feed and put on fat to take them through the winter into the spawn.”

Adams said loading a cooler with fillets can be pretty easy in these conditions. The fish might be as scattered as crappie get, but they are actively feeding. This makes catching them easy once you find them. Adams has a milk-run of brush piles in different locations and depths. His Humminbird electronics tell him quickly whether or not a location is holding fish.

Once fish are located, most of Adam’s clients prefer to fish old school. Jigs catch fish, he said, but most of his anglers prefer fishing minnows the way their grandfathers taught them.

Adams’ War Eagle boat is equipped with three Hi-Tek rod holders in front of each angler’s seat. His 10-foot B‘n’M rods are rigged with spinning reels and 6-pound high-visibility line. On the business end, he ties on a No. 2 hook for a lip-hooked minnow and pinches a split-shot about a foot up the line. He Spot-Locks the trolling motor over active brush and lets his anglers go to work tightlining. Sometimes, when it’s windy, he’ll add another split-shot to keep the lines from bowing.

“If you fish all three rods at different depths, you can figure out what depth they’re biting at,” Adams said. “Then you can leave all your baits at that depth.”

Anglers should watch rod tips, of course, but keeping an eye on that high-vis. line is also important. Sometimes fish swim up after eating, and you’ll only notice that by watching the line.

Give Adams a call if you’d rather be heating up oil than a grill on New Year’s Day.