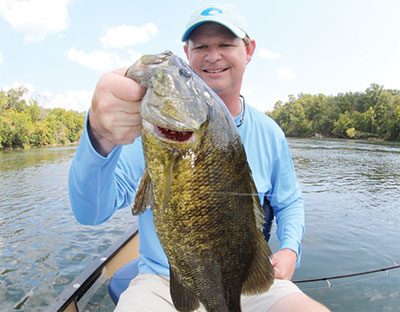 Good water levels have always been a huge factor in fishing success on the Broad River, so river fishermen here breathed a huge sigh of relief when Hurricane Ian pivoted east, leaving the SC midlands on the western edge of the destruction swath.

Flooding in the midlands is a sore subject, and not just because the river isn’t fishable. For years the Columbia area felt the effects of the October 2015 flood, a natural event that was deadly and far reaching. In the blink of an eye lives were lost, and thousands of people saw their properties devastated.

Old Man River always plays a role in flood events, and the Broad was no exception in 2015. In two days, the river went from carrying approximately 1000 cfs (cubic feet/second) towards Columbia to carrying over 73,000. Prior to the flood, levels on the Broad were perfect for fishing; flows below Parr Reservoir were below 1000 cfs. Then levels rose to 73,000. The Alston marker below Parr went from three feet to just over 23 feet in two days.

Some fear this kind of flooding is devastating to the fishery, but that’s not necessarily true, according to fisheries biologist Scott Lamprecht (ret.) When asked about the effects of flooding on our states’ rivers, Lamprecht said “there are plusses and minuses. Under certain circumstances flooding can help the fishery and under others it can hurt.” Lamprecht explained that, after a hurricane, flooding can leave a negative impact on the fisheries, but the impact is not always negative. “Flooding can introduce new food items to the fishery. It can open up a myriad of food resources,” he said.

On the negative side, Lamprecht feels that sometimes flood water can displace young fish, negatively effecting the year class. But he reinforced my belief that the healthy, established, adult classes survive just fine through flood events. Simply put, and contrary to what many think, the big fish don’t get washed away.

Lamprecht also brought up a positive note about the timing of the recent flooding. “Had this flooding occurred during the spawn the impact would have been highly detrimental,” he said.

Fast forward to February, 2020. As bad as 2015 was, levels in a February 2020 flood were even higher, with over 85,000 cfs running through the lower Broad. And just as Lamprectht taught us, the fishery was just fine.

Fast forward to November 2022. We’re in the middle of a wonderful fall, and water levels are at safe and fishable levels. We may have missed a few days after Ian, but fishing through October was fantastic. With water temps staying in the 60’s, top-water remains effective.

Buzz-baits are very productive in November, as are Poppers and Spooks. Spinner baits should also remain effective through Thanksgiving. Remember the fish are chasing shad, so keep your eyes peeled for signs of shad ruffling the surface. And remember the smallies in the river tend to school by size. Keep working an area if you connect with a good two or three pounder because there are likely more nearby.

Please keep safety at the center of your fishing. November can bring cold air temperatures, so dress accordingly, maybe even pull the waders out of the closet. Taking a change of clothing in your dry bag is never a bad idea in colder weather.

Tight lines everyone. Let’s hope the levels and weather co-operate to keep our 2022 season going well into December.