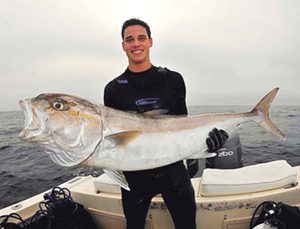 A Complete Guide of What You Need to Know

Greater amberjack season is opening again August 1st– October 31st in Gulf of Mexico state and federal waters here in Florida. I thought this would be the perfect opportunity to share some facts about this species, update anglers on the current Gulf of Mexico regulations and a short identification guide on how to distinguish greater amberjack from lesser amberjack, almaco jack and banded rudderfish. If angling and have and doubt on species identification, it’s always best practice to release the fish and let him see another day.

Jacks are prized sport fish, providing anglers with some legendary fights! After just a few of them, anglers are often ready to trade in the rod for a break and a beverage. They are voracious eaters and often targeted by recreational, commercial and charter fishermen as they readily accept lures or natural bait in a variety of fishing methods. Greater amberjack are heavily sought after for their sport quality by the recreational fishermen and fillets by the commercial fishermen which puts a lot of pressure on this species! Moreover, it is super important to be able to properly identify which jack is on your line before throwing it in the ice box.

Spaghetti? I didn’t order Italian?! Tapeworms belonging to the order trypanorhyncha otherwise known as spaghetti worms, can occasionally be found in the fillet of greater amberjack. Jack and other fish are the intermediate host for these cestode worms that undergo an interesting and complex life cycle. Spaghetti worms are harmless to humans and can be cut out of the flesh. Amberjack that have been bred and raised in captivity have shown reduced tapeworm infection rates as their diets consists of pellets, this gives seafood consumers a good excuse to support aquacultured jacks! There are some fish parasites that can be transmitted to people so cooking fish thoroughly or freezing to FDA recommendations when eating fish raw should be taken seriously.  Amberjack have a firmer/steak like flesh that can deliciously be prepared, grilled, blackened or smoked. For an overview on how to smoke fresh fish check out our blog here and video. 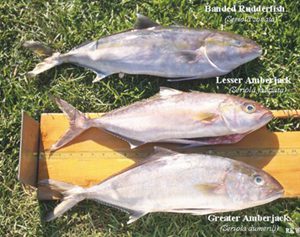 The genus Seriola contains nine species, four of which are frequently encountered in the Gulf of Mexico. These schooling jacks inhabit offshore reefs and wrecks where they cruise the water column and search for fish and invertebrates. The largest of the four species is the greater amberjack, followed by the almaco jack; the lesser amberjack and banded rudderfish are significantly smaller species and can be similar in size. In Florida, a typical cookie cutter greater amberjack will be in the 20-40 pounds, almaco jack between 2-20 pounds and lesser/banded jacks weighing in below 10 pounds. Size is one criteria to take into account when identifying these species as it would be very unlikely to encounter a 50 pound banded rudderfish or lesser amberjack, slightly unlikely to be an almaco jack and very likely to be a greater amberjack. The size of these fish can vary greatly throughout the world and along Florida’s 1300 miles of coastline. In Southwest Florida there may be some seasonal size variability with larger jacks moving closer to shore during the winter.

Juvenile versions of these jacks can look different than their adult counterparts and undergo physiological changes as they grow. These changes can primarily be observed in juvenile coloration and pattern. As juveniles, these jacks are lighter in color with vertical bars along the length of the body. The number of gill rakers found on the fish’s gill arch are reduced as these jacks increase in size. Luckily slot and minimum size limits are regulated on all but one of these four species and helps in the prevention of misidentifying undersized jacks. Using color for species identification gives you a guess but also can be unreliable as color can vary within the species based on genetics, size/age as well as fish activity. One feature that may be more pronounced when the fish is active and “lit up” is the darker colored eye stripe called the nuchal bar. In greater amberjack the nuchal bar starts from the nose and extends into the first dorsal fin area, in lesser amberjack the bar starts from the eye and extends to in front of the first dorsal fin. Banded rudderfish can be more blue-ish in hue as adults and have white tips on their tails. Almaco jack are usually darker in coloration than the other species which is more noticeable when observing the upper portion of the body.

Body shape, fin size/position, jaw maxilla, dorsal spines, keels, gill rakers and more! Details on all these features and identification factors can be found on my blog, https://blogs.ifas.ufl.edu/collierco/2020/04/29/amberjacks-a-complete-guide-of-what-you-need-to-know-before-the-season-opens/