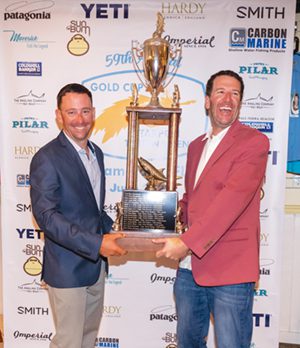 The 59th Annual Gold Cup Invitational Tarpon Fly Fishing Tournament, one of the most revered fly-fishing tournaments in the world, is known wherever anglers pursue the silver king with a fly. It consists of five days of honorable competition out of Islamorada, Florida Keys. This year’s tournament, from June 20-24, was especially exciting as fishing far exceeded previous year’s numbers and provided some real suspense each day.

Anglers battled in a total of 103 fish during the five-day stretch, with 70 release and 33 weight fish caught. Points are earned for release fish as well as for larger weight fish, which are assigned and estimated weight based on length and girth measurements before being released.

It was some of the best tarpon fishing the tournament has witnessed in some time. Teams of anglers and guides compete for trophies and sponsor-donated items. The real honor is for the overall winning team to have their names added to the 59-year-old perpetual trophy. The historic GCTT trophy is showcased locally at The Florida Keys Outfitters.

“It’s humbling to even be invited to fish the Gold Cup, and Capt. Luis and I consider it a great honor just to be in the room, trying to follow in the footsteps of giants,” Preston said. “To come out on top in 2021 was the experience of a lifetime, and to be able to repeat and carry this feeling on for the next 365 days is everything we could dream of and then some. We’re extremely grateful to our fellow competitors, the tournament organizers, and the anglers and guides who have come before us to make the event what it is today.”

First Runner Up Angler, Mike Criscola, from Fair Haven, NJ, and Guide, Capt. Eric Herstedt, earned 5,295 points. They caught the limit of five weight fish by day four, forcing them to spend last day of fishing chasing release fish at least 4 feet long, instead of chasing the biggest fish. They also caught fish every day, which is an oddity during the Gold Cup Tarpon Tournament.

The Largest Tarpon Award was earned by angler Ned Johnson, from Charleston, S.C., and his Guide, Capt. Craig Brewer with a fish weighing approximately 139 pounds.