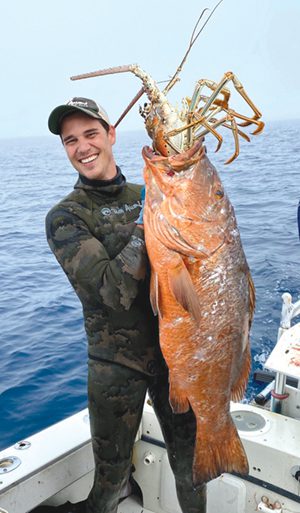 The cubera is the largest of the Western Atlantic snapper species, these fish can reach lengths of over 5 feet and weigh over 120 pounds! Its enormous adult size makes this species highly prized by game fishermen and commercial fisheries throughout the Caribbean and South Atlantic. The scientific species name cyanopterus was inspired by the Greek cyano- meaning blue and -pterus meaning wing which correlates to the blue-ish pigment that can be present on the membranes of the cubera’s fins which is something to keep in mind for positive identification!

This species at a smaller size can be easily misidentified with its cousin the gray aka mangrove snapper (Lutjanus griseus). A surefire way to identify cubera snapper is to check the roof their mouths! A few species of snapper have distinct vomerine tooth patch shapes, a small area of sandpaper-like teeth located on the top palate of the fish. Gray snapper have a distinctive arrow shaped patch with a long tail while the cubera have a triangular shaped patch with no tail portion. This method of ID may be difficult to conduct with live fish as they may be snapping their teeth so it’s great to familiarize yourself with some other identifying characteristics although less definitive. The gray snapper’s teeth are smaller but also closer together than the cubera’s larger spaced-out canines. The cubera have more robust features in comparison to gray snapper when observing their darker pigmented heavy-duty fins and the lip bone aka maxilla which is wider/thicker. Because these snappers are similar in appearance as juveniles, many regulatory bodies set the minimum size limit the same for both the gray and cubera; however, in Florida cubera do have a max boat limit of 2 fish over 30 inches which gray snapper do not.

The cubera snapper can be spotted from from Massachusetts to Brazil in depths from 2-200 feet with higher occurrences of inshore sightings taking place in more tropical regions. Juvenile cubera have an association with softer bottom estuarine habitats such as sea grass beds and mangrove roots but as they grow, they tend to migrate to their adult rocky reefs, ledges and wrecks. A favorite bait among anglers when targeting big fish on deeper structures are large crustaceans which the cubera can make quick work of with its powerful jaws! 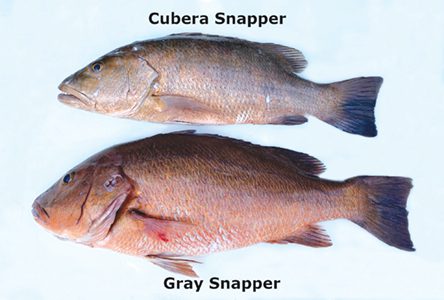 Cubera are a long-lived species with one 2017 paper aging a fish to 55 years old! This makes the cubera the second longest lived snapper in its range with first place awarded to the red snapper which have been aged to 57 years old in the Gulf of Mexico. The time of year spawning occurs in this species can vary across cubera’s range but generally these snapper reproduce during the late spring to late summer with peak activity in Florida occurring in June and July. Cubera can become reproductive at 4-5 years old which correlates to 21.5 inches in total length. This species has been observed to grow rapidly for the first 12 years of their lives. In one study of 106 cubera, the average size for a 5-year-old fish was 27.7 inches; however, snapper over 39 inches varied from 11 to 55 years old. This variability with size and age is common in longer lived large reef fish.