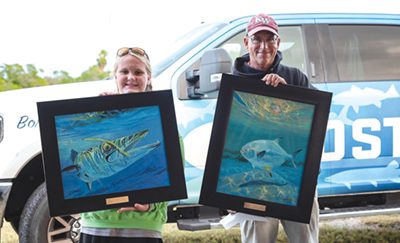 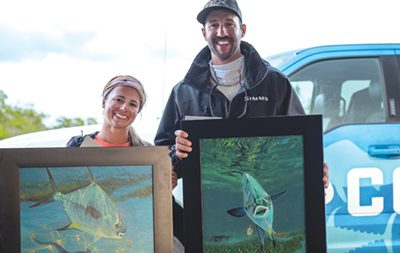 After racking up 2,250 points for their releases, the father and daughter from Cudjoe Key, Florida, were named the grand champion team in both the tournament’s spin division and youth division. The veteran duo earned the same two titles in the previous Sugarloaf Showdown.

In the fly division, guide Nick LaBadie and angler Jessyca Garlock, both of Key West, Florida, released three barracuda and a bonefish to earn 400 points and the divisional championship.

Fly division runner-up was the team of guide Chris Wilson of Big Pine Key, Florida, and angler Chris Flemming, who earned 100 points for releasing a bonefish.

In the youth division, runner-up honors went to guide Will Benson and his anglers, Luke and Alice Benson, all of Sugarloaf Key. The trio ended the tournament with 700 points for releasing two permit.

Second runner-up awards went to guide Shawn Gable of Big Coppitt Key, Florida, and anglers Don Gable and Chad Lee in the spin division, who earned 950 points; guide Nicholas Calabro of Key West and angler Rob Kaufman of Palm Springs, California, in the fly division with 100 points; and guide Andrew Tipler and angler Annabel Tipler, both of Cudjoe Key, in the youth division with 200 points.

The challenge drew 49 participants on 22 boats. It was presented by the Lower Keys Guides Association to raise money for the association’s initiatives and the Florida Keys Guides Trust Foundation, which provides funds to assist fishing guides who are recovering from an illness or injury.