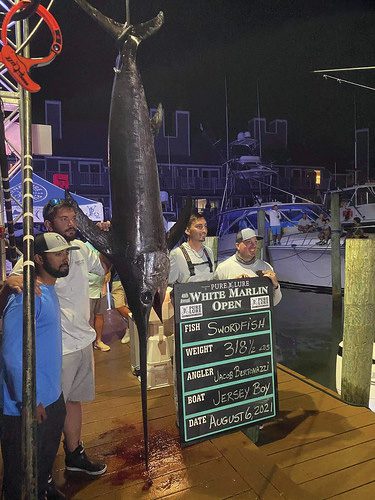 The “fish of a lifetime” for one angler turned out to be the fish of the month for Maryland, as two state-record swordfish were caught during a two-week period this summer.

On July 23, Annapolis resident Peter Shultz, 36, became Maryland’s first state record holder for Atlantic division swordfish when he caught a 301-pounder while fishing the Huk Big Fish Classic out of Ocean City. Shultz caught his big-money fish about 50 miles offshore at Washington Canyon. It picked up a dead eel on a circle hook fished on a Talica 50 reel and 65-pound braid with 25 feet of 150-pound leader. Landing the fish was an epic eight-hour team effort, which helped propel team Real One to $542,648 in winnings.

But Shultz didn’t get to enjoy being a record holder for long. On Aug. 6, New Jersey angler Jake Bertonazzi set the bar a little higher when he caught a 318.5-pound swordfish while fishing the White Marlin Open out of Ocean City. Bertonazzi and team were deep-dropping squid on a circle hook about 60 miles offshore in Poor Man’s Canyon. They hadn’t caught much all week when the big broadbill picked up their bait just minutes before the end of the tournament. It took two hours to land the fish, which earned the crew of Jersey Boy $118,000 in tournament winnings.