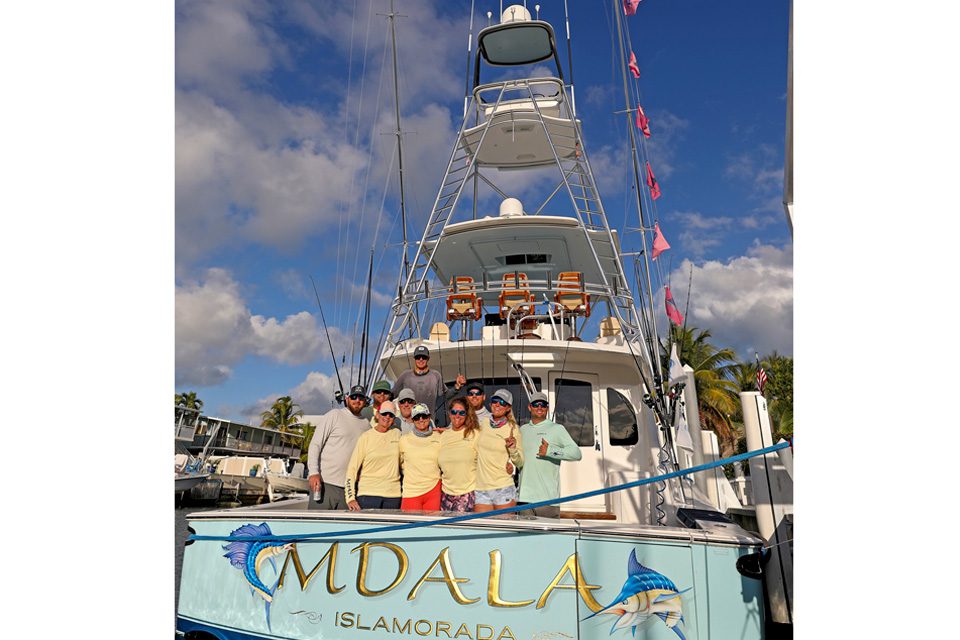 The 58th Annual Islamorada Sailfish Tournament kicked off at Whale Harbor hosting 80 anglers along with family and friends with a grand buffet including stone crabs.   The sailfish action started on Friday morning and continued over the next two days concluding on December 5th.  Captain John Hagen aboard the Mdala led anglers Steve and Sue Pfeiffer from Cedarburg, WI, along with Brittany Rhonehouse from Destin FL, Brett Angelillo from Key Largo, FL,  Stephanie Harper of Islamorada, FL, Tyler Valles and Alison Raines both from Tavernier, FL to the winners circle with 10 releases.  The team took home beautiful leaping sailfish trophies from King Sailfish sponsored by Caribee Boat Sales and Yamaha Outboards.

The fleet was greeted by great weather over the course of the three day tournament.  Tackle Center called in the first hook up at 8:49, but Que Mas’ angler Mark Whitley would hook up and release the first fish of the tournament. The day would ultimately belong to the Mdala with a total of 7 released sails. Day two was overcast with easterly winds and the sailfish bite was slow.   Relentless would pick away at the sails all day, releasing 3 by day’s end.  Others found some sails including the Mdala who released one fish on the second day bringing their total to 8 releases.

Day three started off quickly with a triple header called in by JC Cleare, captain of the Remix.  Anglers Jorge Corzo from Miami, FL would release the first fish.  Doug Mientkiewick from Islamorada, FL released the second and Bill Danko from Maineville, OH sealed the deal with the release of the third fish propelling the team into third place with 5 releases.  Que Mas captain Robert Helms would call in a triple header at 10:56.  The team released all three of the sailfish.   Anglers Wally Whitley, Matt Mclean, Brad Goodrich and Trevor Newman all from Islamorada, FL  fishing with Mark Whitley from Tallahassee, FL and Mike McCorkle of Marathon, FL released a total of 6 fish over the three days landing them in second place.  The team received beautiful Tackle Center of Islamorada sponsored King Sailfish trophies and a check for $36,450.00.  Nick Carullo from Miami, FL aboard the Remix released a sail at 1:32 giving the team six fish putting them in third place on time. The team was rewarded with King Sailfish trophies and a check for $17,820.00.  Mdala would continue to stay in front of the pack releasing two fish on the final day to take the top honors.

Contagious’ angler Mark Mitchell from Charlotte, NC would release 4 sailfish over the three days taking home the Bill Hirni Memorial trophy and an amazing King sailfish trophy sponsored by Tackle Center of Islamorada.  Brittany Rhonehouse fishing aboard the Mdala would release 3 sailfish winning the Top Lady Angler award.  The Mdala team would also tag 5 of their 10 sailfish to win the most tagged fish award.  First Place Junior Angler award went to Zach Sullivan from Naples, FL with 2 releases on the Smile Maker.  Blake Johnston from Largo, FL fishing aboard the Valor would release one sailfish for second place in the junior division.

In true Islamorada style, the sailfish weren’t the only fish biting on this beautiful weekend.  The Largest Tuna was caught by Ryan Cano from Islamorada, FL aboard the Skip Jac weighing in at 14.6 pounds. Travis Bennett from Tavernier, FL weighed in the largest Dolphin an11.4 pounder caught aboard the Contagious.  Chris Herms from Jacksonville, FL caught the largest Mackerel an 18.8 pound Kingfish aboard the Back in Business.  Most Outstanding catch went to Colby Mason from Islamorada, Fl with a 3.6 pound Mutton Snapper caught aboard the Kalex.

Over the three days 61 sailfish were released with 81 called in hook ups. The Islamorada Sailfish Tournament is the first leg of the Florida Keys Gold Cup Sailfish Championship.  The Mdala is currently in the lead of the series with 10 fish.  Second place in the Gold Cup is the Que Mas with 6 releases on time, third is the Remix also with 6.  The next leg of the series is the Cheeca Lodge and Spa Presidential Sailfish Tournament on January 22nd and 23rd. The champions of the Gold Cup will be crowned at the conclusion of the Islamorada Fishing Club’s Captains Cup Sailfish Tournament on January 27th 2022.

More information on the Islamorada Sailfish Tournament can be found on the web site www.islamoradasailfishtournament.com