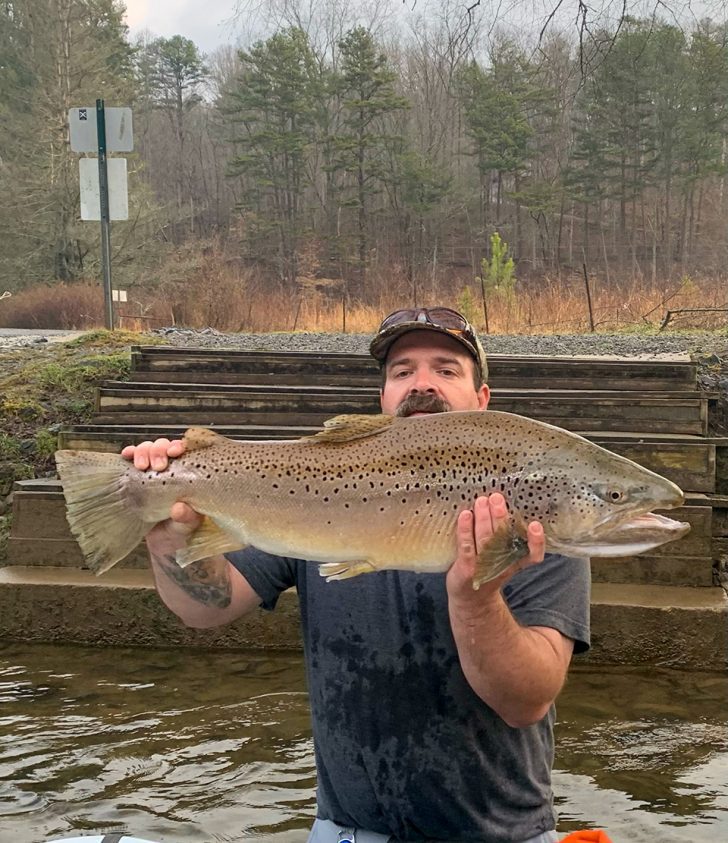 The fish was a long time coming for DiPietro. He has guided or fished this Blue Ridge, Ga. tailrace pretty much daily for more than two decades. He’s seen and caught some monsters, but nothing close to the beast that picked up one of his own Pat’s Rubber Leg’s variations during a guides’ day off with long-time fishing buddy Colby White.

“I got lucky. I think it was just my time to get lucky,” DiPietro said. “It really is amazing that we landed him. If Colby hadn’t been there, there’s no way it would have happened.”

The fish was not a stranger. DiPietro said he thinks he’s seen it before hanging around the boat ramp at Curtis Switch. Staff with Georgia’s Wildlife Resources Division also reported a huge brown trout in the area that feasts on catchable-sized trout as they are stocked in the river.

DiPietro, however, was not specifically targeting the fish. If he had been, he would have geared up. He was fishing a 10-foot, 5-weight Moonshine Drifter rod rigged with a two-nymph rig. The size 6 stonefly anchoring his rig was secured with 2-pound-test tippet.

The fish ate on the third cast of the day just a few yards from the put in. After the first couple runs, DiPietro knew light line was going to be a big issue. White pulled anchor on the driftboat and rowed like a madman to keep up with the fish, which carried them several holes upstream.

“When we first saw it, it was just unbelievable,” DiPietro said. “It’s the biggest trout I’ve ever seen in my life. Colby fell in trying to net him. I just threw Colby the net and told him to go get that fish. He lost a shoe, flooded his waders and went up to his neck in 42-degree water. I mean… the line was wrapped around his head. It really is amazing the tippet held.”