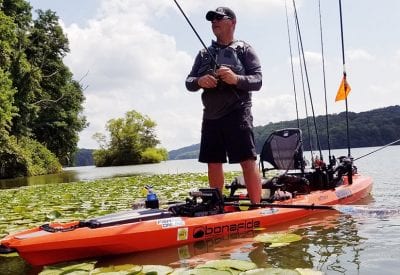 With all the cold weather we are having, I have not had much time (nor desire!) to wet a line. Alternatively, I have spent more time out doing my homework for the upcoming season. I went to the Richmond 2018 fishing expo; what a show! I turned into a little kid. It was like a grownup’s Chuck E Cheese. All kinds of toys, apparel, new rods and lures. I watched a few fishing seminars from a few of the top pro fishing stars on tv but my main focus was to check out what’s new in the kayak industry. At the Appomattox Paddle booth, I saw lot of familiar faces. Rob Choi gave me a good lesson on Flathead catfishing and where I should go to target them. This is a bucket list fish I want to go after this spring, so I’ll write about where to go and what to use in my next columns.

“The Famous” Kayak Kevin Whitley told me a bit about his 2017 Ocean Kayak Trident fishing tour in Florida. One big attraction was the kayak that everyone has been talking about, and just released to the public, the Bonafide SS127–with a hull weight of only 69lbs and made right here in the USA. I talked to Bonafide founder Luther Cifers a few weeks later at the Paddle VA store in Hampton. He explained to me how they had listened to kayak fisherman and had over a dozen configurations before finally getting it just right. Luther is no stranger to the kayak world introducing the famous Yak Attack Brand of kayak accessories that started in his Burkeville Virginia basement in 2009. He has also released a few new rail mounted rod holders. I can’t wait  to replace the older ball mounted style with these new revolutionized style. The Bonafide Kayaks have a great price point, the SS127 will price at $1599 and the smaller SS107 will be right at $1299 and will be released around the April timeframe. Be sure to watch out for this new gear as you shed the cold and warm up for Spring!