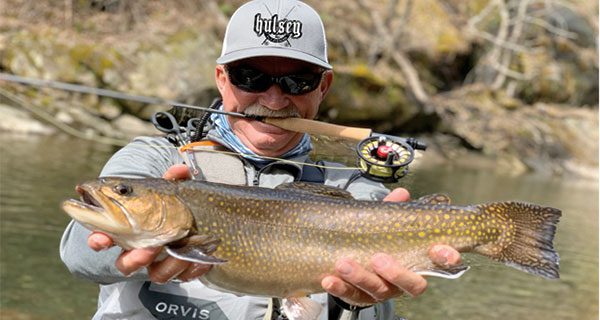 November is one of our favorite times to be on the trout streams of North Georgia and Western North Carolina. By mid-month, most of the fallen leaves have settled to the bottom of the river, no longer being hooked by every cast to spoil your drift. Fairly stable weather with nice days and chilly nights keep the trout active pretty much all day long. The delayed harvest streams are in full swing with great numbers of fish being stocked and no longer being plucked out the same day, letting everyone have a shot at catching a fish or two. My favorite part is the lack of snakes and yellow jackets, which lets my mind be free of that little detail. Brown and Brook trout usually spawn this month, so be alert where you put your feet and try to avoid stepping on a redd.

Fragility is the name of the game for our southern trout populations. It’s tough just to get them through our steamy hot summers, much less being careful enough not to stick a boot in a smattering of eggs. Traffic from folks fun-floating the rivers are gone and only guide boats and hardcore fisher folks are usually out and about. This usually means nice experiences with people all day. Great streams to fish include the Toccoa River near Blue Ridge, Georgia, Fires Creek near Hayesville, North Carolina, and Big Snowbird near Robbinsville, North Carolina. All three are delayed harvest streams and fish abound in November on these waters, providing a great place to get someone hooked on fly fishing or spend a sunny day wrestling with a bunch of fish. Fly patterns need not be complicated. Traditional nymphs, such as a Pheasant Tail, Hare’s Ear, and Prince nymphs will provide enough action to keep you amused from daylight until dark. Olive, Brown and Black Wooly Buggers normally will cover any streamer eaters out there. Dries, such as Blue Winged Olives, Parachute Adams and maybe a Griffiths Gnat pretty much cover the rare fish that’s looking up at this time of year.

Winter is just around the corner so it’s a great time to book your cold weather outings with us. Pressure on the fish will be at its lowest and they aren’t as picky as they are during the warm parts of the year. Hope to see you on the river!

Give David Hulsey a call at (770) 639-4001 to book a class or a guided trout trip. Visit his website at www.hulseyflyfishing.com.