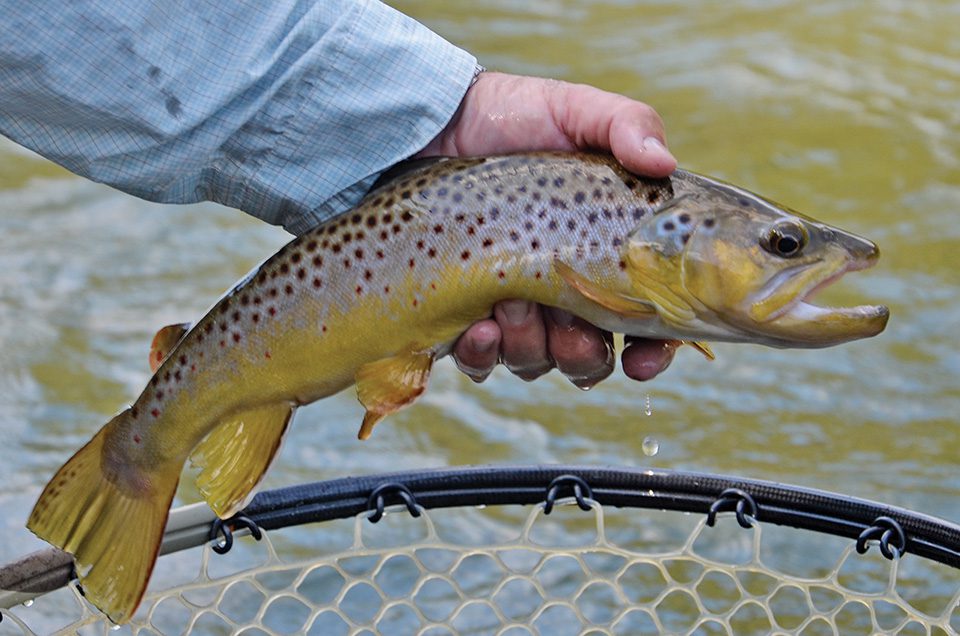 Drifting between forested banks over bedrock shoals, it’s easy to forget where you are on the Buford Dam tailrace of the Chattahoochee River. This beautiful stretch of water snakes southwest through densely populated suburbs north of Atlanta, yet riverside development is limited. There are long stretches where this river feels like wilderness—where the sounds of the city are replaced by lapping oars and the soft swish of fly rods cutting air.

Chris Scalley, owner of River Through Atlanta guide service, manned the oars. He rowed and coached and again showed us the bounty of the “Hooch.” The Angler Magazine Atlanta co-publisher Bob Rice and I have fished with Scalley several times before. Our late-September trip was another good one. The river’s wild reproducing brown trout were active in cooling weather patterns, and they punctuated a steady catch of sleek and feisty rainbows.

The Chattahoochee is one of the best tailwater trout fisheries in the Southeast. It is a success story for fisheries management. Georgia DNR stopped stocking brown trout in the river in 2005 after natural reproduction was discovered. Today, those beautiful butter-bellies still thrive.

It’s a unique situation that has made this 30-mile-long stretch a destination fishery. The Hooch has produced a string of state-record browns, including the current nearly 21-pounder.

But before you get geared up for 30-inch trout, realize that while monsters do exist in the river’s deep holes and log jams, they are not frequent catches. Over several trips with Scalley, it seems a pretty good day consists of numerous rainbows, a handful of browns in the 10- to 12-inch range and a fish or two in the 14- to 16-inch range. Of course, the opportunity for larger fish is always present. Early in our float, a wading angler hailed us over to show photos of a 20-plus-inch fish he had in his net earlier that day.

It was proof the big girls were eating, and it inspired us to fish our triple-nymph rigs more diligently. After bringing several 8- to 12-inch rainbow trout to hand, I hooked into our first brown, a gorgeous 15-incher that took the big black stonefly anchoring the rig. We went on to catch several more good browns and a bunch of rainbows. The bows preferred either the small Baetis nymph in the rig or an egg pattern Scalley called a Stormy Daniels.

While fishing three nymphs at once might sound like a recipe for disaster, it’s actually quite simple. Under Scalley’s coaching, even beginners catch on to the looping lob it takes to cast such a rig. Once it’s in the water, nymphing with an indicator is a lot like the bobber fishing you did as a kid. You just float down the river and watch for a fish to bite.

Those bites should be frequent over the next few months. Water temperatures remain consistent on the tailwater year-round, and fall and winter offer great fishing for wild browns.