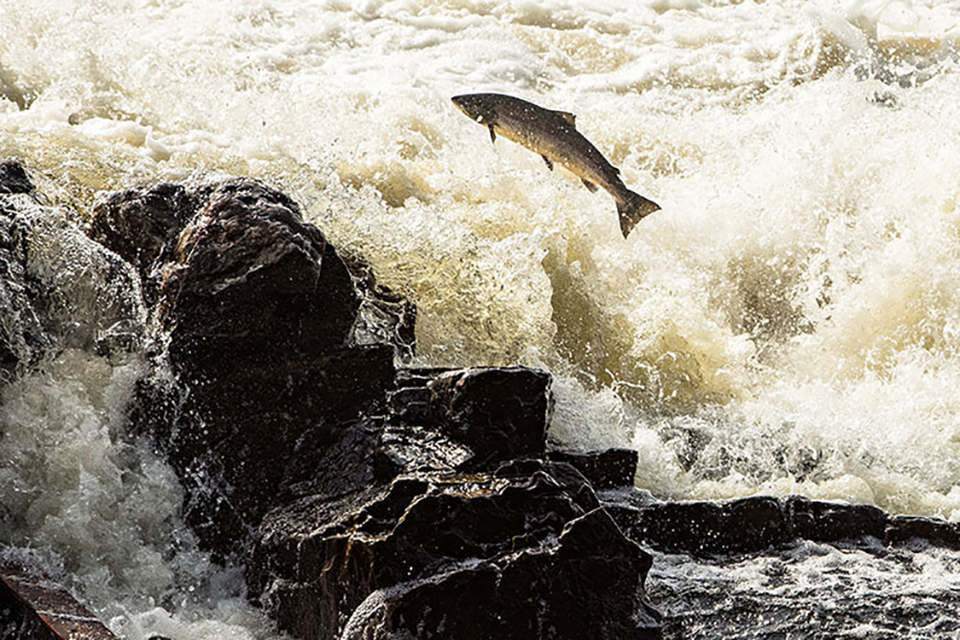 After dam removals and fish passage improvements, endangered Atlantic salmon are returning to the Penobscot River in encouraging numbers.

2019’s International Year of the Salmon proved to be a good year for biologists counting adult Atlantic salmon returns in Maine’s Penobscot River. After a one-day count of 107 salmon at the Milford Dam fish lift set a record on June 20, numbers have continued to rise. The latest count is more than 1,100—the highest since almost 3,000 returns were counted in 2011.

The Penobscot River hosts the largest run of Atlantic salmon left in the United States. Atlantic salmon used to return by the hundreds of thousands to most major rivers along the northeastern United States, down into Connecticut. Salmon were big business—both commercial and recreational fishermen sought these prized fish. They in turn supported the local bait shops, gear stores, and more. Tribes relied on watersheds and their natural abundance of sea-run fish, including Atlantic salmon, for physical and spiritual sustenance. The Penobscot River once saw 75,000 to 100,000 Atlantic salmon per year return to spawn.

Dam-building in the United States in the 1800s to mid-1900s contributed to an almost complete elimination of many sea-run, migratory fish species in the Penobscot River. Dams blocked access to crucial spawning habitats. Pollution and overfishing also played a role. More than just the sea-run fish were affected by the dams. Tribal subsistence fishing, historically large commercial and recreational fisheries for salmon, and commercially-important species like cod that preyed on once-abundant river herring, were all hit hard.

A New Plan for Bringing Back Salmon

Since Atlantic salmon were declared endangered in 2000, NOAA Fisheries and U.S. Fish and Wildlife Service have been collaborating to help this iconic species recover.

Of this year’s returns, approximately 500 have been taken to the Craig Brook Hatchery, where U.S. Fish and Wildlife Service biologists will use them as broodstock. The rest have been released upstream to spawn in the wild. At the hatchery, they raise the eggs and release them as smolts (2-3-year-olds) or fry (a few months old), to help repopulate Maine’s rivers. The hatchery also functions as a living gene bank by conserving the remnants of genetic diversity in the population. Relying on hatchery-raised fish is one element of the new Atlantic Salmon Recovery Plan released by the agency earlier this year.

Another element of recovery is to focus on improving migration and water quality in rivers and estuaries. Improving survival through dams, increasing access to diverse habitats and improving habitat quality will help Atlantic salmon overcome challenges they face in both rr and marine environments.

We have been working with state agencies, hydropower dam owners, the Penobscot Indian Nation, and many conservation groups. We have developed an ambitious plan to undo two centuries of damage to habitat for sea-run fish. Since 2010, we have removed 15 dams in the Penobscot River watershed, including two large dams on the Penobscot River. Fish passage improvements have been made at another 13 dams. This has improved access to more than 2,000 miles of river and stream habitat for Atlantic salmon and other sea-run fish.

If all goes well, we estimate it will take about 75 years to return the population to levels that will allow them to be removed from the Endangered Species List. This is roughly 15 generations of fish.

Unlike their Pacific counterparts, Atlantic salmon can return to spawn in rivers several times during their lives. Each female lays about 7,500 eggs, of which only 15 to 35 percent will survive their first year. After that, the fish face many threats including dams, pollution, predators, fishing nets, and disease. Dams are not just a problem for salmon swimming upstream. Smolts can also experience injury, increased predation, migration delay and death as they migrate downstream.

We have a long way to go before Atlantic salmon populations are restored to their former glory and place in our ecosystem. This increase in adult returns, and the presence of spawning adult salmon in the Penobscot River, provides renewed optimism for our ongoing efforts to recover Atlantic salmon.