We have some fantastic Marlin fishing opportunities out of Quepos over the coming months. Blue marlin are the most common at this time of year and most fish are in the 150-300lb range with there always being the opportunity for a big marlin, with 500lb plus fish not uncommon.  You can target marlin during a day trip out of Quepos or on a multi-day trip to our FADs/Seamounts around 100 miles offshore, widely known as the best blue marlin fishery on the planet.

May produced a good sailfish bite with some boats experiencing double digit release days. Anglers should stand a good chance of some sailfish action through June and July where we typically see sailfish on most offshore trips. Good sized yellowfin tuna can be caught using live baits or various forms of jigs and dorado have been present every month this year. With cooler water temperatures in the coming months this should continue. It is a great time to target wahoo over our offshore reefs and an early morning departure can prove successful for wahoo . . . the early bird catches the worm! 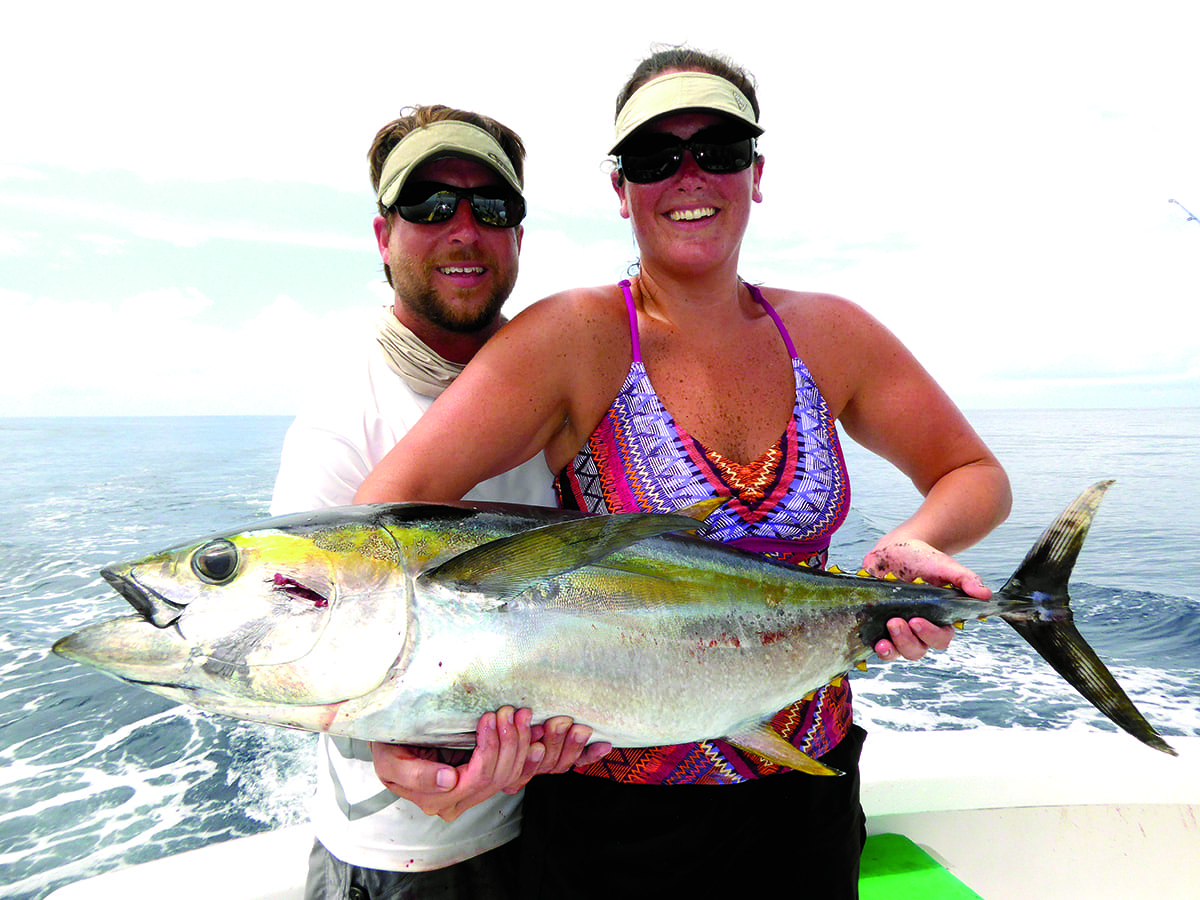 Inshore, there are some big roosterfish to be caught at this time of year. We have released roosterfish estimated at 80lbs & 100lbs aboard my boat Good Day this year, and in June 2017 we released a rooster estimated at 90lbs. To put that into perspective, the 58-year-old world record is 114lb so anglers do stand a real chance of catching a fish to challenge that when inshore fishing out of Quepos.

Our afternoon rains are pushing more freshwater out of the rivermouths, creating some very fishy looking color changes where the fresh and saltwaters meet.

We find some nice fishing along the color changes with snook, snapper, jacks, mackerel, tripletail and more caught here just outside of our rivermouths.  The 59lb 12oz world record snook was caught out of Quepos and every year during these months the Parrita, Savegre, Baru and Naranjo rivermouths produce some really big snook.

Check out the charter directory for details of some of the great boats and captains here at the Marina Pez Vela, Quepos. We have boats in the fleet to suit every taste and budget from pangas/center consoles for inshore snook and roosterfish trips, to large sportfishers for multi-day offshore FAD trips.

I hope to see you on the water!

Benn Gilmour runs Jackpot Sport Fishing out of the beautiful Marina Pez Vela in Quepos. His boat Good Day is a Costa Rican custom built 31-foot Sport Fisher.  Jackpot Sport Fishing specializes in offshore, inshore & fly fishing. They cater to serious anglers who come to fish with them for a week, as well as families and honeymooners looking for a day on the water during their vacation in Quepos/Manuel Antonio. Benn says hello to you if you are down at the Marina Pez Vela. Look for the British guy! Contact Benn at info@jackpotsportfishing.com or visit www.jackpotsportfishing.com