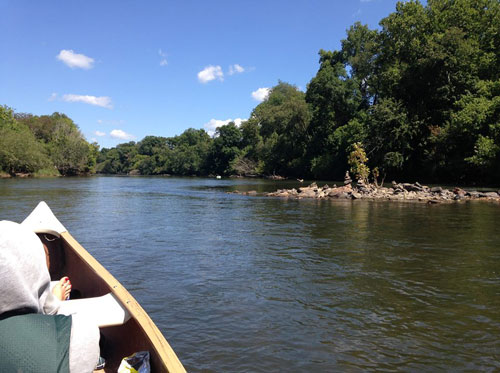 There are two things that frustrate me in life more than anything else. Someone fibbing to my face, when I know the truth, and not catching fish that I know are swimming right in front of me. Let’s cover the latter today.

The ever elusive, mysterious and frightening Muskie lurks in the waters of the French Broad River. Perhaps the best thing about this fact is that so few people know it. Even if they’ve heard of Muskie before, the general public would be horrified to see one up close, in the waters where they so enjoy their summer recreation. But for those of us who do know of this razor-toothed giant, it is the holy grail of fish to catch in Western North Carolina. A grail that I, despite my many attempts, have yet to grasp. That doesn’t mean I haven’t had my own encounters with this violent ghost, though.

There are varying opinions about where the best Muskie hunting is on the French Broad River but the most common stretch that I have always heard stories about is the stretch of river between the Horseshoe Public Boating Access on Hwy 64 (on the east edge of Etowah) and the Westfeldt River Park (just behind the Asheville Regional Airport). I’ve navigated those slow, dark, log jammed waters many times in my trusty Old Town.

However, my column today isn’t about how to approach catching one of these monsters; the NC record Muskie weighed in at over 41 pounds, by the way. It’s to share with you my failed attempts, accidental brush ups, funny stories I have been told by others, and what I learned from all of it.

I was floating through what looked like a scene out of Lord of the Rings. Mist was crawling across the murky water. The banks were steep and lined with eerie branches reaching like boney claws down into the water in every direction. The river itself had a strong intention to its flow. Fishing from a canoe, for Muskie, in these conditions was probably not the smartest thing to be doing but I was determined that today would be my day to meet this beast face to face.

As I approached a logjam on my right, wedged between the shore and a large boulder, I noticed a wash out behind it, with suds circling about. I just knew this was the spot. As my 7” floating minnow landed in the suds, there was a massive explosion of water and foam. Adrenalin pumping, I eagerly went to set my hook. My bail had not even closed yet. But in the millisecond that it took to pull back, it was too late. The Muskie severed right through my leader. You see, I figured that a braided steel leader would have been seen, so I tied a 20 lb mono as my leader. I should have been better prepared for the opportunity of the strike. To this day, that is the only strike I have ever had from a Muskie.

I was floating the stretch between Bent Creek and French Broad River Park in downtown Asheville. I had my Cousin Suzie with me. It was a hot summer day, not a cloud in the sky. We came upon a part of the river where there is a sand dredging operation. There are also some cool little rock stack features that people have built up over the years on a couple little wash islands nearby. Now, even though I knew this deep pool held some big fish I decided to lie back and just quietly float on through. My cousin was employing the Cleopatra approach, lying down in the floor of the boat. I laid my poles to each side and relaxed. I never took a single cast.

Not a quarter of the way into the deepest, darkest part of the dredging pool, an enormous thrash rang out as a “thump” smacked the bow of the canoe. I sprung up not knowing what happened. The strength from the push in the water actually moved the bow of my canoe to the side. As I looked at the torpedo like plow of the water racing to my left I could make out the body of a huge Muskie. He was darting away. We had floated right up on his back. He was sitting right where I would have thrown my top water bait. I had let my guard down. Years spent chasing these fish, to no avail, and I just ran one over with my canoe.

This story is not my own, but was relayed to me by a gentleman I met fishing out near Ledges Park, on the French Broad River, north of Asheville. He told me about how he was wade-fishing near where the Johnson River comes into the French Broad one day, enjoying the peace and beauty of the spot. He said he had gotten a couple of Smallmouth Bass, the dominant species in that stretch of the river, when all of a sudden, he looked down beneath him to see about a 3 foot Muskie swim right by his feet in the water. He said it just about made him jump right up out of his waders and “make like Jesus” across the top of the water back to shore. He said that, up until that moment, he had only heard stories about the fish. Since then, he always keeps his eye on where he’s at, in the river, and everything that moves around him.

All three of these stories have parallels to our daily lives. How many opportunities have we missed because we weren’t ready when the chance popped up? How many times have we been blind-sided because we decided to let our guard down or we just got plain lazy? And, how many times have things scared us, or startled us, because we were too busy looking out beyond what was right at our own feet? I know the answer for me is “many”. But just like with these Muskie-fail stories, how life-fails impact us depends entirely on how we choose to look at them. I’ve spent years chasing the French Broad Muskie. I’m not giving up. There’s a certain level of satisfaction in the pursuit, whether I ever get one or not.

And perhaps that’s the biggest lesson… There’s a lot to be gained by failure. There is a lot of strength to be found in frustration. And there is a lot of hope in finding the humor of every situation. In an age where it seems everything is right at our finger tips, I think a little Muskie frustration could do us all a little good. See you on the river!

Matt Mittan is a long time broadcaster in WNC, an entrepreneur and USAF veteran who has fished all around the world. He can often be found aboard his classic red Old Town canoe in search of mountain Bass. Matt currently has an insurance business, partnered with AFLAC, providing benefits and tax solutions for area businesses. Email MattsFishingDiary@gmail.com with story ideas or feedback.