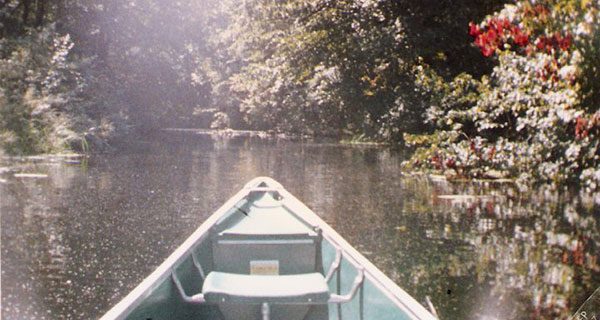 It was our road that no one else could travel. That half submerged stone wall that stuck up like a dorsal fin through the swampy overflow of the river that ran through our old neighborhood. We knew where every loose boulder was, every root cluster that looked like tangled petrified snakes. They were our off-ramps to dry ground.

To one side of this meandering relic of a former cart path wall, was a lazy country waterway that whispered barely above the hint of a stream, but could swell to an angry torrent of racing waves after some heavy rain or a fast snow melt. To the other side was about 2-3 acres of flat, low lying flood plain, bumped up against a steep rise to the forest above. It had long been overtaken by time to become a smelly swamp of mud, moss and mosquito’s. But it was just big enough that it seemed like our own epic gateway to a world that was beyond the reach of our parents.

Only my friends and I dared try to cross the labyrinth. And we did it so many times through the years that we really could glide across like squirrels on fallen logs. Beyond the swamp was where we enjoyed our reward, our sanctuary. Hidden there was the remnant of an old settlement that had faded into nature many years before our grandparents were probably born. The perfect place to feel as liberated as kids can be. It was a long hike through dense woods and undergrowth before you could find any signs of human fingerprints to our rear. And in front of us, the swamp was our mote. The rock wall, our dragon – ready to ward off unwelcome adventurers.

A few years ago, I decided to find my way back to that place. Maybe I was longing for the innocent days of youthful exploration. Maybe I wanted to somehow reconnect with my friends through sights, sounds and smells of our lair. Perhaps it was just curiosity. I’m not sure.

It had been some 30 years. The rock wall was all but invisible, swallowed by the swamp and covered by the forest. To make my way to the old abandoned homestead I had to walk around the swamp, gaining thorny reminders of why the wall was such a valued passageway. When I arrived, the area was so completely grown over that I questioned if I had mistakenly gone astray to a different place. If not for the small island created by a side branch of the river I might have moved on.

That’s when it occurred to me that it wasn’t me that was returning to a place, it was nature that was returning. It was returning to its original state. I felt a certain level of comfort in that. I managed to find one of the old boulders we had rolled into place as a seat next to where we would build small campfires. It was the only thing that remained of the countless hours my friends and I had mused about in this place. And you would have thought, by the moss and small plants all about, that it had sat there for hundreds of years. And maybe it will now.

We are but beautiful moments floating across this gift called life. Find a rock to sit on next time you’re out and think for a moment what stories might have been told in that space before you and what stories may be told in years to come. Celebrate that your path is one that no one can travel but you, but that you are not alone.

Matt Mittan is the daily afternoon talk host on Biz Radio Asheville and is Co-Host of “Matt & Michele Outdoors”, a multi-media program devoted to enjoying nature in the Southern Appalachians. You can find out more information by visiting www.MattMittan.com)