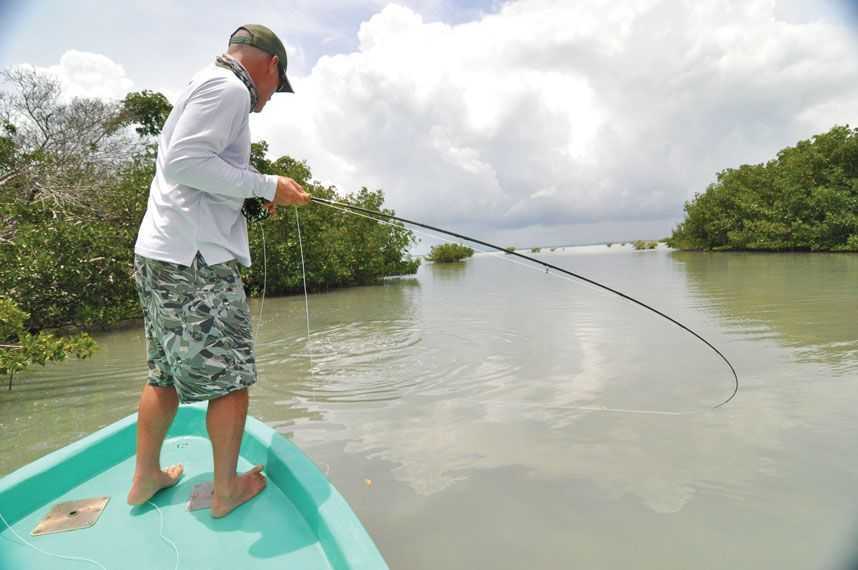 When hooked up to a saltwater fish in shallow water, the higher the rod angle, the less pressure you put on the fish. Lowering the rod’s angle will allow you use of fly rod’s butt section, allowing for more pressure on the fish.

When fighting a saltwater game fish, correct rod angle is crucial. Fly rods are designed for casting and for fighting fish. Because of the fly rod’s length, usually 9 feet, it is more difficult to apply maximum pressure on fish if the rod is held at a 90-degree angle; therefore, adjusting the rod’s angle while engaged in fighting a fish is important.

High-sticking, the rod raised over the head, is not effective when fighting a saltwater game fish in shallow water. In freshwater trout fishing, we are taught to “keep the rod high” while fighting a trout. This move accomplishes two things: First, it protects the light tippet, and second, keeps the fish’s head up, preventing the trout from moving into the current or into deeper water. In saltwater fly fishing, however, we are using heavier and stronger tippets. Thus, breaking these tippets would be close to impossible. Exerting maximum pressure on saltwater fish too quickly subdue them is very important, and is accomplished by employing a low rod angle and using the rod’s butt section to do the fighting for you.

When a large saltwater game fish make a run directly in front of the angler and there is not a good angle to apply pressure to move the fish’s head to change its direction, we do something called “tipping the fish.”

First, the angler tips the fly rod upside down, lowering the tip of the fly rod into the water and applying pressure to the fish as the fish moves away. This pressure will in most cases stop the fish dead in its tracks and roll the fish over.

Once the fish has rolled over, the angler can retrieve line while moving close to the fish (on foot or on a boat). Many times the fish will concede for a short time, which will give the angler time to regain some line.

The “Tip and Roll” is always performed close to the end of a fight. It is a great way to get a fish to the boat quickly for a safe release.