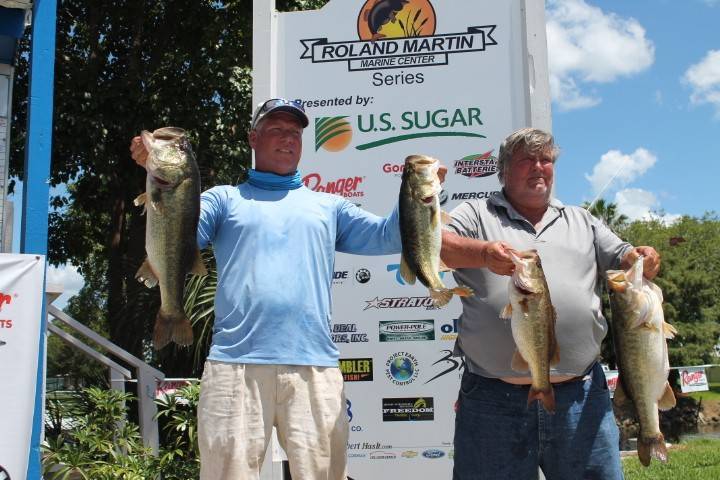 With the summer heat bearing down in Clewiston, Lake Okeechobee still pays off. The August 13, 2016 Qualifier #3 of the Roland Martin Marine Center Series is a wrap and the highest paying bass fishing team tournament trail in Florida put up some big numbers on checks as well as the scales.

With the top 5 teams bringing in 20 pound plus limits, Lake Okeechobee stayed true to its legendary big-bass status. The winning team of Durand Locke and Don Brown took home top honors and a check for $5,000 with a winning total of 25.09.

“We had a chance to practice Thursday and Friday and locked into a pattern that paid off for us,” Locke said. “By 9:30 a.m., we had a limit and started culling. Our second place wasn’t as good as good as our first place, so we returned there for the rest of the day.”

Working outside grass lines, the team was casting swim jigs with Locke wasting no time grabbing the big bass of tournament.

“I caught the big one on our second cast on a Dirty Jigs swim jig,” Locke said about the $500 big-bass catch. “Not a bad way to start the day.”

“We were culling by about our seventh cast,” Krause said. “We found a spot late yesterday during our practice that had a wad of fish on it and we decided we would start there. We quickly rounded up a limit and decided to go look for a big one.”
Their casting pattern allowed them to cover a lot of water with Poland finding the kicker they needed with a 7.09 large mouth hitting a Gambler Swim Jig.

With a little under 23 pounds, third place finishers Brandon Medlock and Chuck Metheney found success flipping jigs before switching to punching mats with Gambler Why Not baits.

With 88 teams participating and checks going out to the top 14 teams, it’s clear to see why this tournament series is quickly becoming a favorite as the highest paying team tournament trail in Florida. There’s one more qualifier October 1, 2016, before the Championship in December that is gearing up for a record payout of $15,000 for the winning team. Big bass and big checks is what this tournament series is all about. Make sure you register early for the next event so you don’t miss out. Visit www.RolandMartinMarineCenterSeries.com for more details. 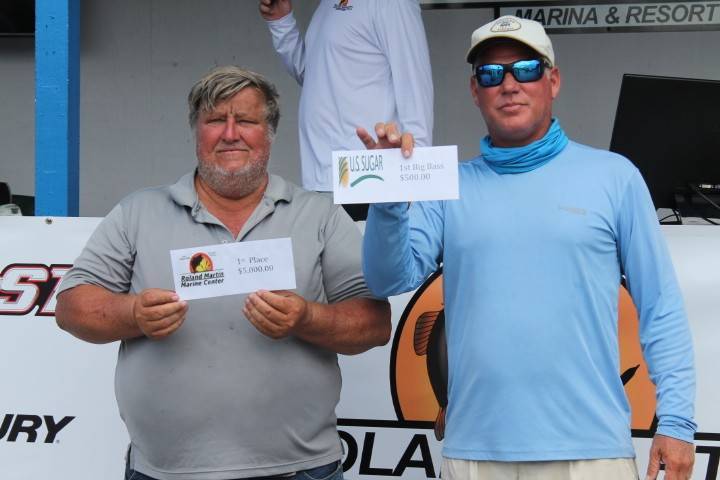