Tripletail are some of the most exciting gamefish that visit inshore waters. Their peculiar tendency to hang near the surface around floating debris makes them perfect for sight fishing, and on top of that they are absolutely delicious.

Capt. Jeremy Davidson is an angler devoted to these oddball fish. His charter service, Southern Salinity, is based out of St. George Island, where he specializes in inshore tripletail on Florida’s Forgotten Coast. 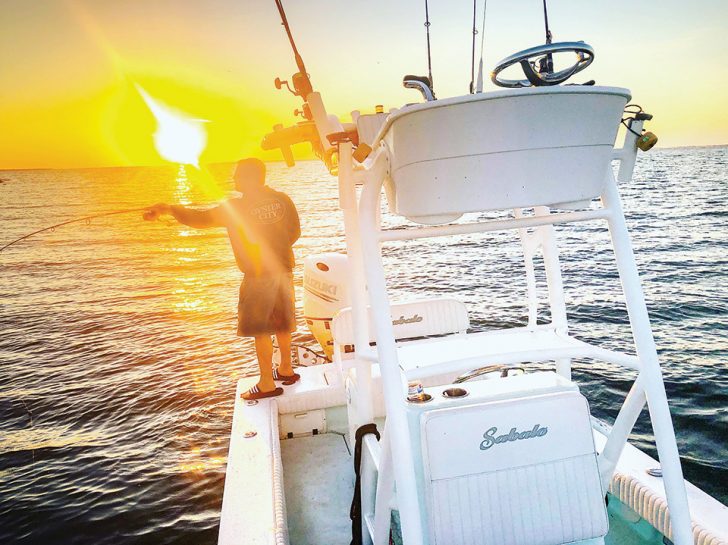 Throughout the Gulf of Mexico and up the Atlantic Coast, tripletail move shallower in waves. Davidson said the timing is different by location, but the patterns are similar. First, scads of smaller fish move in from offshore through the passes to find homes on floating debris. The early spring bite is characterized by plentiful opportunities at smaller fish. By May or June, larger 8- to 12-pounders settle in on trap buoys, floating vegetation and tide lines. Big fish in the 20-pound range arrive in deep summer.

They’re there to feed and procreate, said Davidson, which means they are primed to pick up a bait. However, catching tripletail consistently is more difficult than it might appear.

The Setup: To spot tripletail, you must train your eyes to look beneath the surface. Fish will stay with a piece of floating cover as long as it harbors the small crabs, shrimp and glass minnows tripletail feed on. Cover could be anything, and Davidson recommends checking out everything floating on the surface. You might spot the fish itself, but the first indication is usually the sub-surface flash of a turning fish.

When Davidson spots fish, he leaves the boat in gear and noses into the current to point the bow at the fish within casting range. 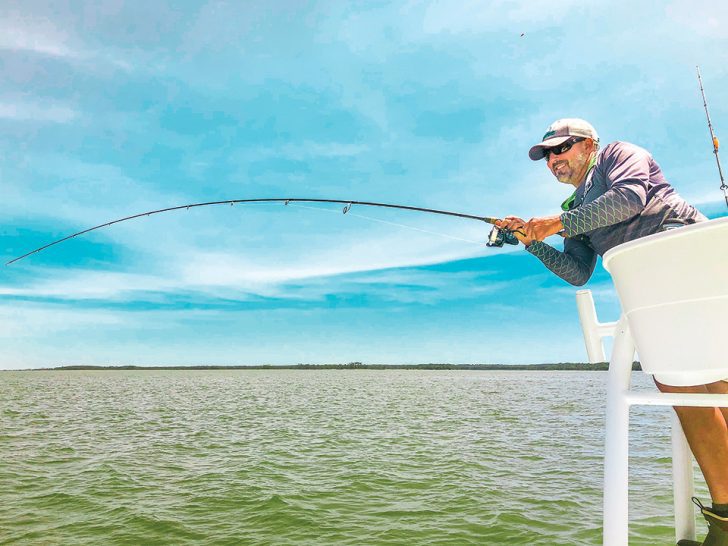 The Cast: “Do not hit that fish,” Davidson warned. “Pick a spot out past it. I don’t care if it’s the treeline. Just make sure to pitch past that fish.”

Casting past the fish with an underhand pitch allows the angler to retrieve the bait slowly through the strike zone. If the tripletail doesn’t take the bait on the initial retrieve, it’s time to flip the bail and allow the tide to carry the bait back past the fish.

The Take: Don’t set the hook! Tripletail feed delicately. They ease up and pluck their prey from near the surface. Then, to avoid spooking their next meal, they move away before engulfing it.

“Let that fish roll down or go the other way,” Davidson said. “Give it 5 or 10 seconds, then lift up and he’s on. Then he turns into a wild man!”

The Fight: The harder you pull on a tripletail, the harder and wilder it fights back. This is important because, along with brute strength, these prehistoric fish have a sharp, line-slicing gill plate. Davidson reiterated his slow dance metaphor, saying you can sometimes lead a fish right to the boat by taking it slow and easy.

“Square up with him. Keep your rod tip up, and let him run if he wants to dig,” said Davidson “Walk him around the boat. Stay square with him, and pump him in slow and easy.”

The Rig: Tripletail eat shrimp, pogies and artificials, but Davidson prefers to make a fresh-shrimp lure. He pops the heads off large restaurant-quality shrimp and pinches the flappers off their tails. Then he runs a 2/0 or 3/0 3X Strong VMC circle hook up the tail and out the second notch before turning the point back into the bait. This hides the hook and allows the shrimp to swim like a lure.

To make pitching the rig easier, he ties an elongated float, like Boat Monkey’s Cigar Slip Float, between braided 30-lb. main line and a 2- to 3-foot leader of 30-lb. fluorocarbon. More advanced anglers might go bobberless for better control while working the bait. To do this, tie the braid directly to the leader with a double uni knot.