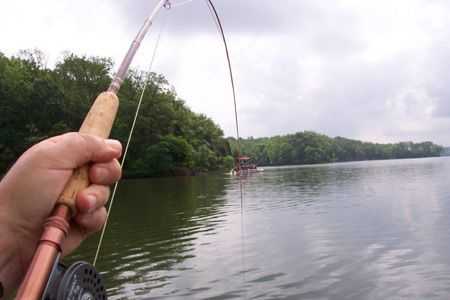 “Look at the bend in that rod,” my friend shouted excitedly as the soft tip scribed an arc almost to the water’s surface that resembled an inverted C. While the fish loafed comfortably somewhere in the bowels of the sea, his arm, shoulder, and back muscles began to ache. The angler continued to believe that the whippiness in the rod would overcome the fish’s power in short order and he would land his prize. He was wrong on both counts.

Sosin’s Law maintains that where the head of the fish goes, the tail is almost certain to follow. It simply points out that if you cannot move the head either vertically or horizontally, your chances of victory diminish with each passing minute. Eventually, our friend’s fish gained its freedom, but it gave him the opportunity to add another tale about some unseen monster that was too big to handle.

Every rod seeks a compromise among the tasks of presenting bait or lure, setting the hook, and slugging it out effectively. The rod should boast more muscle than most folks would choose and a tip that stands its ground rigidly without bowing almost before the fight starts. If you’ve ever watched a team of oxen strain to pull an oversized load, you know that the animals stiffen their shoulders and chest, transferring the power into the legs. It’s an awesome sight of unyielding physical strength. That’s precisely what a fishing rod must do. The initial resistance starts in the tip which might bend slightly. As demand for power increases, it progresses down the blank toward the reel seat.

Anglers refer to this characteristic as lifting power. It’s vital if you intend to pump a fish to the surface or draw it closer to the boat or beach. You can compare lifting power with a hunk of lead or a sash weight. Attach six inches to a foot of line past the tiptop to a weight and try lifting it while holding the rod as you would when fighting a fish. As a rule of thumb, 12-pound test line should be able to lift about five pounds of dead weight.

If you have the opportunity, mount a reel loaded with 10-pound test monofilament on a stiff rod—one that you might use with 15 or 20-pound test line. Rig the line through the guides, tie it to a stationary object or even a doorknob, step back 30 feet, tighten the drag on the reel so it does not yield line, and lean back as if you were fighting a fish. Try to break the 10-pound test mono with the rod at a 45-degree angle. That should convince you that you can fight a fish on light line with a powerful rod without overloading the mono.

Blanks with soft tips and a lack of lifting power may feel good in a store, but they take away your ability to beat some meaningful fish. Once you feel the power in a properly designed rod blank, you’ll discard any notion that a bouncing, flexible tip tires the fish.