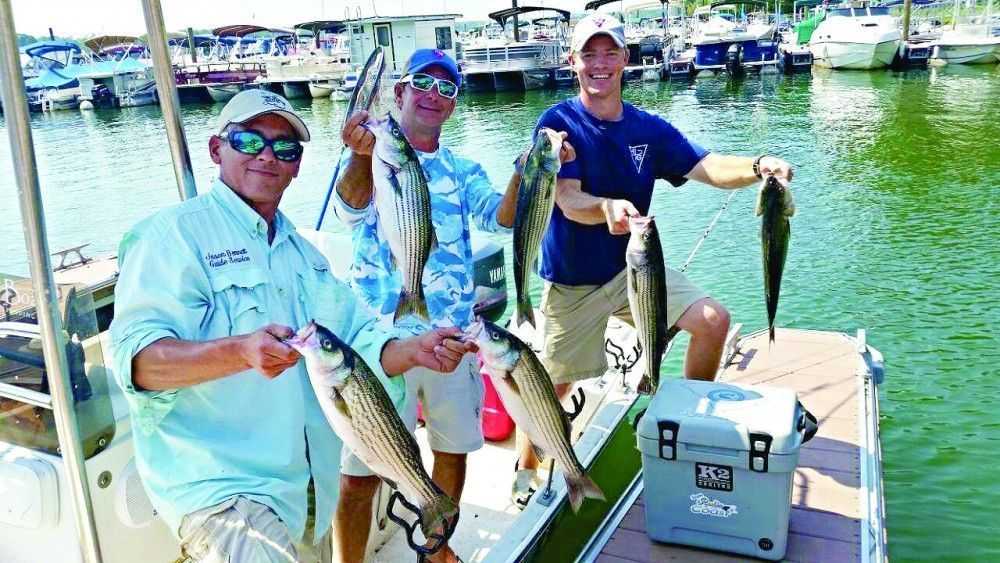 “Saltwater is for fishing and freshwater is for drinking!” This is a phrase that a lot of us die hard salts use. Well, I spend a lot of time on the “drinking” water, and I enjoy every minute. Recently, I was invited to join a good friend, Capt. Jason Bennett, on Lake Murray in Columbia, S.C. to target late-summer stripers.

This lake is enormous, with more than 500 miles of shoreline and 50,000 acres of surface area. Built in the 1920s, it is the result of damming the Saluda River. This lake is a put-and-take striper fishery. Due to the lack of access to moving water and the environment they need to reproduce, these fish are unable to do this successfully. But with South Carolina releasing over a million fish a year, there is no shortage at all of striped bass. During the summer months there is no size limit, and a five fish limit per person with no releases. These fish get stressed during a fight in the heat and have little to no chance of survival. It is not uncommon to catch the limit in a short period of time if you are able to find the large groups of fish. Live bait fishing around these deeper schools in the summer can lead to some insane action.

We met Capt. Jason for a late afternoon trip with an early morning trip planned for the following day. I brought my cameraman Richard and a good friend Michael Sims, owner of Hook and Gaff Watch Company. We were all excited to rip some lips and load the cooler with great eats. The evening fishing was slow until the captain got us on a school stripers chasing herring through a shallower area. It turned into chaos on the boat. With multiple hookups coming one after the other, we quickly had 15 fish in the boat and our biggest was a nice 13-pound fish. We decided to call it quits to prepare for an early morning on the water.

Pulling away from Jakes Landing with a livewell full of blueback herring, we were out with lines in the water at 6:15 a.m. And we were blessed with fish and a beautiful sunrise over the dam. The fish were suspended at 30 feet over a 60-foot bottom. We stayed on the school for a couple hours until they moved out into the deeper water. The technique is very simple, 2-ounce egg sinkers and 3-foot leaders and No. 3 Gamakatsu Octopus hooks. Basically a Carolina rig.

If you are interested in fishing with a great captain that spends countless hours finding fish, contact Captain Jason Bennett’s Guide Service at 803-716-4661. The fall and winter fish are a lot bigger, and offer opportunities for a trophy striper as the captain changes to slow trolling with planer boards and targeting the fish in shallower water.