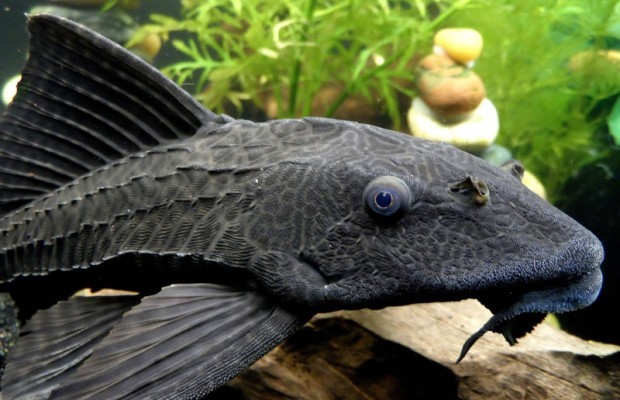 This month’s Species Spotlight focuses on another non-native species introduced once again by the releasing of aquarium fish into the waters of South Florida. For those who fish freshwater ponds, lakes and streams, you probably have caught a prehistoric looking catfish with thick boney plates which are commonly referred to as armored catfish or Plecos. These suckermouth catfish are native to tropical South America and Central America and were introduced to Florida back in the 1950’s as part of the growing aquarium trade. In home aquariums, they are used to clean the bottom of the aquarium and control algae and detritus build-up.

In Florida there are three dominant species of armored catfish swimming in our waters, the Sailfin Catfish, the vermiculated Sailfin and the Hypostomus (Plecos). However there are probably many other subspecies located in isolated ponds and canals freed from their aquariums by irresponsible pet owners. Among the three dominant suckermouth catfish, they all have rows of bony plates covering their entire body except for their bellies. Sailfin catfish are distinguished by a worm-like pattern of dark markings on the head over a dark-golden background, pectoral fins stout with rough surfaces resembling course sandpaper; 10 or more dorsal fin rays; discrete brown spots on the belly, and a disc-like protrusible mouth under the head which is used like a suction cup to attach and feed on algae encrusted objects. The vermiculated (wavy line) sailfin is similar in appearance to the Sailfin catfish with the exception of a greater pronouncement of the worm-like markings especially on its belly. The Pleco is a shorter, stouter fish with a pattern of black spots on the head and less than 10 dorsal fin rays.

These suckermouth catfish live in nearly any type of slow moving stream, canal, pond or lake and are most frequently found along the shoreline and in shallow waters. They are rarely found in stagnant waters. Depending on the species they can grow to lengths up to 24-inches and weigh 3-pounds.They are known to create long burrows along the shoreline where the female will deposit her eggs during the spawn. These burrows are a nuisance and hazard for they can collapse upon the weight of a human which could lead to injury and they increase the likelihood of erosion along canal and lake shorelines.

Generally suckermouth catfish feed on algae, detritus, small bivalves, water fleas, worms, insect larvae, etc. But as most panfishermen have learned, if their bait is too close to the bottom, an armored catfish will eat dead minnows, crickets and other small baits. I’ve even caught them on artificials slow-rolled over the bottom at some local spillways.

The big question is are they any good to eat. If you’re up for the challenge of cutting through the thick layer of belly skin and preparing it like a lobster within its shell, then you’ll find the meat to be white and flakey. As for its taste, if taken from clean water the best you can hope for is fair to good flavor, but in most cases these catfish are caught in murky and stained water and you’d be better off opening up a can of tuna fish. If you are the adventurous type and just have to try eating an armored catfish, you can’t go wrong with a little butter, some bacon and a sprinkling of Everglades Seasoning.

As with all non-native fish, there are no Florida regulations in the harvesting of these fish. You are also asked not to return these fish back into the water alive. However just don’t leave them on the canal bank or spillway catwalk to rot in the sun. This not only attracts unwanted scavengers, this destroys the fishing environment for others and leads to the forced closure of our favorite fishing holes. Just return the carcass into the water where it came from and Mother Nature will return it to the food chain.

Armored catfish are just another name on a growing list of non-native fish residing in our local waters and are probably here to stay. It’s just sad how a few irresponsible individuals can impact the balance within our environment.