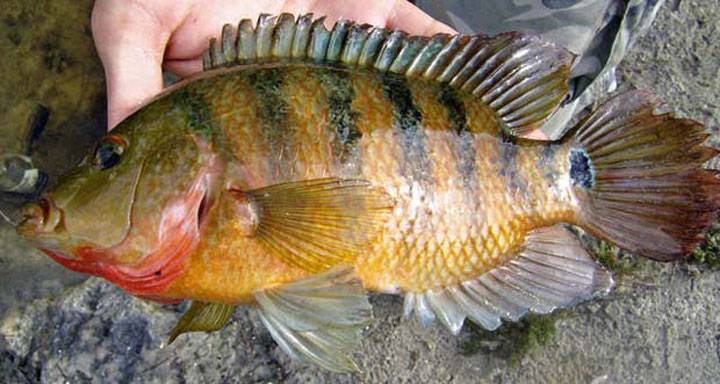 The Mayan Cichlid is another non-native species on a growing list of exotic fish thriving in the warm waters of south-central Florida. Native to Central and South America, the Mayan Cichlid made its first appearance in Florida Bay in 1983. Since then it has spread into many freshwater canals and lakes from Miami up into the Kissimmee Chain of Lakes.

The Mayan, like its cousins, the Peacock Bass and Oscars, are Cichlids and all have a spot on their tail. Mayan’s have a black spot with a turquoise border, Peacock Bass have a black spot with a yellow border and Oscars have a black spot with red border. The Mayan Cichlid also has a broken lateral line and 6-8 vertical bars on its body which can vary in color and vibrancy. With their body shape similar to Oscars and Blue Tilapia, Mayan’s are often miss identified.
Mayan Cichlids are highly adaptable and can survive water temperatures down to 48-degrees, withstand a wide range of salinity, as well as low oxygen environments. This allows them to thrive in canals, creeks, rivers, lakes and marshes. Spawning generally begins in April and continues through June. Both the male and female will guard the nest and its brood for up to six weeks.

The good news is that their mild white flesh makes them great table fare and being a non-native species, there is no season or daily bag limit on these fish. Presently there is no official Florida State record for the Mayan Cichlid with the entry level being set at 2.0 lbs. So far the largest Mayan submitted to the FWC has been a 12.6 inches 1.5 pound specimen. The world record for the Mayan Cichlid is 2.5 pounds. This species is eligible for FWC’s Big Catch Program with a minimum entry set for adults at 11-inches or 1-pound.

Mayan’s are aggressive feeders and provide a great fight on light tackle. They will take a wide variety of natural baits including grass shrimp, minnows, worms, crickets, and such. They can also be taken on artificial lures like small Rapala-like stick baits, beetle spins, crappie jigs, and even small top water plugs. If you’re into fly fishing, Mayans will take streamers, wooly worms, popping bugs, and a host of other insect imitating flies. When combined with ultra-light gear, fishing for Mayan Cichlids can result in a fun filled family outing.