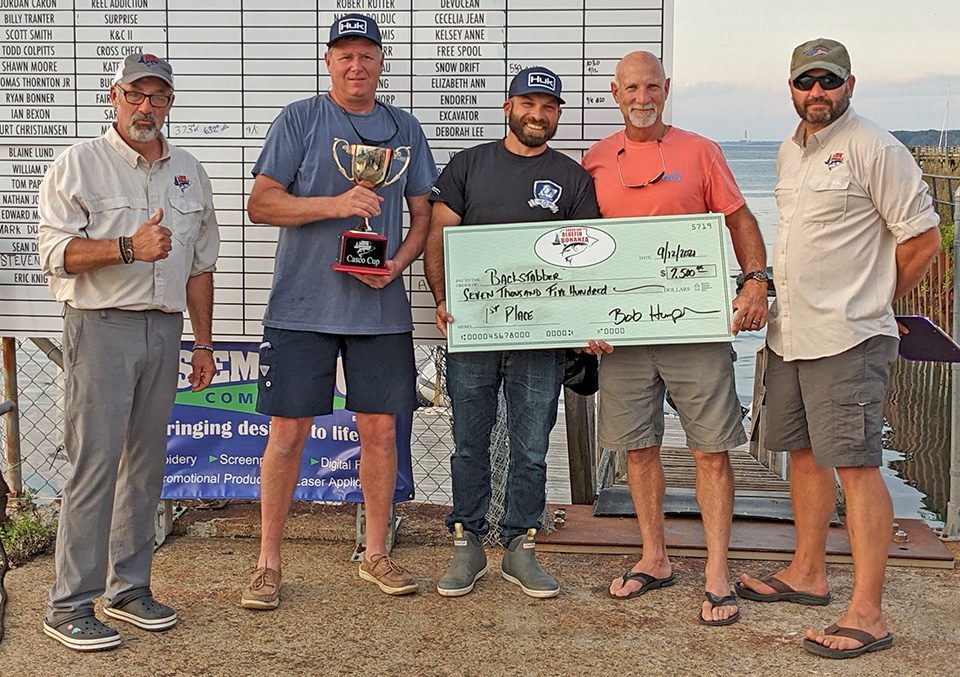 SOUTH PORTLAND, ME. – Local captain Pete Speeches of Scarborough and the crew of Backstabber, brought a giant bluefin to the scale weighing 719 pounds to win the Third Annual Casco Bay Bluefin Bonanza and the coveted Casco Bay Cup, their second consecutive victory.
It was a fretful and tenuous year for the Bonanza as proposed Restricted Fishing Days threatened to scuttle the event, then an 11th-hour category closure forced postponement of the three-day tournament from early August to early September. Despite the tremendous inconvenience to all, and a less than favorable forecast, the boats set out and didn’t disappoint.
First to the dock on Day 1 was Endorfin with a 511 pounder. Keith Jordan of the Bailey and Bella quickly set the bar higher with a fat tuna that weighed 700 pounds on the nose. Speeches was hot on his tail, arriving at the scales just 20 minutes later with what would eventually prove to be the tournament winner. He was preceded by Mitch Napalitano’s 598 pounder, moving Mitch down to a third place position, at least temporarily. Perennial frontrunner Kurt Christensen and the Molly Jane came in with a 373 pounder with Wasabi, High Anxiety and Lion’s den bringing in fish of 478, 311 and 440, respectively.
Forecasted high winds and thunder showers kept many boats off the water on Day 2 but Backstabber, vying for the cumulative weight prize landed their second, a 467-pounder followed by Bailey & Bella’s 582-pounder. Bounty Hunter II, one of the smaller boats in the tournament went way offshore and after a 5-hour battle managed to wrangle in a 422-pounder, and make the scales before they closed.
Despite challenging conditions, the crew of Molly Jane showed their mettle, bringing in a 632 pounder to open Day 3 that would ultimately hold up in the top five. Hot on their heels was Bailey & Bella with a 646-pounder that would take fourth place and secure the overall cumulative weight. The final fish was ANUT’s 698-pounder, which moved them back into third place.
In the end, over $18,000 in prize money was handed out, including a top prize of $7,500 and the Casco Cup for the largest fish. More importantly, the Bluefin Bonanza raised enough money to ensure that 14 students, two from each of Maine’s seven community colleges will receive a scholarships next year. The Bonanza will also be able to fulfill their endowment to the Foundation for Maine’s Community Colleges, ensuring there will always be scholarships in the future. Furthermore, a new endowment will be established with the University of Maine’s School of Marine Sciences and the Gulf of Maine Research Institute to support vital bluefin tuna research that will ensure the resource and the fishery remain sustainable.