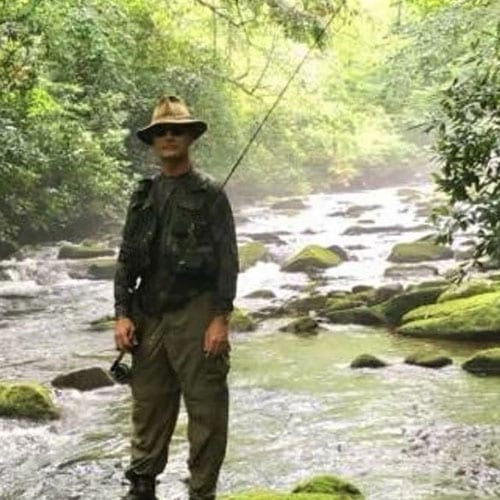 Several years ago while visiting a popular fly fishing shop in Jackson Hole, Wyoming, I was reminded of the need to carefully approach the “spooky” cutthroat trout in nearby Flat Creek. At the end of the day, I realized how “tame” those trout were in comparison to the wild rainbows, and especially the wise old browns, in the Great Smoky Mountains National Park (GSMNP). Since the cessation of stocking in the 1970’s in the Park, the trout have continued to be born and spend their entire existence in a daily struggle of life and death. Needless to say, by the time a brown trout reaches the 20” mark, it has achieved several years of mastering the avoidance of predators, man being one. Fortunately for the trout, all too often, anglers come dressed as though for a deer hunt, in bright orange, or imitating anglers they’ve seen portrayed in many magazines wearing brightly colored clothing. Just last weekend, multiple fishermen could easily be seen from a hundred yards away, down in the creek from the adjacent highway or trail. Whether due to the lack of knowledge or underestimation of a trout’s ability to see or detect danger on the part of the angler, attire worn and stream approach is low on the list of priorities for many anglers. While many anglers will spend hundreds, and sometimes thousands, of dollars and many hours finding the magic fly and using the lightest tippets, they’ve already greatly reduced their likelihood of success before reaching the water. This is a first in a series of articles devoted to what I’ve learned in my 44 years of chasing the wild, elusive trout of the Smoky Mountains. The actions and literal steps taken prior to making your first cast will have the greatest impact on the outcome of your day on the water and your chance to get that once in a lifetime trout.

The visual acuity of a wild trout to a potential predator and its reaction to a threat in clear water can be amazing. This lesson hit home with me one sunny December morning while trophy “hunting” with a friend as we drove along Little River Road between Townsend and Elkmont. When my friend spotted a large trout in the tail-out of a long pool, I eased over into a pullout. From well over a hundred feet away, the trout darted into hiding. To me, that was a wake-up call for the need for stealth, which I’m still working to improve upon.

As any successful predator learns, blending into the surrounding environment until the moment to strike is the first necessity in taking prey. Whereas most predators are born with a head start on humans, we must start with the most appropriate attire so that we, too, blend into the environment in which we are hunting. To do so, we must consider what is seen from the trout’s perspective. Without going into the angles of light bending due to surface refraction, simply look behind you. Unless you are positioned directly above the trout (not recommended), you should blend in with what is in your background. This changes by the season, but rarely is it fluorescent yellow, bright white, or blaze orange, yet I see many anglers proudly donning these colors, often with long sleeves flashing around with every cast. Also, the hat, which is the highest point of your body should not be a bright color or have a bright logo. Whereas the western states may be best suited for light brown or khaki, the Appalachians tend to have more dark green rhododendrons. In order for me to have my best shot at the wild, alert trout of the Smokies, I wear drab green and brown camouflage, long sleeved shirt, brown hat and pants. Lately when I’m fishing low, clear water, I’ve added a camouflage neck gaiter and fingerless, camouflage gloves to hide my hands as I’m making casts. I always wear brown polarized glasses as well. Now that colors are blended, take a close look at those shiny tools attached to your pack or vest. Does anything, fly rod, reel, wristwatch, ring, snipping tool, forceps, etc. have a potential to reflect light onto the water’s surface? To a trout, it would be akin to a strobe light. While trout can and are caught by anglers wearing bright clothing, taking the next step to catching more and larger wild trout may be as simple blending in. Now that you’re dressed for success, comes the hard part. Part 2 will be…. The Approach!

Jim Parks, a native of Newport, Tennessee, has spent forty-three years fly-fishing in the Great Smoky Mountains National Park, which he considers his home waters. He has written articles for Fly Fish America, taught courses, and spoken to civic organizations on fly-fishing. Jim is the author of “Tails of the Smokies”.