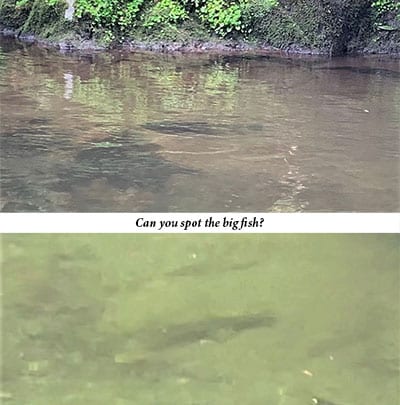 Last month’s article focused on what to wear to reduce your likelihood of being spotted by those skittish, wild trout and wily browns of the Great Smoky Mountains National Park (GSMNP). This week, we’ll cover the approach. So, you’re dressed for success and your fishing buddy can’t see you when you stop moving… Now what? In a recent article where guides were asked for the single biggest mistake made by clients, 5 out of 15 (33%) mentioned approach. So, even though you’ve dressed to blend into the surroundings, if you go stomping into the water, all your efforts are wasted. The approach begins before you reach streamside.

Many years ago, I was hiding behind a tall tree, looking at the lower end of a large, popular pool in the GSMNP. There was a particularly large brown I’d been “chasing” for a few months. He was slowly finning no more than ten feet from shore! While I was watching the behavior of my target and planning my approach, two fishermen walked right past me, stepping into the creek before they’d even tied on a fly. Maybe I was blending in so well, even the fishermen didn’t notice? Doubtful, but for certain, they didn’t notice that huge trout they had just flushed out of his feeding lane. Believe me, it happens a lot.

The first step, literally, when approaching a stream with wild trout is to engage with your eyes. Even a cheap pair of sunglasses (no offense to ZZ Top), can open a new world, but it takes time and practice. When I first took deliberate steps in looking for trout, I had to pay my dues and spend time that I’d rather have been spending casting a line. Over time, as I trained my eyes and brain, I began to notice shapes and movement, such as an object that looked like a rock at first, but wasn’t, a shadow on the bottom of the stream, a tail fin wave, the flash of a trout’s body, or a mouth open. I soon realized the more I looked, the more fish I saw. I learned to sometimes wait for a “window” of smooth water to pass over the area of interest offering a better glimpse. My first real achievement was “Teflon”. He was a trout of 28-30 inches that I spotted while walking up the road overlooking the creek. He was about 8-10 feet deep on a large, flat rock. What I thought was a dark spot allowed me to see only his tail slightly wave as a “window” passed over. He got the name “Teflon” after a couple of us hooked it, but could never get the hook to stick.

Once you start spotting small trout before they move, you’ll gradually progress to larger trout. First in clear, shallow water on a sunny day and eventually in deeper water on overcast days. At times, when “hunting”, you may need to tilt your head from side-to-side to obtain different angles whereby the polarization of your glasses works so that the glare is lessened, allowing greater visibility into the water. Another trick is to block the sides of your eyes from incoming light. I’ve found side shields that slip onto the side of the glasses help very much. If not available, your hands can help, but be careful that moving your hands doesn’t spook trout. Also, I ALWAYS wear a hat to shade my eyes from overhead light, even on cloudy days. Ever wonder why many wise old trout hide in dark places? From darkness, they have protection but they’ve learned they can see out into the lighted areas better. Back when I did some saltwater fishing, I applied black shoe polish to the underside of the bill of my cap to limit reflection from the water. Not only did it help me see better, it resulted in less eye fatigue at the end of the day. Now, I can’t help but laugh when I see a fisherman with their hat on backwards looking into the sun. Style points rarely lead to better fishing.

Another old trick is to approach with the sun at your back. From the trout’s perspective, it’s hard to see an approaching fisherman when looking into a bright light. However, never allow your shadow to move into the area you’re fishing. That’s a cardinal sin that will lead to trout scurrying to the nearest hiding place. The best way to prevent your shadow from hitting the water is to stay as low as possible.

So, what if the water is dingy and/or it is raining and making it difficult to see into the water? Well, for every condition, there is a pro and con. If you can’t see because of the rain pelting the surface or the water is too dingy to see far into it, or both, neither can the trout see you if you’ve dressed to blend. Now, use that to your advantage. I’ve found heavy, sudden downpours to be the best time to hook up with trophy trout. Not only do they seem to get a bit bolder as they feel hidden and cannot see you through the water’s surface as you approach, but more food is washed into the stream, putting them on the feed. If you’re familiar with a stream and know where the larger trout like to hold, this is your chance to approach closely. Next month, we’ll be taking our first step into the water.

Jim Parks, a native of Newport, Tennessee, has spent forty-three years fly-fishing in the Great Smoky Mountains National Park, which he considers his home waters. Check out his book “Tails of the Smokies” in local bookstores. Jim currently resides in Kodak, Tennessee, with Trena, his wife and best friend of thirty-three years.