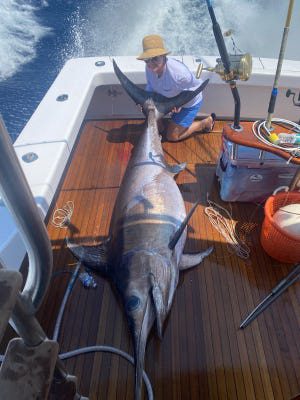 On April 16, the Stuart, Florida, Jennifer Cameron. caught the largest swordfish of her fishing career, weighing in a giant that tipped the scales at 436 pounds.

Catching a nearly quarter-ton brute like a swordfish is a challenge in and of itself. Doing so while struggling with a 102-degree temperature is something else completely.

“I wasn’t feeling that good that day, a day after I received my second Moderna vaccination” for COVID-19, she told TCPalm | Treasure Coast Newspapers, part of the USA TODAY Network. “But we needed to catch a fish, so I went along. After we boated it, I could feel my fever, went into the cabin and wrapped up in a blanket and slept on the boat ride all the way back into the marina.”

Why did she need to catch a fish?
The reason they were fishing in the first place was because Cameron is one of the lead organizers of the Black Gold Jubilee, an annual spring festival and charity fundraiser celebrated at the Torry Island Campground in Belle Glade, Florida.

One aspect of the event is a fish fry. Cameron wanted to catch a fish large enough to feed scores of attendees, so targeting a swordfish would have achieved that goal.

“Sometimes we get criticized for keeping a fish that large and not releasing it. But we literally provided about 300 pounds of fillets to use for the fish fry and to provide to families in the Glades who needed fresh fish,” she said. “We only kept a few small pieces for our family.”

She also was able to educate people about the difference between swordfish and marlin, a similar-looking fish whose harvest is strictly limited in U.S. waters and that’s not sold as a food fish here.

How she almost lost the swordfish
Catching this sword almost didn’t happen, her husband said. The fish apparently was hooked in the dorsal fin — not in the mouth.

“We were straight out of the St. Lucie Inlet in 1,650 feet of water and using bonito belly as bait,” he said. “On our first drift, we had a bite but the fish came off pretty quickly. So we pulled up, ran back south (up current) and began our second drift. As soon as Nick put the lines back out, I turned my head and when I looked back at the buoy, it had disappeared.”

That told the experienced anglers two things: The fish was hungry and it was big.

One common method to catch swordfish employs the use of a large buoy to keep the bait deployed well away from the boat and at a sufficient depth to catch the attention of a swordfish. They are known to inhabit the dark depths below where sunlight penetrates from the surface — at least 300 feet down.

To get the bait down that deep, Cameron used a 13-pound lead weight. He said the buoy didn’t surface for a long time. After it did, and they were able to disconnect the lead and retrieve it, the fish came to the surface and jumped.

“It buried the buoy for 20 minutes, telling me it was a really big fish. When it jumped, I knew it was bigger than 350 pounds,” Glenn said. His wife was reeling the fish in using a Lindgren-Pitman electric reel.

“Once we got the lead off, the fish went back down to 100 fathoms (600 feet), below the Gulf Stream water. After we got the fish back to the boat, it was time for Nick to harpoon the fish. Although he had never done that to a swordfish before, he did an excellent job and stoned it, ending the fight,” Glenn said.

Then it was up to the captain and Cremasco to gaff the fish and haul it in through the 60-footer’s tuna door.