“If you want to have fun, go to Disneyland,” said my friend and fly casting mentor Peter Lami. “Night fishing for tarpon is serious business, not some fun little fishing trip!” As always, his advice was true. It was time to go fly fishing after months of preparation tying flies, buying gear, daydreaming, (and nightmares), planning every aspect, even casting in the dark to sharpen my skills.

It was June and I was ready. I flew into Key West and drove up the Keys. I got to the house and took a nap; we could be up all night. Peter watched the tide; it was a strong outgoing tide that threatened to push us between the bridge pilings that night. We could be smashed against the bridge, and that could be the end of us. I started thinking that my inflatable life vest would just make me a ‘dry fly’ to a shark, but the tarpon was rolling at the bridge.

I made a cast behind a piling, let it drift, stripped it and boom—the rod shuddered and my body filled with adrenaline. The line was so tight, but I had to wait; don’t set the hook, wait. Line shot off the deck and it was going too fast to scissors strike, so I had to set it against the reel’s drag. As I did, the tarpon jumped and jumped again; she was too fat to get all air, and then all hell broke loose. We cleared the deck, and got a light to figure out where she was going; it was the other bridge. Steering the rod to the side is like trying to get a horse to change directions when it doesn’t want to; the fight is like a kids tug of war, arms straight, knees bent and fighting with your legs. Would she go around the piling, should we start the boat or not? The tarpon was starting a run, and I tried to decide whether to go against the drag or palm the reel? As I did, the handle wrapped against my knuckles as I misjudged the timing of its acceleration.

After an hour we had the fish to the leader a few times, but as soon as I tried to reach for her she gave a few waves of the tail. I wanted to break off, I was beaten, but Peter reminded me “it’s a fish of a lifetime on a fly rod, so hang in there!” It was 3 a.m., and I was face-to-face with a 125-pound beast that I wanted to lift for a photo. I wasn’t sure I had the strength to even lift her, and if I reached down into the black water, would a shark grab me? We were eye-to-eye, and the headlamp made her eye glow a deep amber and her gill plate shined like a mirror. Three miles out into the Atlantic on a full moon night and there wasn’t a ripple on the water. I took the hook from the corner of her mouth and she tilted her body away, as the headlamp made her light up and seem even larger as she swam away. 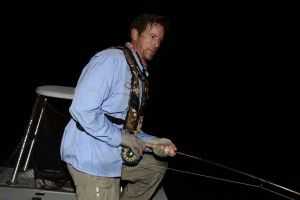 The best photo from that evening showed the angler soaked in sweat, arms dangling, with a smile that said it all. Hey Peter, secret be known—I had fun.