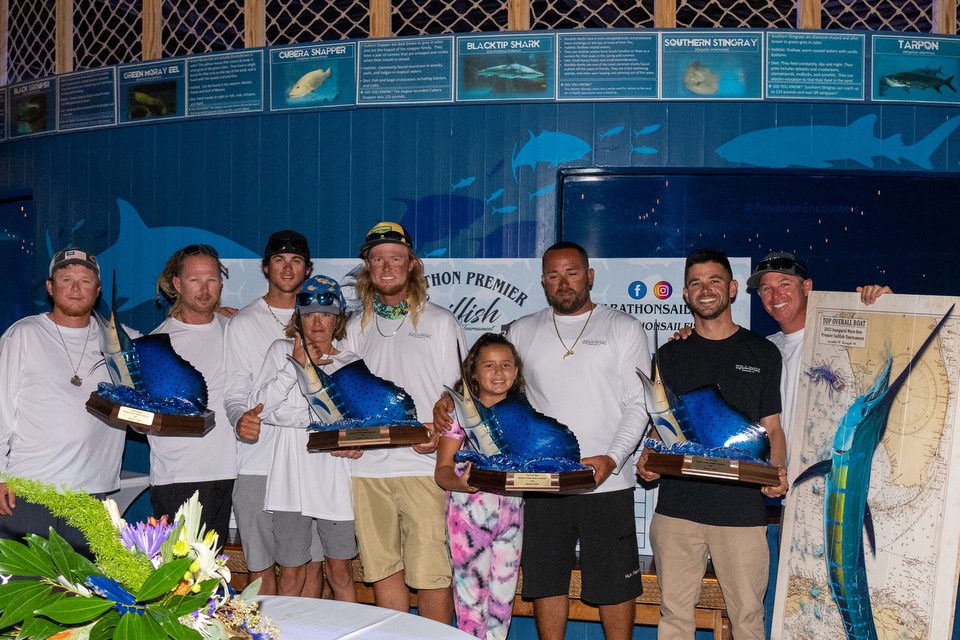 The First Annual Marathon Premier Sailfish Tournament kicked off at Fairfield Inn, hosting some of the 89 anglers, plus friends and family. The wind was gusting up to 30 miles an hour at the outdoor event, but Marathon fishing pros are tough; they didn’t bat an eye. Many of them commented that they had fished that day, and despite the sporty conditions, they were excited to fish over the next two days. 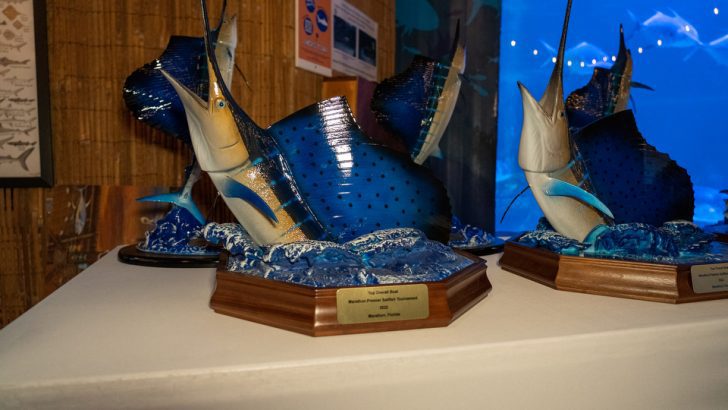 On day one of the event, April 22nd, 2022, approximately half an hour before 8 am lines in; the weather was not on anyone’s side. It was raining heavily, and winds were gusting over 30 miles an hour. It was a pleasant surprise to find out that nearly all of the 17 boats that had signed up to fish would tough out the rough weather for a good cause.

Even the committee boat was  set up outdoors in the wind and rain to get the best radio reception they could get. The committee consisted of Katie Lewis, the founder of the tournament, Dianne Harbaugh on the radio, Michael Rodriguez on live scoring, and Nicholas Yeager on website/tech and social media. 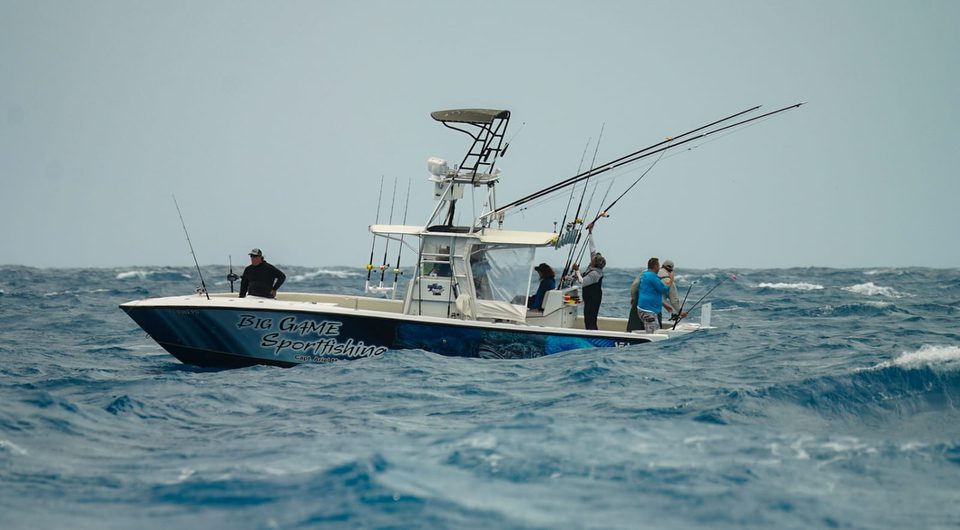 At 8am lines in was announced, and the first annual Marathon Premier Sailfish Tournament was underway. After 43 minutes of waiting, the radio silence finally broke. Silent Hunter Captain Bj Meyer called in the first hookup of the day. The committee boat let out a sigh of relief; despite the poor weather and visibility, it was going to be possible to find some Sailfish! To their dismay, the Silent Hunter reported the fish as lost several minutes later, but their hookup had given everyone hope. One hour later at 9:42am Captain Ariel Medero reported a successful sailfish catch and release aboard the Big Game with angler Robert “Reggie” Hiro on the rod. The rain had passed land by now, but the blustery winds continued, and the teams still had to contend with pockets of heavy precipitation as they navigated within the tournament’s boundaries. 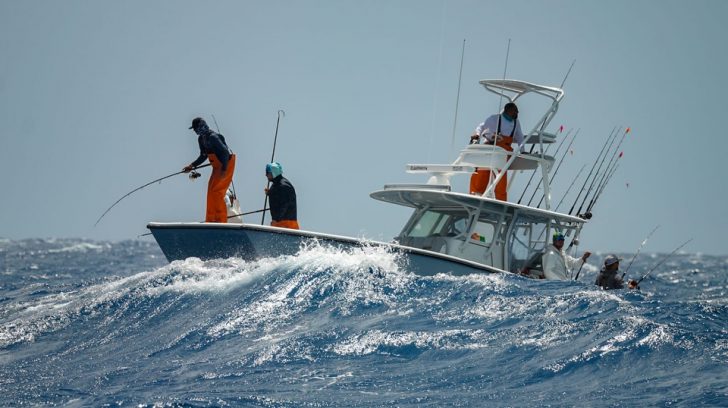 After several hours of grinding away and losing kites to the high winds, something wonderful happened at 12:41pm. Captain Alex Hernandez first broke the silence calling in a hookup for the Main Attraction-Sails Call. Over the next 5 minutes, both team Silent Hunter/ReelEstate and Main Attraction II also reported hookups!

By 12:49 Alexis Bowcock was the first Female on the day to catch and release a sailfish putting her at the top of the Female angler leaderboard and her team Main Attraction-Sails Call in second place overall. The action continued as two minutes later, team Reel Attraction also hooked up to a sailfish. One minute later at 12:52 Team Silent Hunter/ReelEstate posted a release putting angler Lee Gahagen and Team Silent Hunter/ReelEstate on the board. 3 minutes later team Main Attraction II released their first sailfish of the day. 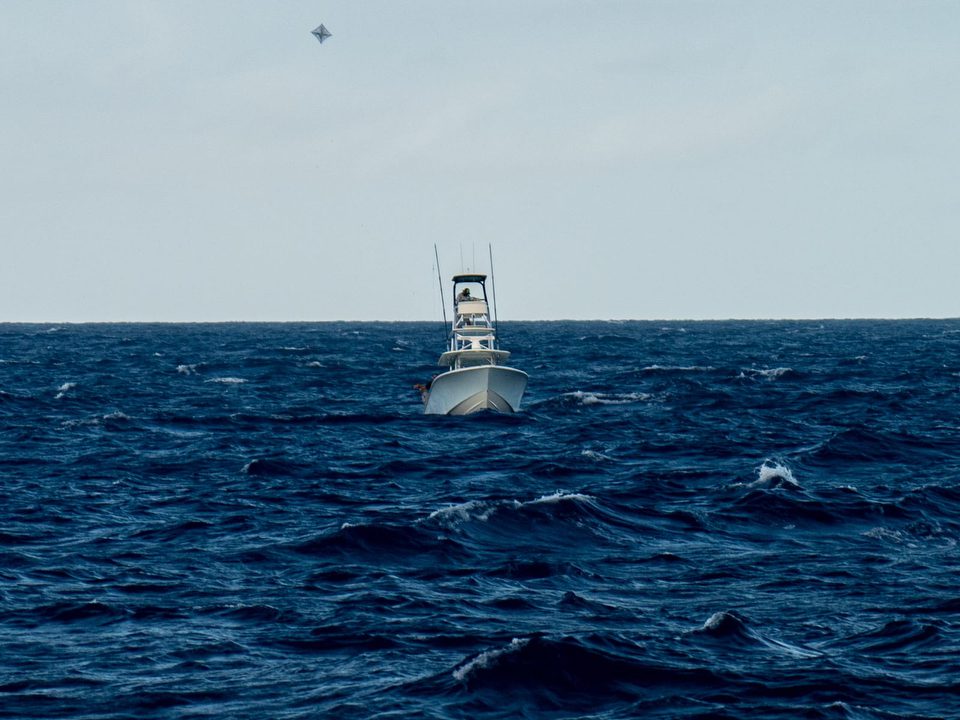 Unfortunately, team Reel Attraction lost their fish, but when the flurry of activity was complete, the Marathon Premier Sailfish Tournament now had 4 boats on the leaderboard and several anglers vying for the Top Male and Female Angler positions. 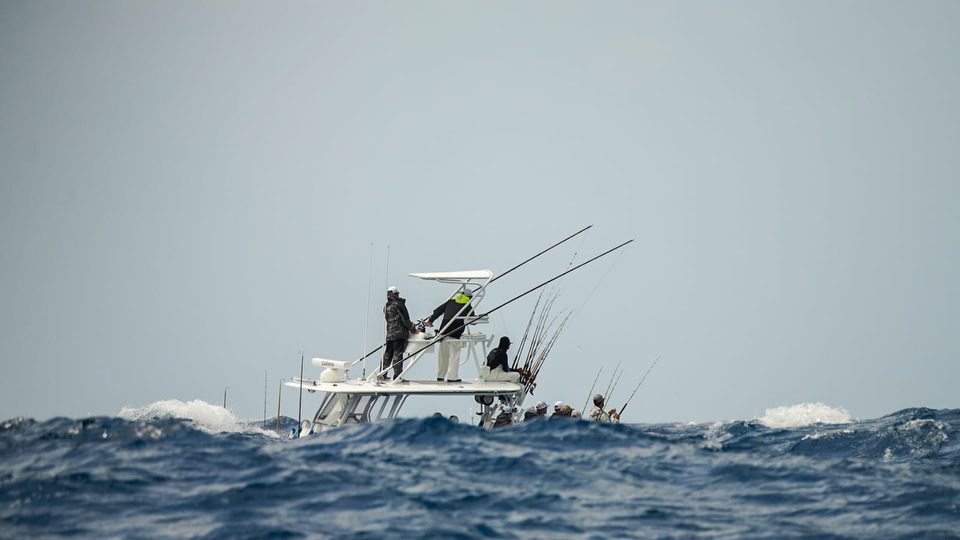 After an afternoon lull, at 3:49pm team Ofishal reported another release, this time with Philip Quincy Byron Jr. on the rod. 4pm arrived, it was lines out and day one was officially complete. It was a long and tiring day for everyone, but when it was all said and done, the fishing teams had filled most positions on the leaderboard, and everyone was hopeful for day two.

Day Two started at 8am again with less wind and some light rain. It was blowing about 24 miles an hour which was somewhat better, but more importantly, the big gusts from day one had stopped. Once the rain subsided and the clouds began to break, the sunlight shone through, fantastic news for spotting sailfish.

Not long after, at 9:55 am, Captain James “Bucko” Platt of team No Slack reported a release. About half an hour later, at 10:26 am, team Big Game reported a hookup, successfully releasing the fish shortly after. About half an hour later, at 11:02 am Captain Alex Bell of the Blue Magic reported a double-hookup! At 11:20 am Captain Marty Lewis of the Main One called in a release with Chris Cruger on the rod. Shortly after the Blue Magic I reported anglers Trever Cowieson and Wyatt Hogue completed the double successfully at 11:25am and 11:27am respectively.

Shortly after noon Main Attraction-Sails Call called in a hookup landing the fish three minutes later at 12:06pm, the angler was Alexis Bowcock who now had 2 Sailfish on the tournament and was sitting at the Top Female Angler position. One minute later, Vice Versa hooked up to a sailfish and by 12:53 they had reported the release with angler Scott Stoky on the rod. At 1pm Silent Hunter/ReelEstate’s successfully released their second sailfish of the tournament this time with Dallas Twist as the angler.

The last two hours of fishing was relatively quiet, with several boats catching Cobia but no Sailfish hookups. At 2:57pm, with merely three minutes left of the fishing portion of the tournament, Captain Ariel Medero of the Big Game reported a hookup! Dianne reminded the teams over the radio that Big Game was allowed to finish fighting their fish according to the rules and a successful release would count provided they released the fish before 4pm. In storybook-like fashion, team Big Game released their fish at 3:47 pm just 13 minutes before the deadline; what an exciting finish!

The awards banquet kicked off at Aquarium Encounters in Marathon, Florida, and it was a fantastic event. Everyone raved about the delicious food provided by Brutus Restaurant & Seafood Market and Keys Rotisserie. The Trophies that Gray Taxidermy donated were magnificent and stunning. Several fishing Captains in Marathon also donated fishing trips for a silent auction. Eddie Forbes Art also provided quite a few beautiful artwork pieces with Marathon and Florida Keys Coastal themes used as prizes and auction items for fundraising. There was also a raffle with some great prizes and overall, everyone agreed the event was a success. Most importantly, Katie Lewis accomplished her goal of bringing a Sailfish tournament to Marathon, having enough money to pay out prizes to the winners, and still have enough proceeds to donate to a wonderful charity; Mission Fishin’.

Tournament director and founder Katie Lewis announced within 24 hours of the Awards Banquet that the event was a huge success and it would be happening again in 2023!