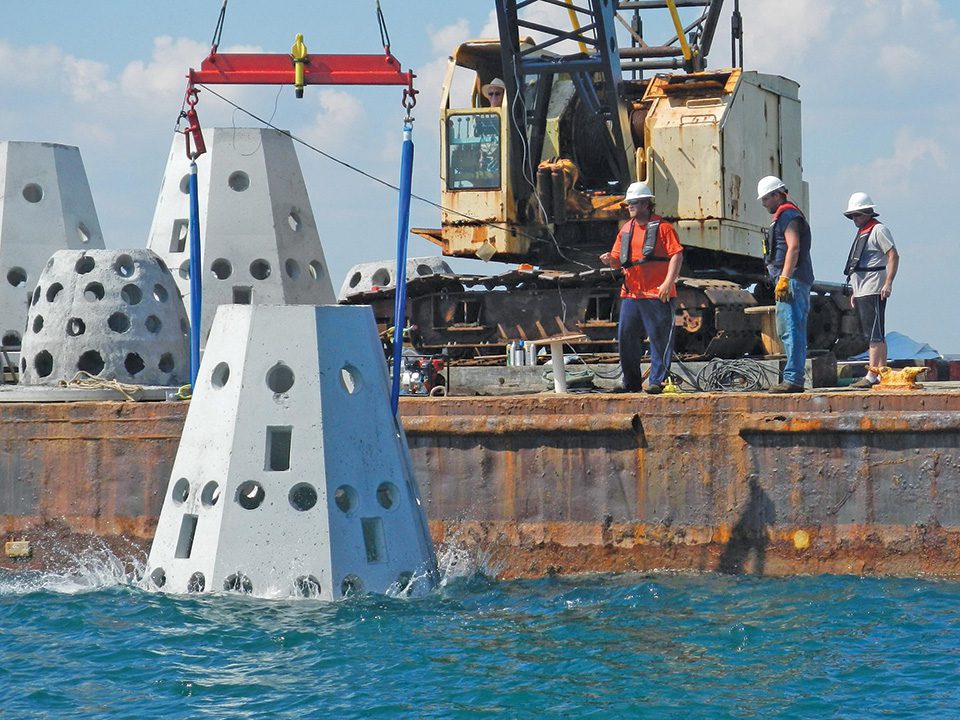 The construction phase for a massive artificial reef project is complete in northwest Florida’s Gulf of Mexico between Pensacola and Mexico Beach.

The $11.5 million project, funded with Deepwater Horizon restoration funds, saw 3,607 prefabricated concrete artificial reef modules deployed across 40 permitted areas between May 2017 and February 2021. Six different types of modules were deployed. Five module types were designed to provide reef fish habitat to enhance offshore fishing and diving opportunities. The sixth module type was specifically designed to create new nearshore kayak fishing and snorkeling opportunities, with the deployment of 693 beach-accessible disk reefs. All modules were deployed in state waters (within 9 nautical miles from shore) at depths from 12 to 80 feet.

Following the successful deployment of the modules, monitoring will be conducted for a minimum of three years at each site to evaluate recreational use and condition of the reefs as well as the species inhabiting them. Generally, the reefs quickly become covered with encrusting invertebrates and macroalgae and teem with a number of different recreationally important reef fish species including red snapper, amberjack and grouper. Aside from improved catch rates for recreational anglers, modules also provide reef fish with shelter from predators, new foraging grounds and the opportunity for improved growth rates.

The goal of this project was to replace lost recreational opportunities caused by the Deepwater Horizon oil spill by creating new reef habitats. Enhancing reef fish habitat within state waters through large-scale projects such as this increases reef fish populations and serves to disperse fishing pressure. The relatively shallow depth of these reefs also helps to improve reef fish survivability during catch-and-release activities through a reduction in barotrauma.

The addition of these artificial reefs provides new locations for anglers and divers to visit and a better overall fishing and diving experience.

FWC has proposed a second phase, Florida Artificial Reef Creation and Restoration – Phase 2. This second phase, estimated at $10.3 million, would be implemented in both federal and state waters adjacent to Escambia, Santa Rosa, Okaloosa, Walton, Bay, Gulf, Franklin and Wakulla counties. The goal of this phase would be to provide a greater diversity of materials and locations to maximize recreational benefits across an even broader geographic range and accommodate a greater variety of marine fish species to satisfy a wider spectrum of user groups.

To find out more and to download the Florida artificial reef map and database, visit MyFWC.com/ArtificialReefs.