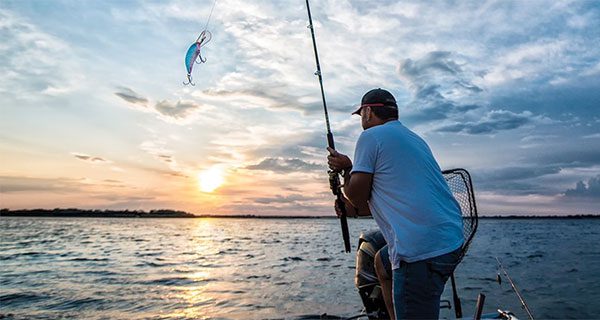 The beautiful Lake Murray, also known as The Jewel of South Carolina, is located in the Midlands of South Carolina, just outside of Columbia. It is a sprawling 50,000 plus acres with over 500 miles of shoreline. The lake is a staple in SC for striped bass, largemouth fisherman, and is known as a herring lake which is the predominant foreage for all game species. The lake can be broken down into three sections: the upper end (a.k.a. The river area) where the Saluda and Little Saluda Rivers come together to form Lake Murray; the mid-lake area which starts around the Buffalo Creek area and goes down to the Dreher Island area, and the lower-end which covers from Dreher Island down to the dam. These three sections offer multiple options when it comes to bass, striper, and catfishing. There are also some great panfish species.

Let’s start with the upper end, this area of the lake is more bluegill, crawfish, and shad foreage for the anglers that aren’t familiar or comfortable with the herring bite on the lower end. There is tons of coverage including bank grass, willow bushes, lay downs, ledges, humps, etc in this area for both bass, catfish, and striper fishermen. The mid-lake area starts to get into the herring feeding schools where you can find a mixture of largemouth or stripers or mixture of both. You also have a lot of bank cover, such as docks, standing timber, bank grass, etc. The lower-end is predominantly your schooling and off-shore style fishing because the predominant foreage in the area is the herring. The fish on the lower end are a lot more nomadic, stripers and bass tend to roam a lot more in search of the herring. If you go after the herring bite, keep in mind that the herring like bright sunny days, so you will find them near the surface on these particular days. As of recently, there have been multiple five plus pound largemouth caught regularly along with stripers that average from a couple of pounds to ten-to-fifteen pounds that have been caught during local tournaments.

The weekend of June 11th & 12th, the American Bass Anglers AFT Division 96 held their two-day championship tournament on Murray. There were multiple five fish limit bags weighed in that were over fifteen pounds, and the overall heaviest weight was almost thirty-three pounds for two days.

There are numerous guides in the area that can accommodate whatever type of fishing you want to get into.You can also checkout the Lake Murray Tourism Information Center at www.lakemurraycountry.com.