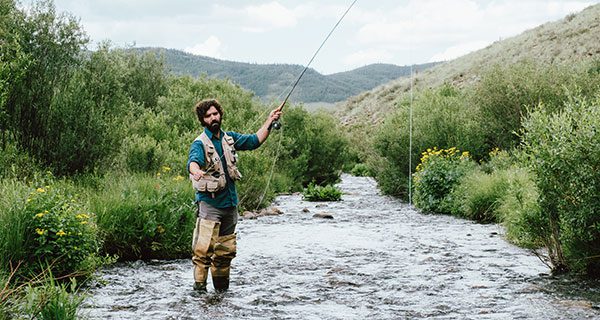 After college open mic nights proved more important to me than the paper that I received declaring a ‘BS’ in psychology, I decided to set out in my SUV with a couple of guitars in the back seat, to try my hand as a touring songwriter. That journey has been an education without end, providing an indispensable, cyclical process of inspiration by way of travels that inform the next song that I then play on the next tour. I probably anticipated, or at least hoped for that exact process, but I had no intuition that this journey’s second-best perk would be the making of so many fishing buddies across the United States, one among them I’d consider perhaps the finest soul I’ve ever met.

Perhaps I should have seen it coming. I’ve been an angler longer than I’ve been a songwriter. As a kid, long before I picked up a guitar, I bought a cheap fly rod and an instructional VHS, hawked by the ESPN Saturday morning fishing shows, and I managed to tie an absurd number of unintended knots in that fly line learning how to fly cast in my backyard. Ever since, fly fishing has been the majestic apex of my attempts to convene with nature, though with all the touring, I’d probably never get out on the water were it not for the invitations of strangers who invite me to their favorite spot the morning after a show. Come to think, I didn’t even own my own a decent rod and waders until a couple of years ago. I hadn’t needed to. I’d always borrow a rod and waders from a generous soul on the road, and on a lucky day off, I’d follow them down the bank to some lovely spot familiar to them, and priceless to me. I’d like to think that the sharing of these songs is sort of opening a window into my soul to strangers, and an angler sharing their favorite stretch of a river is, to them, a similar sharing.

I made one such friend after a show in Tuscaloosa. An older timer with a big, strong handshake who introduced himself as Jim and said, ‘I hear you’re a fly fisherman.’ Jim was a lover not only of fishing, but of old guitars, Cajun cooking, and literature. There was no end to our conversation. This is no hyperbole when I tell you Jim was the model of a man, not tall, but towering in every other way. He had the kindest heart, strong shoulders, and though about twice my age, he spoke to me like a peer. Soon enough, we were fishing buddies, and went on several trips, and I ain’t talking ‘the local pond’ trips. Jim took me to Saskatchewan to fish for giant dinosaur pike on the fly in water so clear you’d see the beasts approaching your fly and just have to keep stripping while your teeth chattered with excitement. We fished giant private lakes near his childhood home in Lake Charles pulling out monster bass and though, I admit I’d switched over to a spinning rod, Jim stayed true to his fly rod, even choosing to fish with his own tied flies for the pride of fooling the fish with his own creation. It was over the post-fishing dinners and wine that I’d learn just how much Jim believed in me as a songwriter. Jim was a man of more books than I’ll ever read. Words were everything to him, and his belief in mine filled my heart up. I’d never felt such friendship with a man as much my senior as Jim, and it was nothing short of the honor of all my journeying to have found a friend such as he.

I was in New York for a gig when I got word from a mutual friend that Jim had passed. He was on his fishing dock in Tennessee. He was fishing. I wish all the time that we could go on one more trip together, and talk more about the metaphor of the river we were standing in. I wish we could talk just a little further down that river, but alas, Jim has headed down that river in the sky, and I’ll bet he’d have wanted to do so fishing as he did.

The moments at which I am most thankful to be a songwriter are these moments of sorrow. The moments when my heart aches so, but a song is where I can put the memories, the feelings, so that I can get them out and put them somewhere safe that won’t be forgotten. I wrote a song for Jim called “My Brother,” because despite our age difference, that’s how he felt to me. In the first verse:

‘You’d make a plan to go out fishing. You’d call me up to come along. I revered you for your wisdom. You believed in my song. And the fishing guide, he was surprised to hear that we were no relation. But in a way, I believe we told him wrong. You were my brother.”

As I write this, I’m packing up for my first stretch of solo shows in years. I’ve graduated from the two guitars in an SUV to a van and a trio of musical compatriots, which leaves little time to consider wetting a line, but since it’s just me on this run, I’m bringing a fly rod and a certain box of flies. It was Jim’s box of flies. I’ll sit at the edge of a pond in Tennessee, and I’ll go through those hand tied creations, and I bet I’ll fool a bass or two thanks to Jim. I don’t know that it was ever lost on me, but Jim’s memory galvanized those moments when I’m able to take a morning amid the endless touring, quiet the ambition and the motion in my mind, and discuss with a near stranger, rods in hand, the metaphor of the river that just keeps moving around us.

Andrew Duhon is an award winning singer songwriter and a lifelong fishermen. His fourth album, “Emerald Blue” is out now.