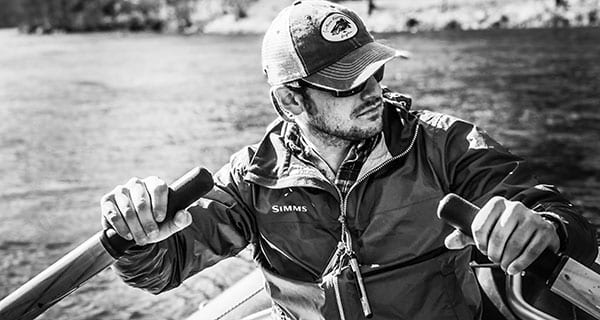 There’s a lot of debate in the fly fishing community about tippet sizes for trout. Some anglers swear fishing 7x on one particular river will make the biggest difference in whether someone catches fish or not, and others say it doesn’t matter at all. It’s natural for us to want to argue about it, seeing as it is the direct connection between us and the fish. It can however, even for seasoned anglers, become very complicated in determining what size tippet to use for a given river/ fly/ technique. It’s another cog in the wheel that is the overcomplexity of fly fishing, but it doesn’t have to be. This is especially true for trout.

Most people associate moving to a larger or smaller tippet size with water clarity and the spookiness of fish. Granted, it’s logical; however, I think that fish get more line-shy based off of presentations they see rather than whether they can physically see the line or not. Studies on bass have shown that individual fish in clear water can see 6lb fluoro about as well as 15lb fluoro. The biggest difference to me is whether the fish associate the line with a threat. This does make sense when you think about heavily pressured/lightly pressured trout fisheries. I’ve used tippet sizes as heavy as 3x on lightly pressured trout streams that hardly see angling pressure and caught plenty of fish. If I were to repeat that on a stream like the Davidson that sees angling pressure daily, I probably would fare much worse. Again, I’m sure trout can see 6x as well as they can 3x to a certain degree in clear water, but the difference is whether the trout associates it with a threat or not.

There is a difference between monofilament and fluorocarbon in the way both reflect/absorb light, stretch, and last against the elements. There are advantages and disadvantages to both, but the differences per manufacturer are numerous. We won’t even attempt to go down the rabbit hole of “the fish can see mono better than fluro.” Since we cannot see in the same spectrum that trout can, it’ll be a debate that goes on until the end of time.

With all that said, I break down my tippet size based on three main factors: the size of the rod I’m using, the wariness of the fish, and the presentation I am trying to achieve. Lighter trout rods in the 2-4 weight range are excellent for fishing tippet sizes in the 5-7x class. This is due to rods in those weights having, in general, a much softer tip that allows them to protect that lighter line during the hookset and when fighting a fish. The heavier the rod, the generally heavier flies you’ll be throwing, and thus a stronger tippet is needed to compensate for that.

‘Spooky fish’ also doesn’t mean that you always have to scale down to the smallest tippet sizes known to man. I mainly use smaller tippet sizes as a means of getting flies down deeper at a faster rate in the water column, or for fishing very light, small dry flies on a slack leader. I don’t really consider whether the fish can see the line or not: I just try to make my presentation as natural as possible to the fish. The Davidson is a great example of this. Many people think that 7x is the only line size you can use due to the pickiness of the trout. I promise, that’s far from the truth. The line size doesn’t mean anything if a fly isn’t correctly presented in the first place.

Overall, if I had to pick one type/ size of tippet for trout, it would be 5x fluorocarbon. Mainly for its versatility when fishing with different types of flies/techniques and its breaking strength compared to other tippet sizes. As I’ve written before, it’s the presentation of the fly that matters more than anything else. If you focus your attention on that, and keep everything else simple, then you’ll have greater amounts of success on the water.