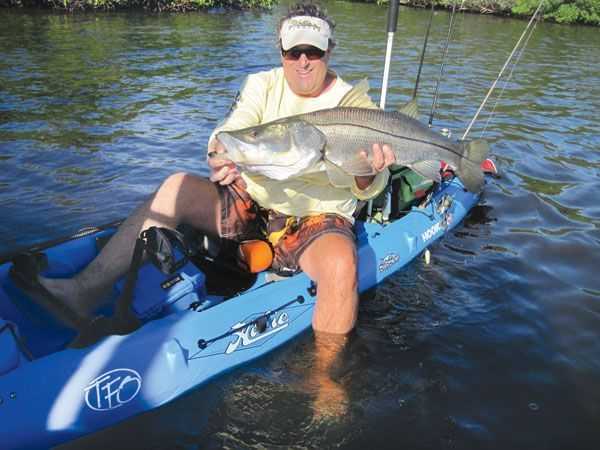 Much like the Power Pole has revolutionized the way powerboat anglers anchor, the stake out pole has given kayak anglers the ability to stop on the dime and stay put. During kayak fishing’s infancy the standard was a three-pound folding anchor that might or might not open after you dropped it. Although serviceable, it often led to anglers drifting over their targeted fish, especially if the wind picked up to more than a light breeze. While kayak fishing lends itself to being a simple low-tech way to pursue fish, yak anglers are quite ingenious when it comes to creating tools to help them maximize their ability to catch their targeted species.

When shallow water paddle fishing anglers found themselves blowing out too many fish, the cogs started churning and the quest for a better way to stay put was on. Some grabbed broom handles, others pulled the heads off golf club shafts and, in my case, I put the butt end of an old surf rod to good use. Some of the more Home Depot savvy anglers turned to PVC. They could customize their desired length and pick out the proper diameter to fit through the scupper holes of their Sit-On-Tops. Some of the more ingenious placed dowels inside the PVC and added fittings to make T-handles. Kayak accessories manufacturers took notice. Now several companies like Wang Anchors, Yak-Attack and Stick-It Pins make stakeout poles from quality materials that are built to last a lifetime.

One of the main reasons that I prefer the pole to the traditional anchor is that it also serves as a brake. Whether you are on the flats stalking tailing fish or approaching a feeding frenzy, you want to be able to stop on the dime and keep yourself far enough back from your quarry as to not spook them. Here in Florida a lot of the flats are crystal clear and littered with sand holes. The game fish like to hunker down in the potholes and ambush bait as it comes through. Often, when you throw a conventional anchor, even if you manage to stop in time, sometimes the anchor will not stick and you will find yourself drifting over the potholes sending the residents scurrying. With the stakeout pole, once you drop the pole in your rear scupper hole, you will stop, stay put and get to the task of landing your trophy. Another nice use for the stakeout is that it gives you the ability to pole and make a stealthy crawl to put yourself in perfect position to make the perfect cast. The stakeout is also great for poling your way towards the fish you are targeting even from the seated position. The pole does not cast shadows like your paddle, just adding to your stealthy approach.

Some anglers still prefer using a traditional anchor in shallow water. If this is your preference, try to go with an upgrade anchor like the SeaClaw that will consistently stick and hold you in place. I also suggest adding a cleat to the side of your boat so you can tie off your anchor at the desired length. An anchor trolley system is a nice option to add so you can position the nose of your kayak to have a direct shot at your target.

As rapidly as the industry is growing, I can only imagine that which the future holds for anchor systems. I can’t wait to see what the tech geniuses come up with next.