Del Rio, Texas is home to one of the world’s greatest bass fisheries. It has a long and storied past that much has been written about, but boy oh boy, until you see it, it’s hard to believe.

I arrived when lake levels were way down, so far down that many of the boat ramps don’t reach the water. I’m told it’s still 250 feet deep and won’t fill completely back up until a hurricane blows past Brownsville, Texas and dumps rain in the surrounding desert!

The lake is fed by three rivers and has an immense number of coves, points and canyon walls to fish. So, when I decided to launch my Vanhunks Mahi-Mahi, I chose the closest put-in off Spur 454. It’s the outflow from the Devils River, and I didn’t want to be to exposed to the chilly winds of early April. 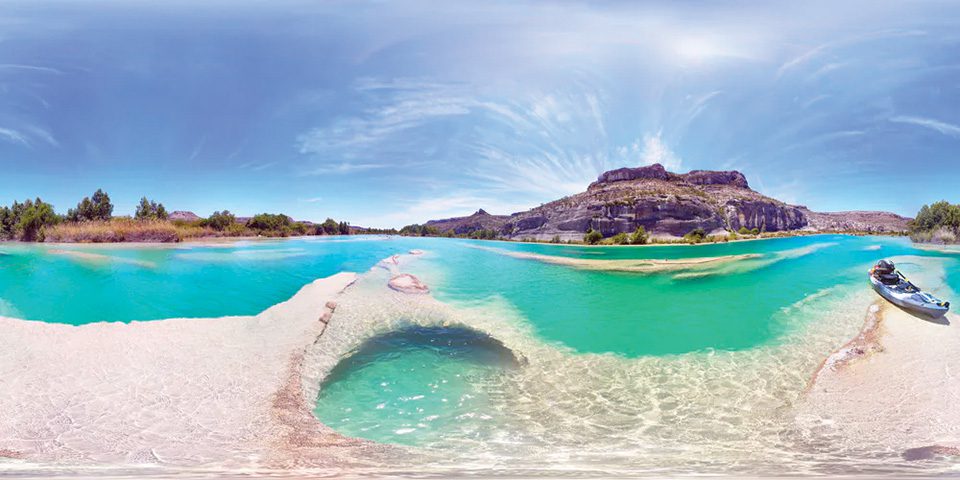 To my surprise, I was spooking fish instantly while I got my bearings. In gin-clear water, fish were cruising out to see me passing by.

I carried an arsenal of rods loaded with what I believed would get the job done. Without hesitation, I fired off three or four different lures but couldn’t seem to get their attention. Since I’ve never fished here, it was a guess on my part where to begin, so I peddled over to a cliff line directly opposite the launch only to realize that it was a submerged canyon. I finally reached the bottom with a drop-shot rig at approximately 100 feet, straight down off the face of this wall!

I heard there were smallmouth bass in this lake, and they love deep cliffs, so I dropped a chartreuse-tailed, wacky-rigged worm straight down and bagged my first fish on the first cast. Sure enough, it was a “smallie,” and on my second cast I caught another smallie.

I was thinking: “Hey, there’s no largemouth bass, which Lake Amistad is famous for, but I’m catching fish!”

I began working my way across this cliff line when the biggest largemouth bass of my long fishing career came to the surface and threw my hook. I was heartbroken and had this huge adrenaline rush, because it was huge… maybe in the 10-pound range!

This scenario repeated itself for about three hours unabated. I managed to boat about 15 beautiful largemouth bass, many in the 4- to 6-pound range, but the biggest of them shook my gear off. I never boated a trophy. As the action began to wane off a bit, I saw why Lake Amistad, out in this seemingly barren landscape is a true bass destination!

I want to give a shout out to this awesome little bait shop called Karleens, where Roy spent a whole bunch of time bringing me up to speed; look them up on route 90. It’s A Wild World—Get Out There!