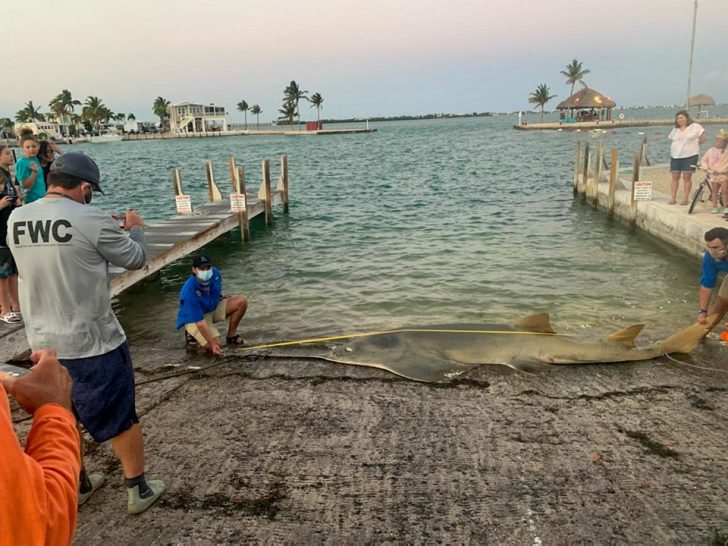 FWC sawfish biologists responded to sawfish hotline reports of two large smalltooth sawfish that died in the Florida Keys this week. One was a mature 16-foot female that weighed an estimated 800-1000 pounds and the other was an immature female 12 feet, 4 inches long and weighed an estimated 400-500 pounds. The 16-foot sawfish (pictured) is the longest measured by scientists since research began on the species. There was no obvious cause of death for either sawfish; however, valuable life history information was and will continue to be collected from both carcasses due to the swift response from Keys-based FWC staff and MCSO – Florida Keys to secure the carcass for study. Sawfish biologists are working to learn as much as possible from samples they collected. For example, the vertebrae will be used to determine the ages of both sawfish, the DNA will be sequenced to compare to other sawfish that have been studied throughout Florida, and the length at maturity for females will be fine-tuned based on these data.

How can you help the endangered smalltooth sawfish? If you see or catch a sawfish, let us know:
• Call our sawfish hotline: 844-4SAWFISH
• Email: sawfish@myfwc.com
•  Submit a report through the FWC Reporter app.