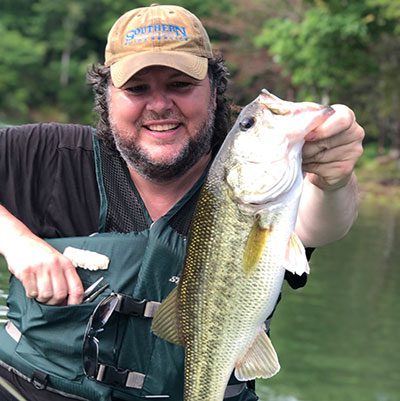 I find myself in a strange tug of war these days, where I am both longing for those activities that put us with lots of other people – like a concert, festival, or even a crowded movie, while I am simultaneously wanting to isolate myself more and more from contact with people. About the only thing that gives me satisfaction on both sides of that contradiction is fishing.

Numerous times since our social lives changed due to Covid-19, I have been able to enjoy the solitude and peace of being on a body of water chasing fish, as well as found enormous joy from interacting with other people who were also out doing the same thing. But over the past month or so something is changing.

It seems that there’s almost no corner of life that doesn’t have the divisiveness and tension of politics reaching in, with its often ugly tentacles, causing people to get angry with each other – even in settings where no anger should exist between people. Whether it’s just going to the store to buy some groceries, walking around a local park or yes, even fishing. While on a recent camping trip, we had to endure a family that seemingly felt it was their duty to continuously and loudly race their golf cart round and round all day with their oversized political candidate flags flapping above and behind them as they treated the week as a campaign rally more than a quiet get away to nature.

As people have felt more and more defensive about their selected affiliations and agendas, they seem to want to push said positions more aggressively onto others. In another example, I went in to two stores yesterday and ended up having my visits disrupted by confrontations between people yelling at each other over masks, correct change signs, or folks not following social distancing. My personality is that I can’t sit by and see someone acting the fool and abusing someone else without responding. Often my attempts to be the peacemaker end up leaving me feeling frustrated for hours after the fact.

These encounters are wearing on me. And I’m guessing I’m not alone in that feeling. So why write about it here, in The Angler Magazine? For most of my life, fishing has been my refuge. It’s been my go-to activity to burn stress, to relax, to recharge and to find inspiration. The fishing community has also been a means of being involved in conservation efforts, in youth programs and in encouraging people to get outdoors. And it still feels like one place where we can all still enjoy being together in a shared desire for joy.

I feel we, as anglers, have a role we can play in offering some calm in the current societal storms we are facing. First, let’s agree to not take that cast when we see something political come up that triggers us and let’s not do things that will trigger others – at least while we’re out fishing. Think of it as a catch and release program for opinions. Save it for another setting. Second, let’s invite some folks out fishing. Especially people that may not have been in a long time – if ever. If we can’t find common ground on the water, in nature, then where can we? Maybe if more people got the chance to find out that tying on can help them disconnect from the stress and tension, then there’d be some more room for remembering that there’s more that binds us than divides us.

Matt Mittan is daily afternoon host on Biz Radio Asheville and the co-host of “Matt and Michele Outdoors”. Find out more by visiting www.MattMittan.com.