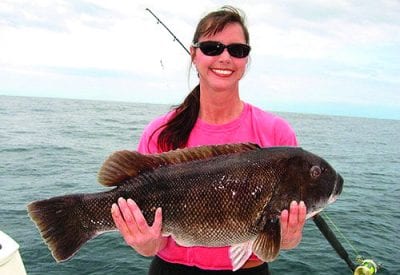 According to the calendar, Spring officially begins this month. Anglers can look forward to a warming trend over the next month, easing water temperatures into optimal range for newly arriving species.

March is one of the best times of the year for targeting tautog off Virginia, with some of the largest fish of the year often caught this month. These larger tog can be found lurking on coastal and offshore wrecks through the end of March. The inshore tautog bite will begin to heat up by the end of the month. Look for lots of fish averaging to around 6-pounds coming from the Chesapeake Bay Bridge-Tunnel area, with some fish likely to push to over 9-pounds. Other bay structures, such as the Concrete Ships and lower bay wrecks and rock piles are also good places to try for tautog later in the month. Crabs and fiddler crabs are the top inshore bait, if you can find them. And although plenty of jumbo seabass will also be compete for your offerings on these same structures, these fish are out of season until May. Keep in mind that when seabass season opens again, this year you are required to obtain a no cost recreational seabass permit in addition to your regular fishing license.

As now it has become the norm, once again the winter striped bass fishery never evolved off the Virginia coastline, but anglers will now have a chance to intercept big rockfish as the schools track back towards bay waters, heading for their spawning grounds. Later this month or early in April, these fish will move up into the spawning areas within the tributary rivers of the Chesapeake Bay, such as the York and James Rivers. Check the regulations carefully for the spring striped bass trophy season before you target these fish.

There are limited reports for speckled trout and puppy drum, but these fish are a possibility in most backwater locations and inlets, although the hard freeze killing a large number of this population at the beginning of the winter season will likely take its toll. Once again, time will tell, especially with the onset of spring.

Flounder will debut on the Eastern Shore within the seaside creeks of Oyster and Wachapreague this month. Live minnows or a combo of squid and minnows are a good choice for early season flatfish on the Shore. Drifting along the edge of creek channels with a moving tide will provide the best action.

On the deepwater scene, lots of nice blueline tilefish and other deep bottom dwellers such as golden tilefish, blackbellied rosefish, and grouper will continue to respond along the ocean floor and near the edge of the Norfolk Canyon. The heavy dogfish infiltration will pose a problem accessing these fish in over 300 feet of water, so expect to weed through plenty of these trash fish to reach the edible species.