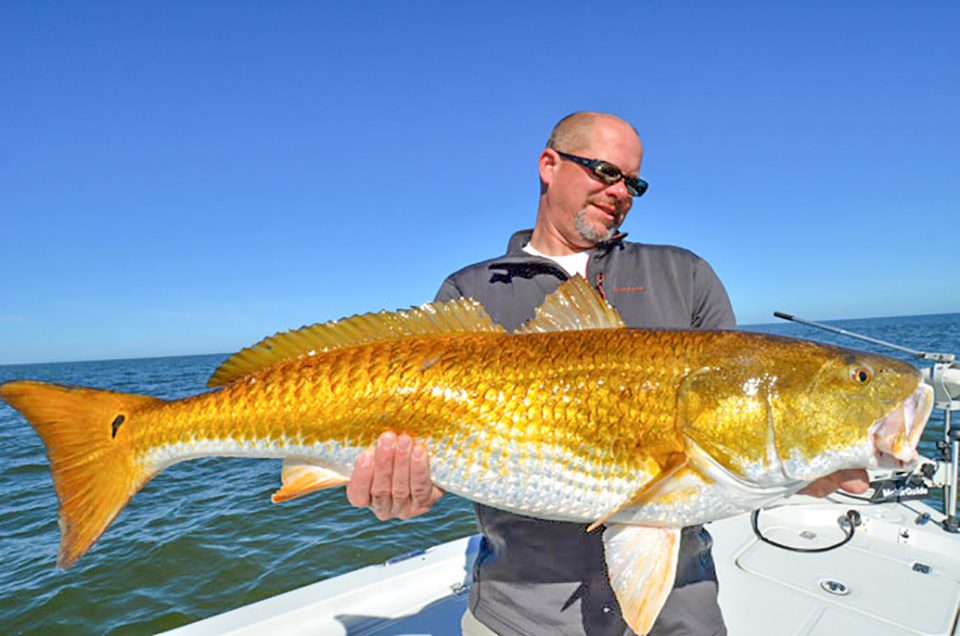 The red drum, redfish or reds range from New England to Southern Florida, and from Southern Florida to the Northwest Gulf of Mexico. It’s one of the most targeted game fish wherever it’s found. Sport fishermen pursue them for their potentially large size, beautiful copper color, abundance, fighting ability, and delightful flavor.

In the early 1980s, Chef, Paul Prudhomme’s dish of Cajun-style blackened redfish became so popular that redfish were overfished to the point of near extinction. Today, regulations and stocking programs have brought the populations back from the brink and continue to maintain stock levels after large storms and environmental events like red tides that have plagued the Southern Atlantic and Gulf of Mexico. 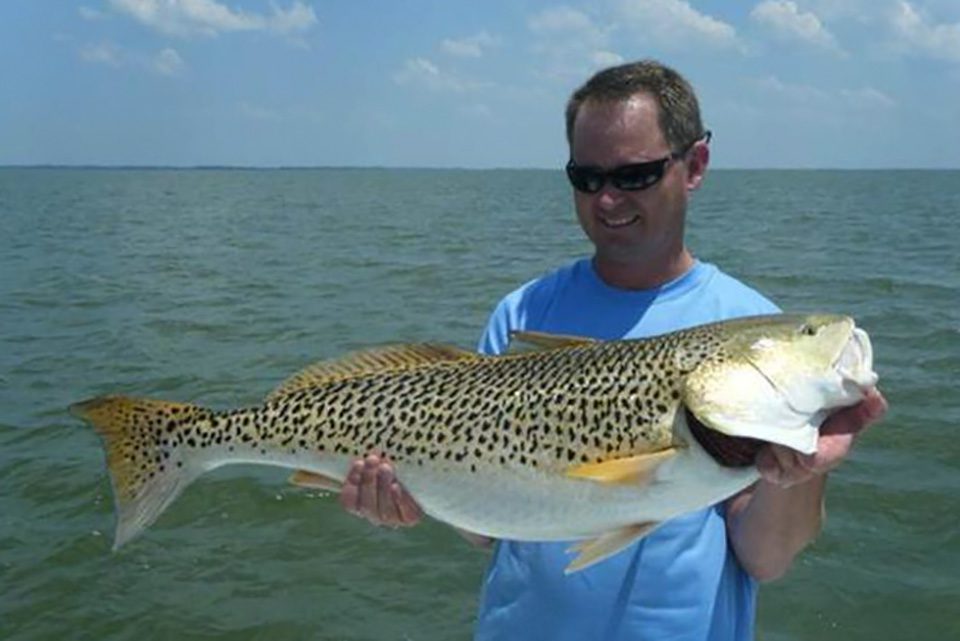 Though thought to be a separate species by some, it’s a genetic mutation that causes the multiple spot patterns found on some reds. This leopard red was caught in Louisiana, and is a beautiful example of how extensive this mutation can be.

Reds are dark brown to copper colored on top fading to a white belly. The characteristic identifier of a red is a spot, or a couple, at the base of the tail. The mouth points downward while the eyes are located high on the head. Their mouth is equipped with crushing teeth and pads to deal with crabs and shellfish which constitute a large percentage of their diet. They also feed on numerous species of baitfish. 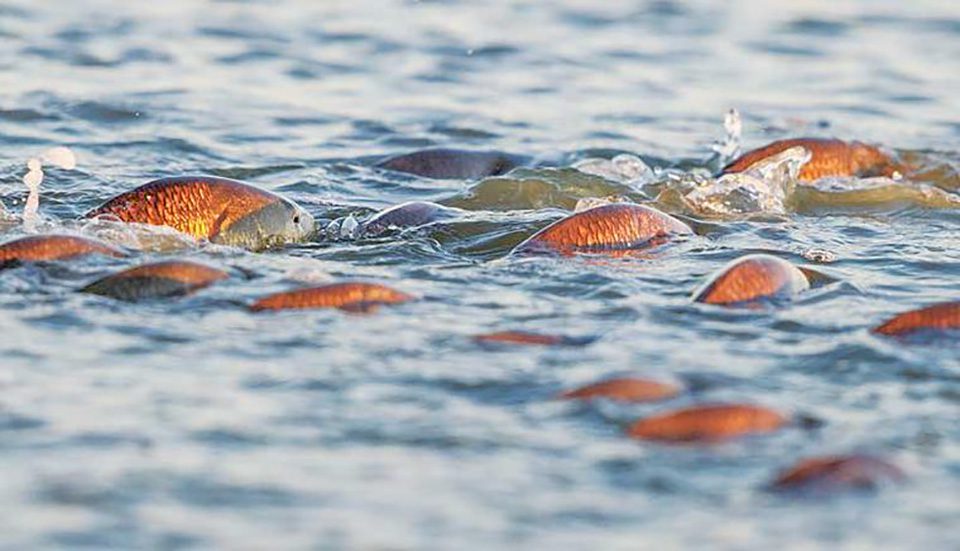 Redfish school in massive number each fall as the spawning and migration seasons coincide. You can also find large schools on the blitz anytime they are on the feed.

Spawn during late summer and fall occurs near estuary inlets and passes along barrier island beaches. Males produce drumming sounds using muscular contractions to vibrate the swim bladder, to attract females. The red drum’s eggs incubate for 24 hours. A female lays about 1.5 million eggs. About half of red drum are able to reproduce by age 4. Red drum
can live to be 60 years old. Adults mature by 3 – 5 years of age; approximate length at maturity: males – 28 inches, females – 33 inches. As red drum grow longer, they increase in weight exponentially. The world record red drum was caught in North Carolina, in 1983, and weighed a massive 98 pounds.

As Reds have recovered from the blackened redfish craze, they have become a dominant game species. Reds will take a live or dead bait, snatch a jig off the bottom, chase down a swim bait, or even crash surface lures when they’re blitzing. Fly fishermen do really well when targeting reds, as well.

If you live within the range of the red drum, you can find them in a variety of habitats that make them easy for anyone to target. So head out to the beach, a local island, find a nice inlet, set up on a bridge or check out a small tidal creek. With any luck, you can get all Paul Prudhomme, and prepare some blackened redfish for yourself. 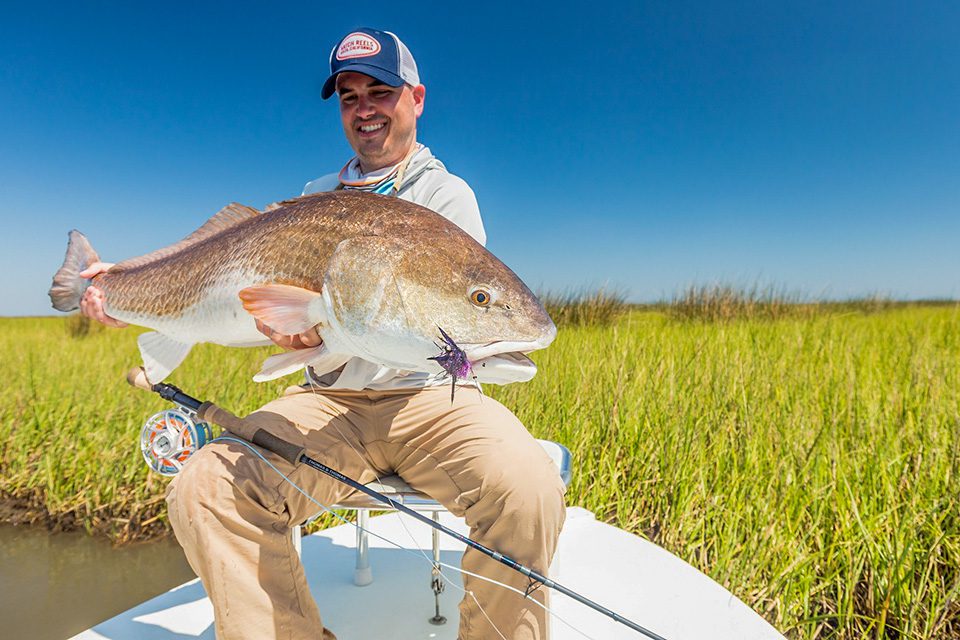 The resurgence of redfish has exposed more anglers to the deliciously-fun pursuit of fishing for them. Tournament circuits have developed and new tactics like fly fishing have caused a whole new group of anglers to love fishing for reds.