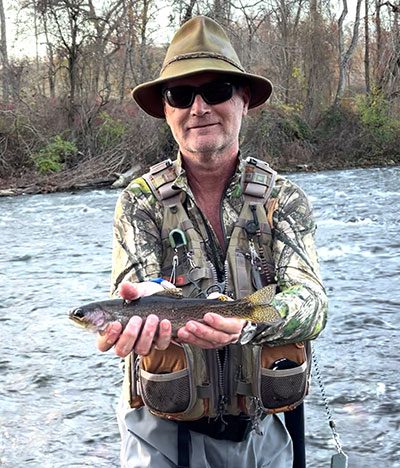 Two good ole’ boys decided to take a fishing trip to Alaska. Flying back home Leroy is crunching some numbers when he looks over at Billy and says, “You know Billy, from my calculations of what this trip cost us, I figure each fish cost us about two hundred dollars.” Billy thinks about it for a moment and replies, “Well, I’m dang sure glad we didn’t catch any more. I’d be broke!”

Having fly fished for over 45 years now, I’ve spent countless dollars on my hobby from equipment to trips. It’s been well worth it! Recently, I had a moment to reconsider that prospect.

For over 30 years, I’ve kept detailed records of each trip. The goal was to eventually have a database of information to use on subsequent trips to know where to go and what fly would work best under the conditions. It works well! (Costal Angler, Feb 2022) However, this created a monkey I had to get off my back.

At the conclusion of 2021, I had my second foot surgery in two years and I used the time to tie flies, clean my equipment and review my fishing statistics. I realized in 2021 that I had caught a total of 943 trout in 37 trips. Always the one to recognize a future goal, I considered what it would have taken to reach 1,000 in a calendar year. By my calculation, that would have taken a little over two trips. Just two more trips!

Going into 2022, the surgery required substantial recovery, which prevented my fishing until April. I did survive, meaning my wife didn’t kill me, though I did have to beg for a ride in the car around the block. I remember a dog we had, Scooter, who loved a ride so much, he’d lose total control of his tongue and it’d hang way out the side of his mouth. I now know how Scooter felt!

As I began fishing, I felt a sense of nostalgia, which led to my re-visiting streams I’d not cast a fly into since I was a teenager when Ronald Reagan was President. Perhaps a time to return to my roots, who knows, but this “tour” paid off in larger catch numbers. For example, in two weekend camping trips I caught 162 and 150 respectively. Then, there’s the day I approached the century mark and felt the urge to break my record of 101 in a day. I stopped at 2 pm with 104. All this drew me nearer to what had by now become a goal as I went over 800.

Having taken a month and half off from mid-September to November, I looked at my status and found that I was only 23 trout away from 1,000 in 29 trips. I figured a good day, or at least two decent days, would get me there. Have you ever noticed how the closer you get to an opportunity or goal, the tougher it becomes and the more things go wrong? With football teams, it’s injury or other mishaps. On my first trip in a while, I had both!

The day started off quickly with five decent browns within the first ten minutes. This is going to be easy! Then things slowed down. Moving to another location, I was able to land another 12 trout, leaving me now within six of my goal. Using a dry-dropper rig in a long pool, I landed a nice rainbow on the dry. The dropper nymph snagged my left hand just below the index finger past the barb! I quickly cut the line so the rainbow wouldn’t continue to pull it’s painful revenge on me. After releasing number 995, I grit my teeth and yanked the hook out with my hemostats. I didn’t scream…At least not on the outside.

With five to go now, I stepped up onto a jagged granite bolder, trusting my new popular brand rubber wading boots to grip. Wrong! In avoiding a face plant, I dropped my rod and reel, resulting in warping the reel so that it would not turn. Still, I caught number 996 on the next cast, bloody hand and all.

Hopping into my car as the sun neared the western horizon to move to a final location, I packed up my busted reel and four weight rod replacing it with my six-weight rod and reel for sunset streamer fishing. I caught number 997 in some pocket water using my favorite olive wooly-booger pattern. A few minutes later, in retrieving the fly to make a sharp back cast, I had forgotten about the overhanging sycamore tree trunk behind me. I broke my favorite six-weight rod I’d had for over 20 years! I made the long trek back to the car to retrieve my four-weight and attach my six-weight reel. Soon afterwards, I hooked number 998, followed a few casts later with number 999, a nice brown. Scratch that, it got off before I got the net under it. Frustration began to rise as fast as the sun set when my fishing buddy remarked something about is it worth it.

Still needing two, I went to the head of a deep pool. Looking at the sun setting on a distant mountain and feeling that monkey getting heavier as my chance of reaching my goal this trip plummeted, I cast into the deep, clear water. A nice, ten-inch rainbow slammed the streamer, which I quickly landed. Number 999 in the net and only one more needed.

There was now little daylight, very little. Last month at my wife’s fortieth high school reunion, an old school acquaintance described me in high school as a tenacious, goal setter. Still, never one to relent, I went back to the sycamore hole. Foolishness and tenacity would not allow me to back away from a challenge as I felt it was the best chance as I’d seen one there earlier that I wanted to take another shot at. With the last rays of twilight, doubt began to settle as heavy as a pair of water filled chest waders and I was beginning to doubt it would end today. I cast across the current and into a distant pool. As the current pulled the streamer out of the pocket, a rainbow slammed the streamer. As I drew the small bow into my net, the weight lifted, the monkey was gone and I had reached 1000! I cannot recall the last time I was so happy over such a small trout.

Over the past twelve months, I got a rebuilt, I call it bionic, foot. I was also blessed with a long, slow but gradual healing process followed by wonderful trips into my beloved Smoky Mountains with the best fishing buddies. Still, I’m wavering on whether those last six trout were worth a rod, a reel, and a barbed hook in the hand.
On second thought…Yeah, I’d do it all over again, just not with those high priced boots!

Jim Parks, a native of Newport, Tennessee, has spent forty-three years fly-fishing in the Great Smoky Mountains National Park, which he considers his home waters. Check out his book “Tails of the Smokies” in local bookstores. Jim currently resides in Kodak, Tennessee, with Trena, his wife and best friend of thirty-three years.