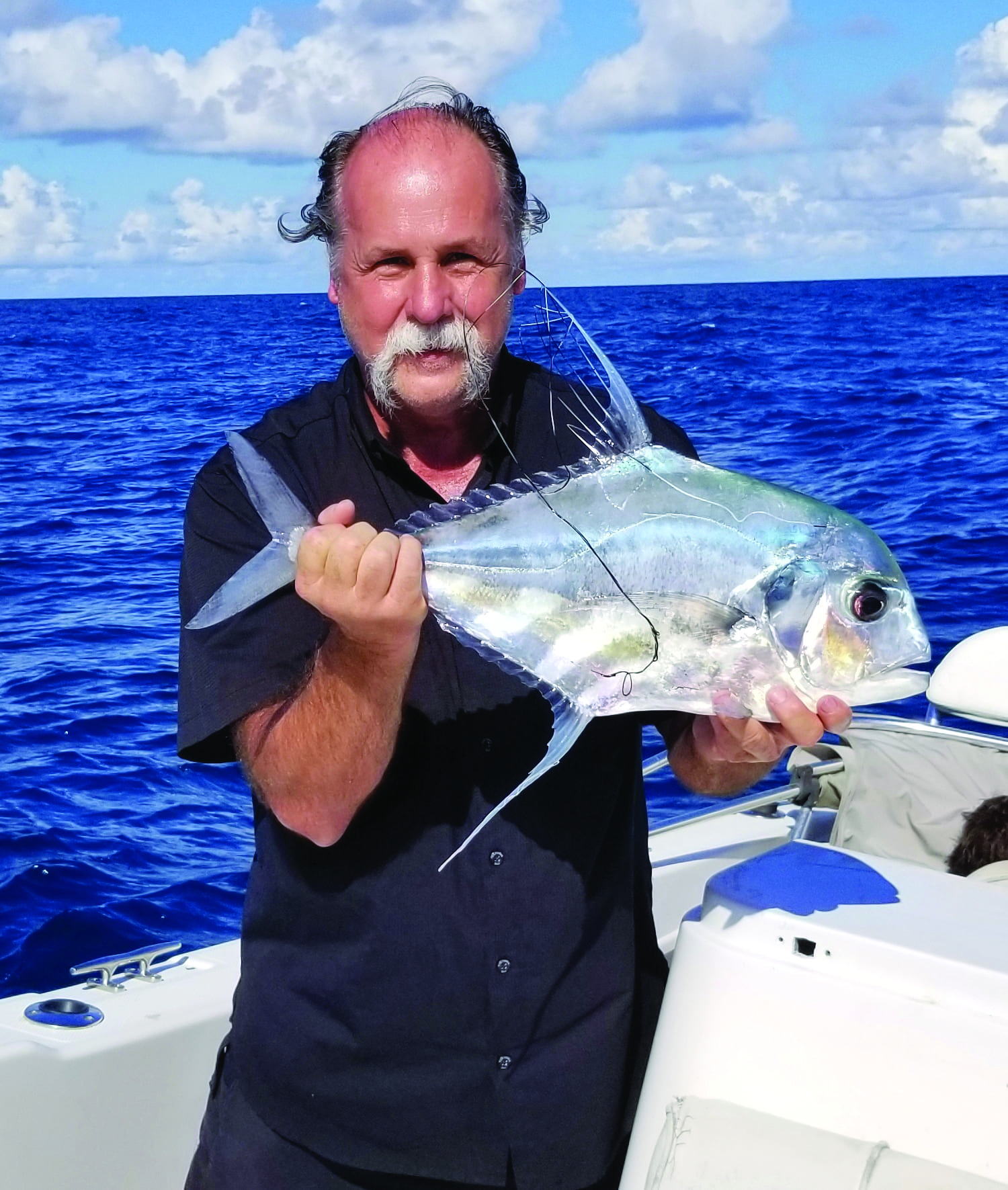 The rod doubled over and it was all Jack could do to hang on to it until his big brother Jimmy got over to help him. Then our friend Jacob grabbed on too. Jacob was on the front grip of the rod, Jack in the middle reeling for all he was worth and Jimmy on the rod handle. It was quite a sight as they worked as a team reeling in something from the dark blue bottom 115 feet below. They managed to get the fish up for a bit but then the rod pulled down really hard. Jacob was pulling up, but it just bent deeper. The fish turned and headed back, so they gained line on the reel as he neared the boat again. With a magnificent pull, the line suddenly went slack. At first it was thought the line had broken, but as Jack reeled it up there seemed to be a little weight left. Sure enough, out of the water emerged a jack crevalle head with the body bitten clean off. It seems their fish had been sharked! The fight may not have lasted but about 10 minutes, but man it was exciting!
I went on a business trip to central and southern Florida recently and thought I would visit a few customers and maybe squeeze in some fishing! While I was there, I stopped to see a customer and we toured the facility and talked about Purge Right purging compounds and various other business topics. Then I asked if he fished. He said yes, and I told him I wanted to catch some peacock bass and Mayan cichlid. He informed me that the canal across the street from them had both. That was great news!
Prior to coming to Florida, I had messaged a longtime friend, Chris Dean, who lives down here and told him I was planning to fish on this trip. He said he would like to go with me. We met at the canal and Chris’ son Jack caught the first Mayan cichlid. Then Chris caught one, and then I did.  (Yes, it’s kind of like bream fishing but much more colorful.) We had a blast until it started getting dark. Chris did get one hit from something big, but it broke off the line so, in our opinion, surely that was the peacock bass.
That evening over dinner we talked about possibly going fishing with Chris’ son, Jimmy. Chris finally got Jimmy on the line but Jimmy said his boat was in the shop. My face sunk as the dreams I had of catching some giant snook vanished from my mind like ice cream on a hot day! My mind had been racing full of giant snook and then my subconscious heard boat and shop. At that same moment my mind was racing, Google, guides, phone…
I spent the next half hour texting and calling guides, but with no luck. Nobody had any trips open the next day for peacock, snook or anything else. Later Jimmy called back and said he could take us to some bank spots he knew where we could catch peacock or snook in the morning. Things were looking up, and I went to sleep with visions of fish dancing in my head.
The next morning I checked with Chris to get the plan. No word from Jimmy yet, so I called on a couple of customers and then headed to Chris’ house. There we went to the nearby dock and looked at mullet schools of all sizes swimming by. Seeing fish makes you need to FISH!  Still no word from Jimmy, so we went over to West Marine for a little retail therapy. Jimmy calls and says he has a friend, Jacob, who said we can go snook fishing on his boat! Fireworks were going off in my head!
We loaded the boat, Jimmy, Jacob, Chris, Jack and myself, and headed through the mangrove jungle. Jimmy caught a tank full of bait as we made our way to the fuel dock. As we passed the inlet, we noticed the waves didn’t look too bad seaward. It was decided we would ride out and see how it was. We started fishing and the first fish caught was the jack crevalle that was sharked! Then we caught several snappers, triggers, cobia, amberjacks, a remora that latched onto the side of the boat when we were trying to release it, and an African pompano. That was my first African pompano. Wow, it had such an iridescent sheen and cool long dorsal fin.
We ran out of bait and headed back into the mangrove jungle to see if we could grab some more bait and a snook or two before dark. Jimmy caught more bait, and we started casting to the snook. We had several hits, but none of them hooked up. All in all, that was one fun afternoon. We parted ways, vowing to keep in touch and do this again soon. I headed back to Georgia the next day daydreaming of my next business trip to West Palm.
I’m not sure what next month’s article will be on, but remember, if you have an empty seat on your boat that needs filling, shoot me an email and maybe it will be about fishing with you! You can reach me at gary@purgeright.com . Please remember, if you are not going to eat it, don’t kill it.